I’m very proud of our local free community newspaper, the Mountain Xpress for its article on ham radio. Not only does the article give readership a short primer in the hobby, but it also profiles a variety of local hams–even an 18 year old YL.

This one is worth a read and goes beyond the boiler-plate local articles that usually follow on the heals of Field Day. I’ve included a few clips below:

On a stifling late-June day, a tangle of wires snakes through the open door of the Buncombe County Firefighters’ Training Center. Outside, the sun beats down and the roar of big generators fills the air; indoors, the atmosphere is even thicker, dense with a jarring concoction of radio static, Morse code and urgent voices.

[…]At first glance, the whole endeavor seems anachronistic. In an age of global communication, pervasive cell coverage and hundred-million-member social networks, what’s the attraction of basic, point-to-point radio communication? Who are these people who call each other not by name but by arcane strings of characters? What exactly are they doing?

[…]That fear may be unfounded: Today’s ubiquitous tech appears to be re-energizing the long-standing hobby. Pioneering operators have merged radio (an analog medium) with digital communication, and the Internet gives beginners a broad base of support.
“Amateur radio is very much alive and well,” says Bill Morine (N2COP), North Carolina section manager for the Relay League. “An awful lot of young people are coming out and seeing the merger of technologies between computers and wireless applications.”

Nationwide, there are 700,000 licensed hams — an all-time high, he reports. The licensing process is easy, Morine maintains, and ham radio’s staid image is no longer accurate.

[…]Carl Smith (N4AA) represents the old guard. Licensed in 1954 at age 14, the Air Force veteran and retired electronics salesman has logged more than 70,000 radio contacts, many from his home in Leicester. In ham circles, he’s a big deal: For the past 15 years, he’s published The DX Magazine, a bimonthly journal for serious hams with long-range ambitions.

[…]For some operators, service is ham radio’s primary purpose, and dropping the code requirement has unquestionably attracted many younger licensees. Eighteen-year-old Virginia Todd (KK4BRE), for example, got involved due to radio’s community-service opportunities and usefulness in emergencies.

“We volunteer a lot,” she says. “We did the bike race for Meals on Wheels and the Shut-In Trail Ridge Run.”

Paul Tilley (KK4BRD) says ham radio is just another communications tool he uses as a SKYWARN spotter. In foul weather, Tilley takes to the road in a truck equipped with a rooftop weather station, using his radio to report conditions to the National Weather Service. In remote areas lacking cell coverage, Tilley’s radio has enabled him to give people in the path of a storm time to prepare.

“There are storms that make it past the mountains that don’t appear on the radar at all,” Tilley explains. He’s had some close calls, including a lightning strike that destroyed his radio, but he stresses that he’s not a storm chaser. “Storm chasing in the mountains is extremely dangerous: You can’t see the weather coming.”

[…]That’s why emergency power is paramount on Field Day. But though the underlying purpose is serious, the event is also a chance for these operators to have some fun.

Watching Smith work CW is a jaw-dropping experience, and he quickly draws a crowd. Even while talking to those around him, he transmits so fast that the individual dits and dahs are barely discernible. Outside, other hams set up antennas in preparation for an all-nighter.

“This is my favorite day of the year,” says Tonya Campbell (WB0VDK) in between transmissions.

And as night falls, Marc Huennekens (KG4OPM) sets up a station in a tent in the bed of his truck. Using an old, tube-driven radio, he plans to log as many contacts as he can before falling asleep.

Back in the training center, the room is thick with Smith’s rapid-fire code, open-band static and low voices swapping stories. One old-timer recalls how it feels to be hit by lightning — twice.

After 24 grueling hours, the club has logged nearly 1,000 contacts. Smith alone worked 300 stations, transmitting all night and into the next morning. The allure of ham radio, he explains, is equal parts technical endeavor, community service and fellowship.

“Through ham radio,” notes Smith, “I can go anywhere in the world and know somebody and have a friend. I daresay your cellphone can’t do that.”

Read the full article in the Mountain Xpress online.

As I mentioned in a previous post, I’ve been on vacation in Prince Edward Island Canada.

This year, our vacation coincided with my favorite annual event, Field Day.
Sadly, I missed an opportunity to experience Field Day QRP-style with the NC-based QRP club, the Knightlites, on the Blue Ridge Parkway, along with my buddy, Vlado (N3CZ).

Before I left my trip up north, I contacted the Charlottetown, PEI, Amateur Radio Club (VY2CRS) and was glad to learn that they had planned a Field Day event on the farm of their club President, Andy Speelman (VA2AS). Better yet, the location was just forty minutes from the cabin where we were staying on PEI.

Perhaps one of the benefits we enjoy as amateur radio operators is that we’re all part of one enormous event, an all-inclusive fraternity of like-minded individuals. When I arrived on site at the Charlottetown Field Day location, I was greeted as if I was expected. The large sign at the end of Andy’s driveway was a great advertisement for the FD location.

They instantly put me to work…eating a hamburger. After all, you can’t work a radio rig without a little something in your fuel tank, right?

“Islander” hospitality is legendary, and frankly, reminds me of the way it was when I was growing up in rural North Carolina where “no one’s a stranger,” and you’re free to accept invitations (and meals) without hesitation. This local club went a step further, and from the moment I arrived, included me in their jokes, making sure to laugh not just at but with me. I felt utterly at home. 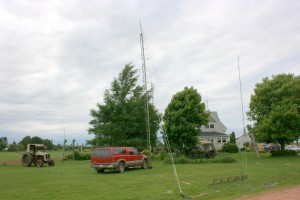 The club had a wide array of antennas up by the time I arrived. All of them had been constructed just prior to the beginning of the contest, and all were field-deployable. Andy’s farm is a wide-open space and with no limitations to big antlers, thus they even fit a 160M “V” doublet out in front of the barn where we operated.

Though I had only a few hours to play radio before heading back to my family at the cabin, they put me on the 20M almost immediately. In perhaps an hour, I chalked up 100+ contacts on that band. The guys got a kick out of hearing me call “CQ Field Day, CQ Field Day, this is VY2CSR” and then offering up our “3 Alpha Maritime” in my North Carolina accent.

It was also fun to get a quick word in with those NC stations I worked from the island, many of whom were set up only a few miles from my home QTH.

I made sure I saved plenty of time for chatting with the club members, too. After all, this Field Day event– like many others I’ve attended–was more about comraderie and fun rather than about raking in the scores and multipliers (not that taking it to a contest level is objectionable, of course).

Fellows in Charlottetown: if you’re reading this post, I surely thank you for including me in FD 2012, Charlottetown-style.

Readers, if you happen to be on vacation during Field Day, search for a local event. There’s sure to be one and you’ll most likely make some new friends and create some notable radio memories.