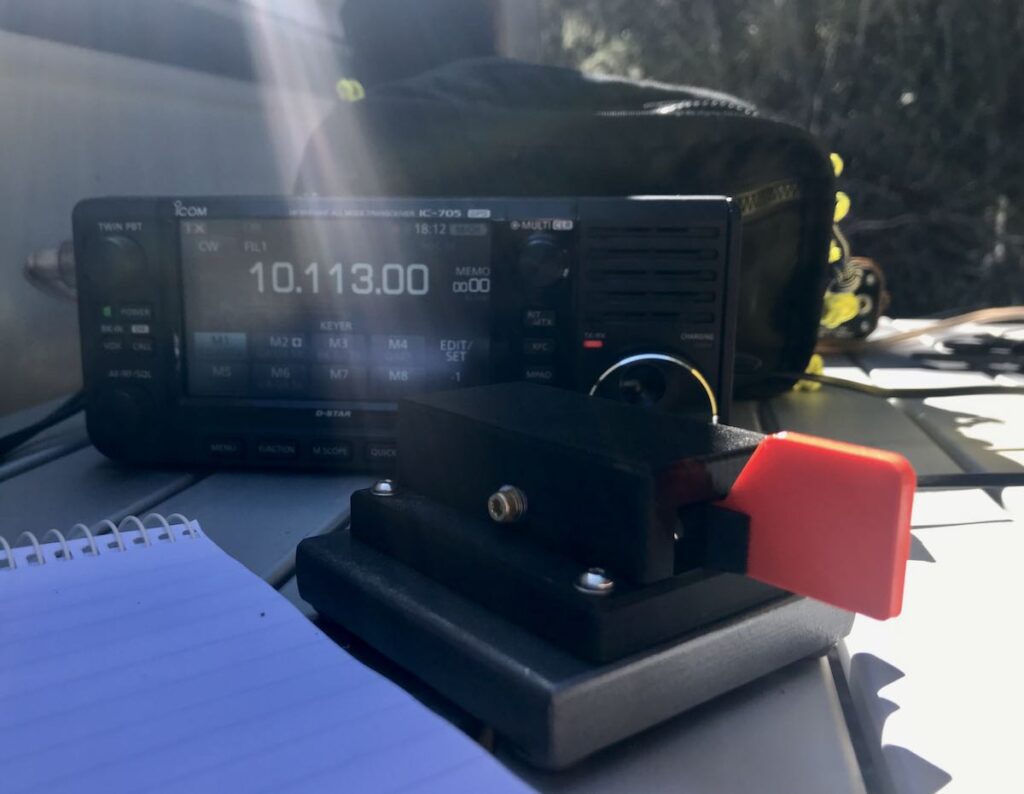 Thursday, I set out to test how long the Icom IC-705 could operate during a Parks On The Air (POTA) activation with one fully-charged Icom BP-272 Li-ion battery pack. This, following my listening endurance test.

I knew conditions were pretty terrible Thursday in terms of propagation, but that didn’t really matter. I intended to call “CQ POTA” in CW until the ‘705 finally shut down due to low voltage. In my head, I imagined this wouldn’t take much longer than 1.5 to 2 hours and during that time, despite propagation, surely I’d work 10 stations to validate the activation, right–? 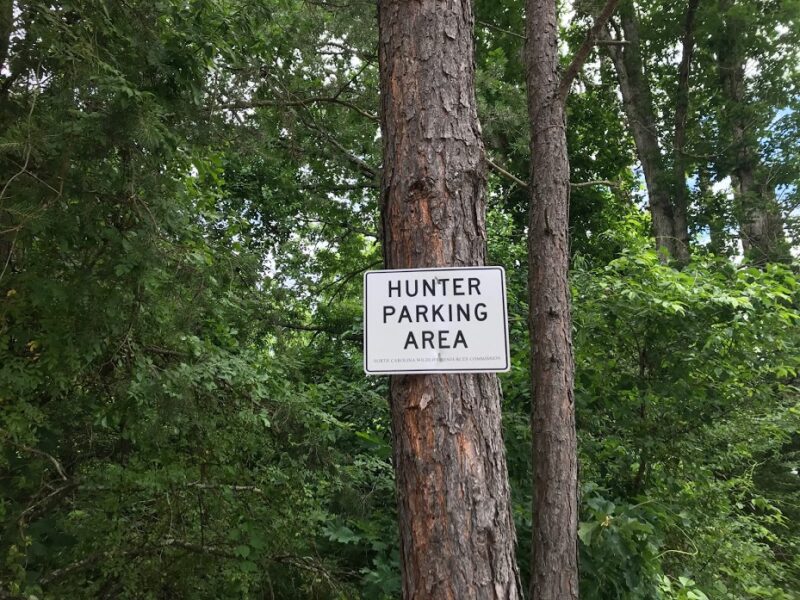 I picked Sandy Mush Game Lands as my test site. Since I’d been there before, I knew there were ample trees to hang the Vibroplex EFT-MTR end-fed antenna, and I knew I’d likely be the only one in the parking area as this site is secluded and this was not a designated hunting day.

Setup at the site was pretty straight-forward. I quickly deployed the EFT-MTR antenna–using my arborist throw line–in a “V” shape hanging over a high tree branch.

I picked the EFT-MTR because it’s resonant on my three favorite POTA bands: 40, 30, and 20 meters. Note that the IC-705 does not have an internal ATU.

Although I have an mAT-705 external ATU on loan to test, I didn’t take it to this first activation–I wanted to keep the set up simple for testing battery endurance. 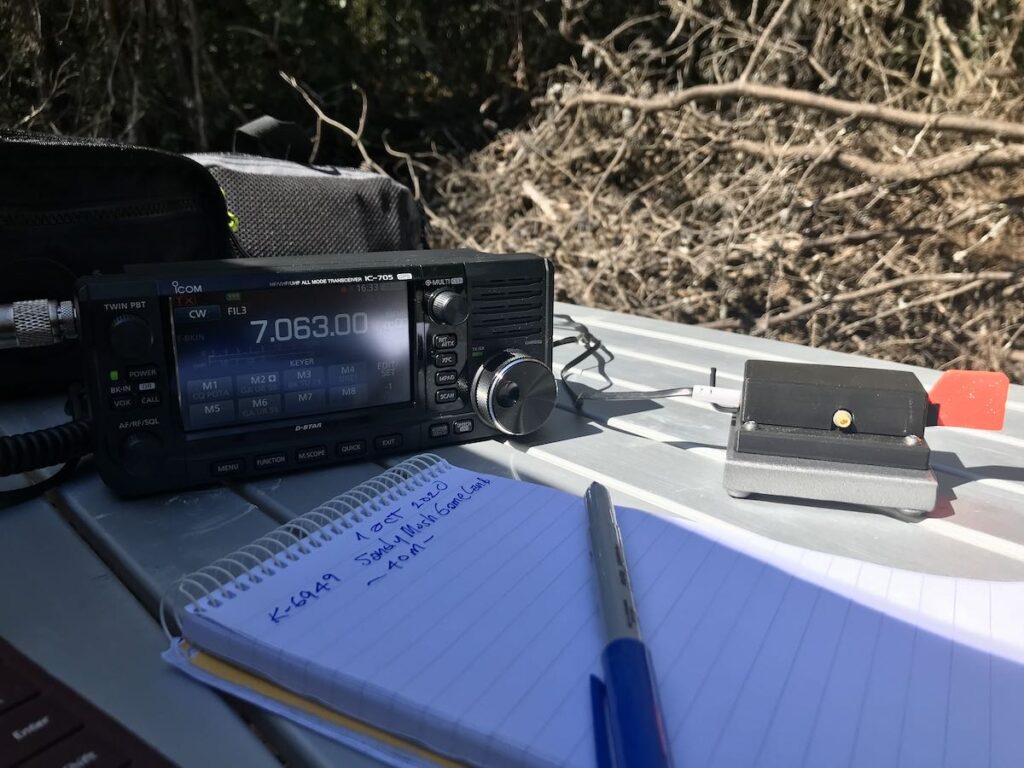 I started calling CQ at 16:30 UTC on the 40 meter band and set the IC-705 to beacon mode call “CQ POTA K4SWL.” No replies for 10 minutes. At that point, I discovered the POTA spots website was down for a scheduled upgrade (I have impeccable timing!), so I posted my spot on the POTA Facebook page.

Then my buddy Mike (K8RAT) sent a text message stating that the Reverse Beacon Network (RBN) had spotted me, but with a very low signal report. Hmmm….why would that be?

Turns out, I still had the IC-705 power level set to “0” watts (this story might sound familiar). Doh!

Note to IC-705 owners: zero watts is not zero watts!

I turned up the power to 5 watts (the max the IC-705 will achieve on a 7.4V battery pack) and was greeted by an instant CW pile-up. 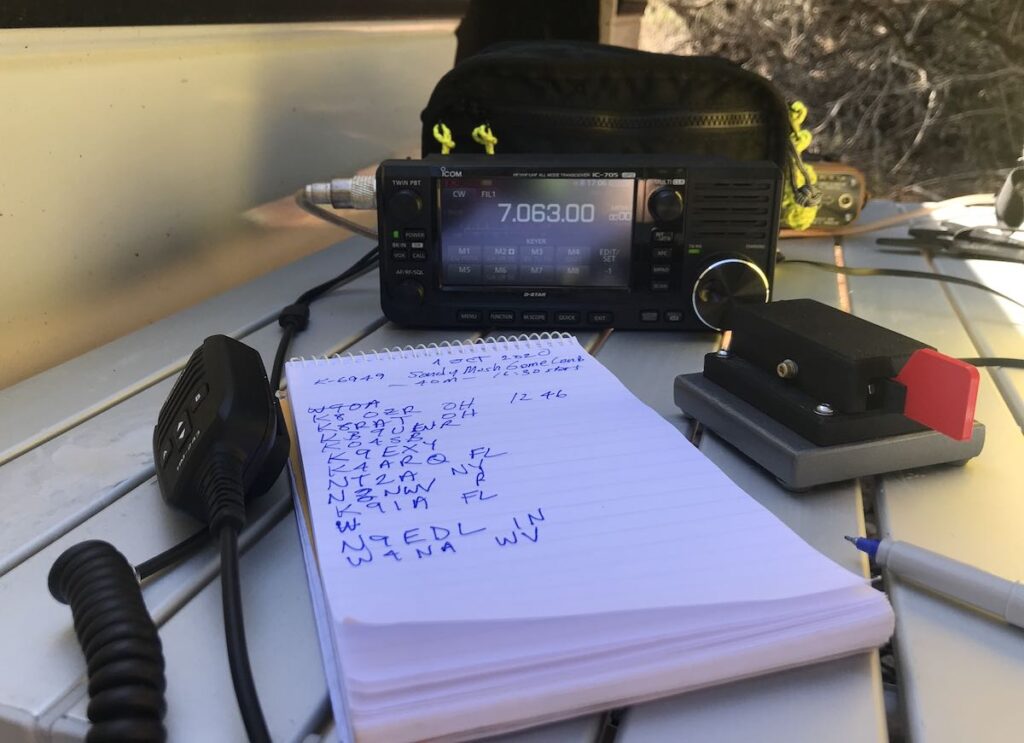 What a blast! I started on 40 meters in CW, but eventually worked both 40 and 20 meters in SSB and CW. I then lowered the antenna, removed the SMA cap on the EFT-MTR coil, and worked 30 meters CW for the remainder of my time. 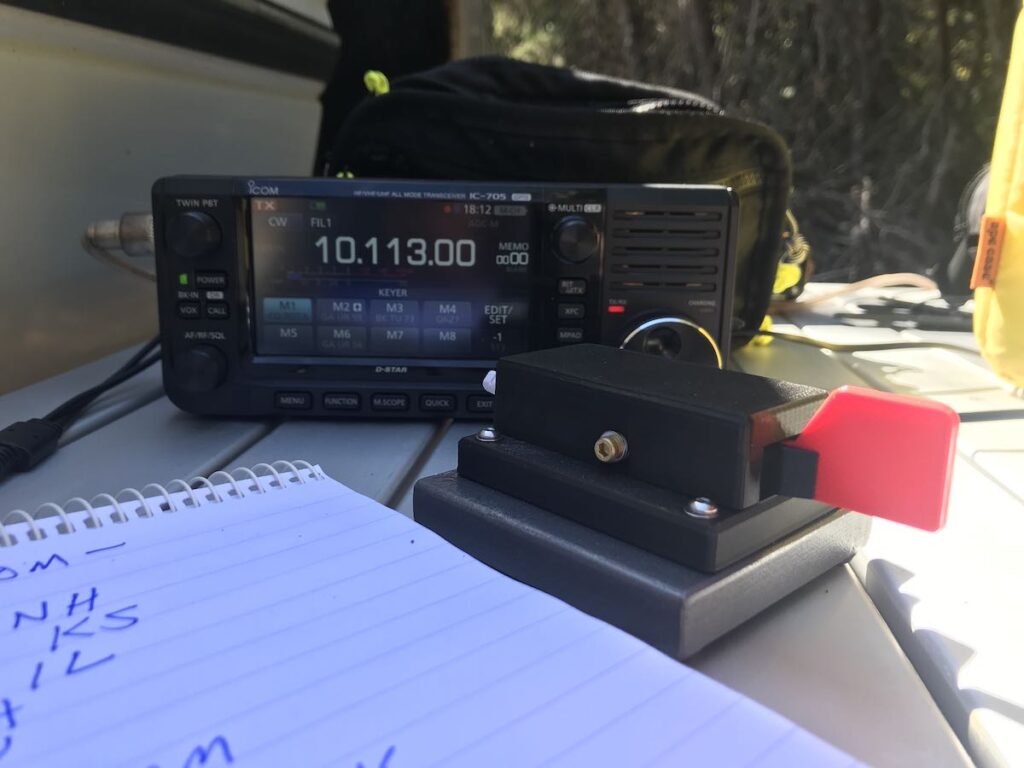 The IC-705 battery pack was still going strong and had about 40% capacity left, but I simply ran out of time as I needed to run an errand in town, so had to shut down the radio and pack up.

I must admit: the IC-705 is doing a much better job managing battery usage than I would have expected. I’m guessing I could have operated for 3 hours or so at 5 watts without needing to recharge the BP-272 1880 mAh Li-ion battery pack.

How does the IC-705’s battery endurance compare with the Elecraft KX2? I’m not sure yet, but I’m guessing the KX2 will have even better longevity as its current drain is less than half that of the IC-705. The KX2 will operate at 10 watts output for about 1 hour 15 minutes with the internal battery pack, before decreasing to 5 watts output. I’ve never tried a battery endurance test with the KX2 at only 5 watts.

Five watts and a wire–wow! 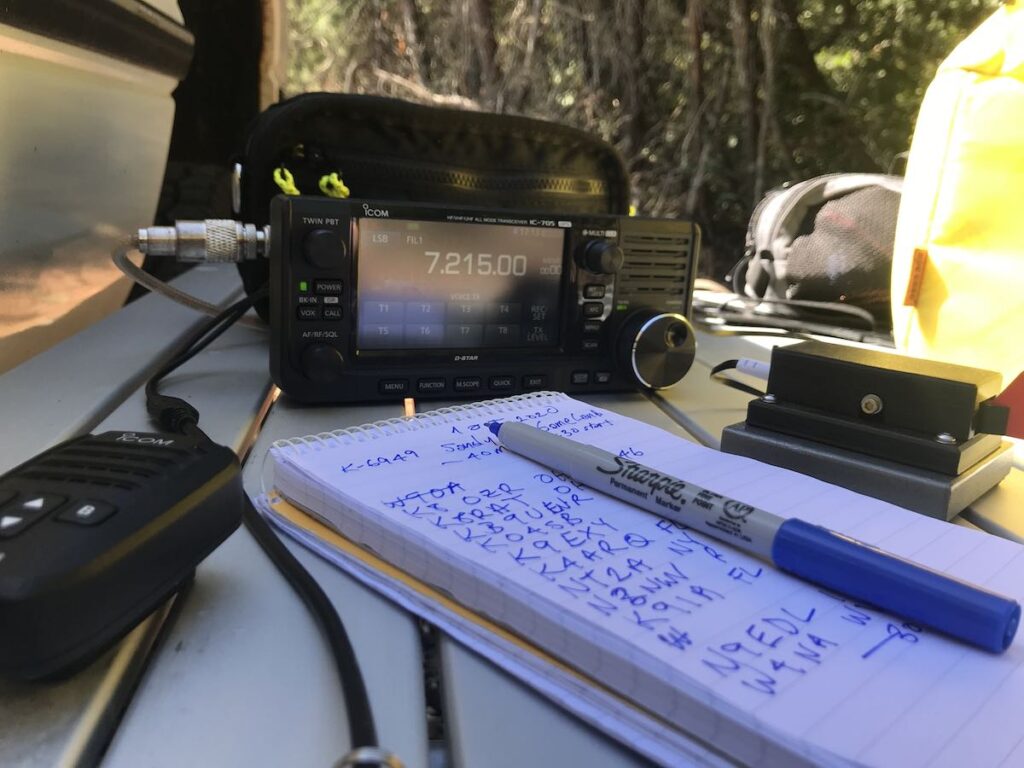 The biggest surprise of the day?

I worked stations from Oregon, and Saskatchewan to the Azores…in single sideband!

Here’s a map of my contacts–red signal paths are SSB, CW in green (click to enlarge):

This was one activation where 5 watts SSB actually snagged more DX than CW. Great fun!

While I’d like to think it was a little IC-705 “mojo” on its first field outing, in truth it had everything to do with the EFT-MTR antenna and what must have been a moment of propagation stability. 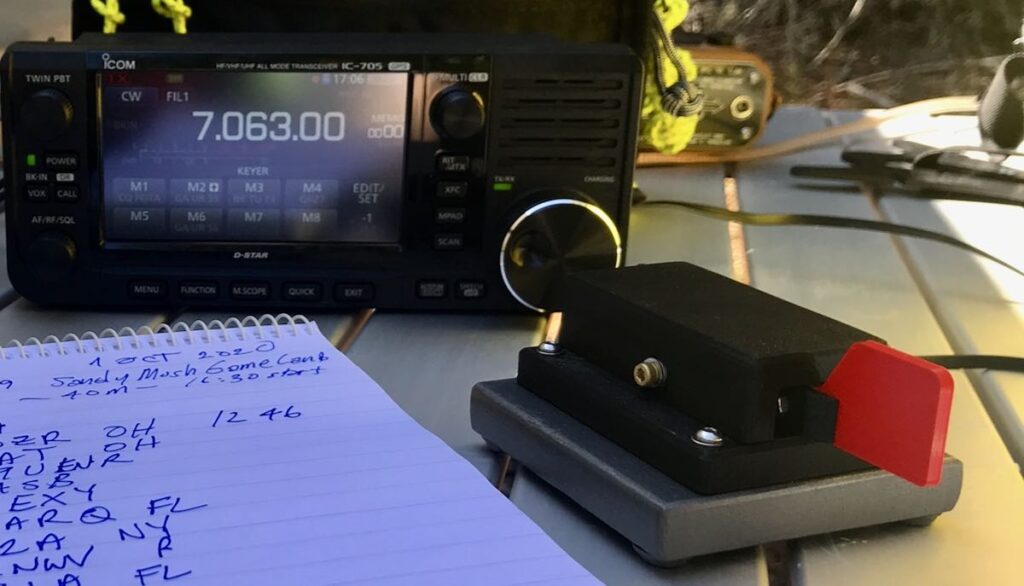 This was also my maiden voyage with the CW Morse Single Lever paddle. CW Morse sent this paddle, along with their double lever paddle and a selection of straight keys, for me to evaluate. If you’ve been considering an affordable, portable single-lever paddle, this is a brilliant one. I really enjoyed using it and the action is very easy to adjust.

I’m already regretting the decision to send it to my buddy Eric (WD8RIF) for a proper evaluation. (Just kidding, Eric! (Maybe.)) He only uses a single lever paddle for his numerous field radio adventures.

Eric will give this single-lever paddle a proper workout and give us a full report. 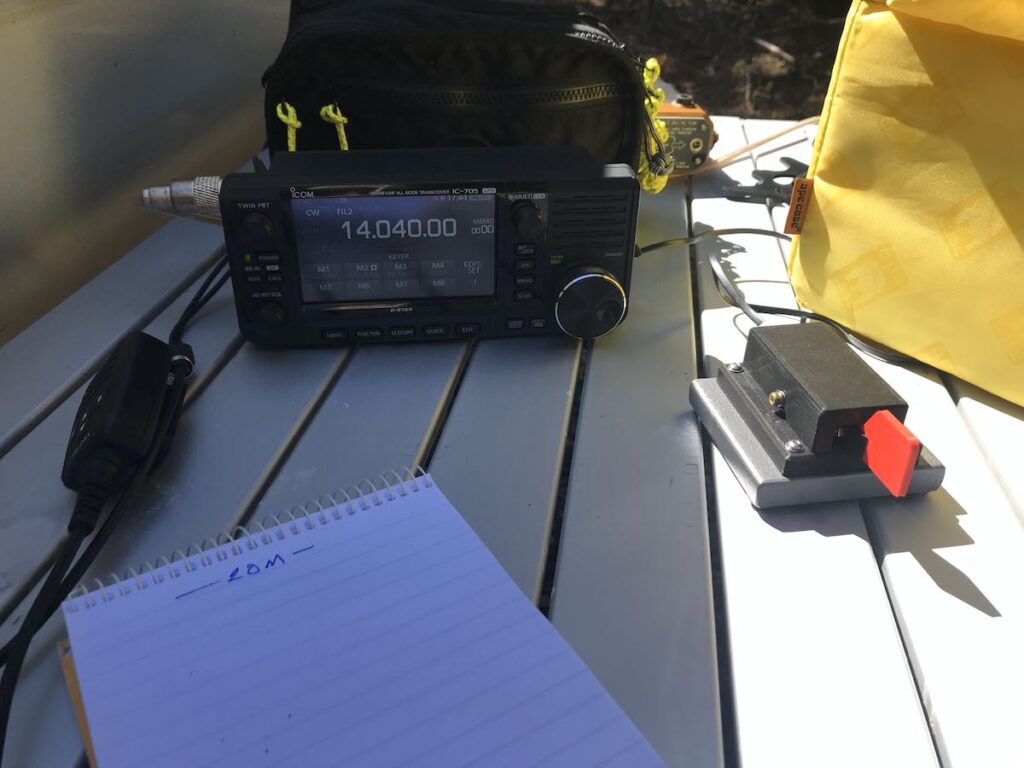 I must admit, I had a lot of fun with the IC-705/EFT-MTR antenna combo.

Of course, I’ll be taking the IC-705 to the field a lot in the coming weeks.

Feel free to comment and ask any questions you may have about the IC-705. I’ll do my best to answer them.