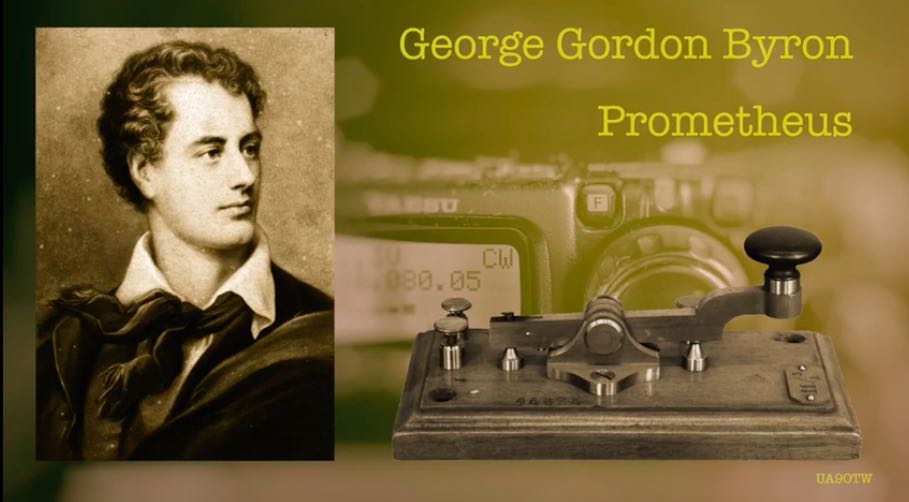 Perhaps it will be interesting to SWLing Post subscribers. A short video for those wishing to improve their skills in Morse code. Poem by George Byron “Prometheus».

The channel also has lessons in studying Morse code and a few videos with my SWL on shortwaves of various radio broadcasting, weather and other service and number stations.

When I practice my CW skills, I do like listening to real content like this instead of randomly-generated characters. One reason is you start to recognize the sound of common words (like “the” “an” “and” “is” etc).

Thank you for sharing this, Val! 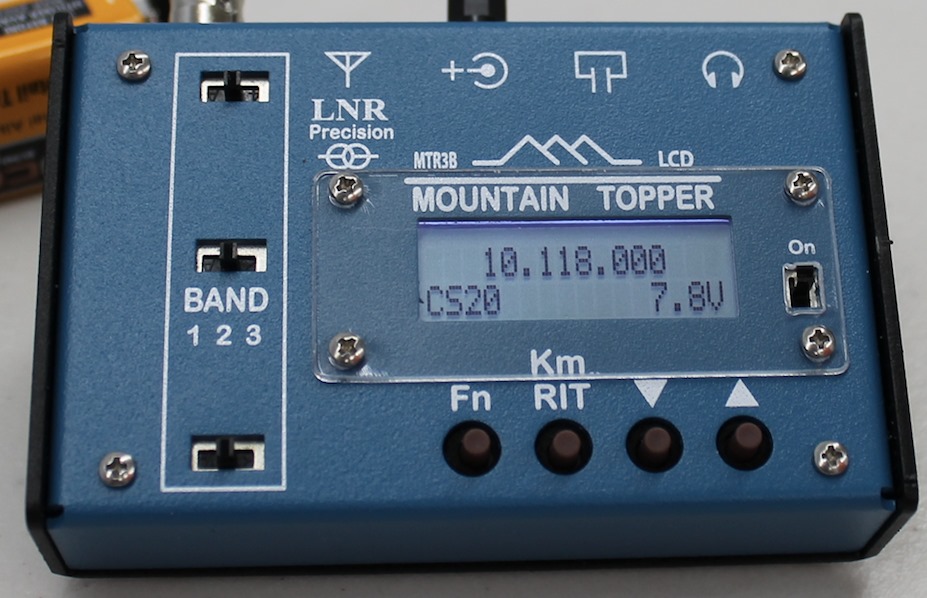 I recently acquired a Mountain Topper MTR-3B from LnR Precision. So far, I really love this amazing little 3 band rig.

I’m looking for a set of portable paddles to put in the activation kit with the MTR-3B.

My go pack will be very compact, so I’d like a set of paddles that could easily slip in the pouch or case with the transceiver. 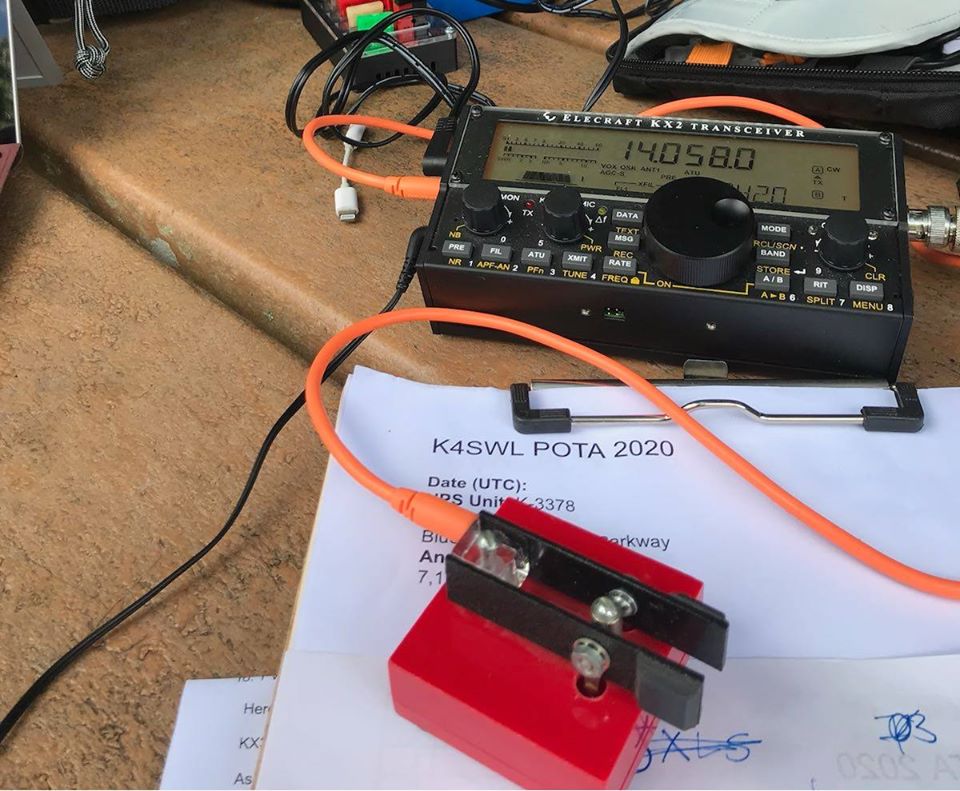 I’m currently using a set of Whiterock paddles with my KX2 (see photo above) and they work well enough, but I’d prefer something perhaps a little more robust and possibly even more portable.

What portable paddles do you use? Any suggestions? Please comment! 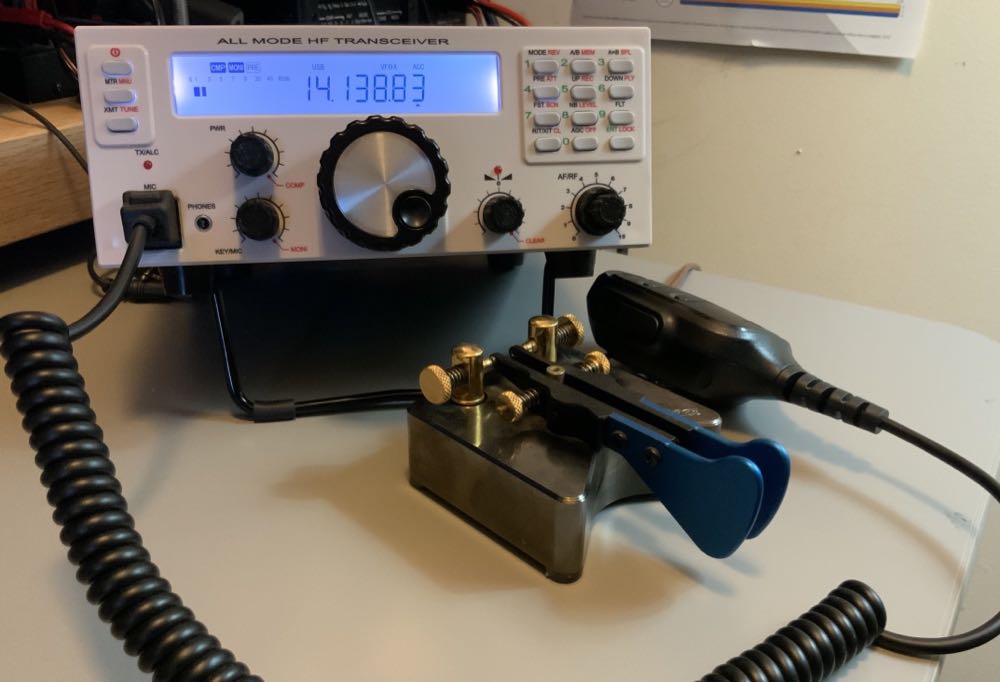 I mentioned in a previous post that I’ve been practicing my CW (Morse Code) skills in an effort to build confidence to do a Parks On The Air (POTA) CW activation.

But how in the world do you practice handling a CW pile-up without actually going on the air–?

Morse Runner’s goal is simple: teach you how to manage a CW pile-up.

When you start a Morse Runner session, the application emulates the sound and atmosphere of the HF bands in CW mode (meaning, a narrower filter setting). It’s very convincing.

Instead of using a key to send a CQ, the Morse Runner interface emulates a contest logging system where a computer generates your CQ and sends the signal report you record for a station.

You simply set a few parameters like your call sign, max CW speed, pitch, and bandwidth, then press the “run” button and call CQ by pressing the F1 key on your keyboard.

Within a few CQ calls, you’ll hear anywhere from one to several stations answer your CQ (depending on your settings). Your job is to then start logging those stations accurately from the pile-up. If you reply with an incorrect call, the other station will repeat their call until you correct it.

Quite often I’ll accurately reply to a weak station and they’ll send “AGN?” and I repeat their report until they copy it.

Morse Runner is so convincing that when I’m in the middle of a big pile-up, I honestly forget I’m communicating with a computer application! I get some of the same excitement and the–let’s be frank–anxiety I would get on the air during a live CW pile-up.

If you select the “LIDs” Band Conditions setting, it’ll crack you up with how accurately it portrays annoying operators who either deliberately or unintentionally try to interfere!

Here’s sample audio from a session this morning:

The screen shot above shows the settings I used for this very tame session with no large pile-ups. If you’re a seasoned CW contester, pump up the speed and the activity level then you’ll feel like you’re on the Heard Island DXpedition!

In short: Morse Runner is giving me the courage to do my first CW park activation. I highly recommend it!

Many thanks to Paul Evans (W4/VP9KF) who writes:

If you’re using a logging program and you need instant look-up of who is in what CW Club, you can use the following page, which I look after:

These files are kept up-to-date on a daily basis. You’ll see that this currently lists memberships of 69 different clubs, including the vast majority of QRP clubs, a surprisingly high number.

One exception: G-QRP [who] told various sites that used their (previously open) membership list to cease using it.

Many thanks to my buddy, Philip (N4HF), for sharing this video that made me chuckle: 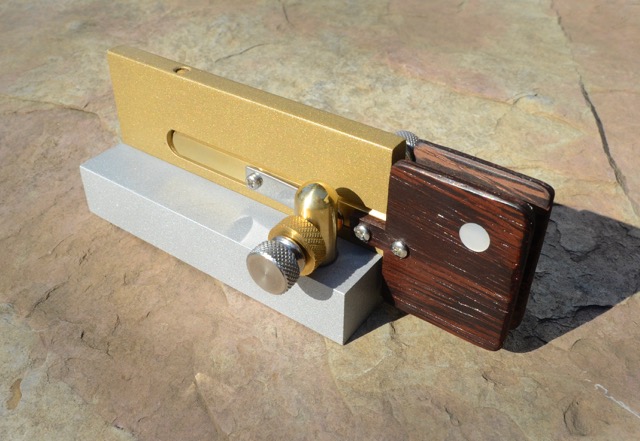 Many of you know W1SFR from the End Fed random wire antennas that have become very popular with QRP ops around the world. The antenna design is not new and has handed down by many hams over many years, but Steve has managed to create quite a following due to his attention to construction and only using the best of materials…all at a very reasonable price.

Now he has applied that same attention to detail and high value to his new “TBP” (Torsion Bar Portable) key. Torsion bar keys use a unique combination of construction and design to provide the CW op with a different experience…one that users are saying very good things about. All of his keys feature a contact system that allows the key lever to make a “softer” contact allowing the very slightest movement when the contact post hits the stainless contact. That not only makes the key feel less “mechanical”, but also makes it much more quiet…a feature these keys are known for.

“ I make each key by hand and top them off with my trademark exotic wood finger pieces with a signature Mother-Of-Pearl dot on each finger piece…no CNC plastic here. The torsion system allows very close contact spacing and effortless CW. The TBP represents a much smaller version of my larger keys, designed to be at home in the field or in the shack.”

You can see all of the keys at W1SFR.com.

Note: Steve also tells me that he lowered his prices for the Christmas season and has decided to extend them for the month of January. Click here to check out his product line. 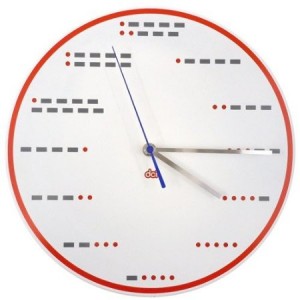 With this clock, from DCI, you can read the time in Morse code.

And I thought my buddy, Mike (K8RAT), was being gastronomically adventurous when he made a homemade single-lever “sideswiper” with a steak knife! Imagine what might happen if the steak knife meets up with this: 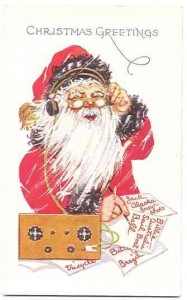 Last night, I captured the pirate radio station Dit Dah Radio on 6,935 kHz (+/-) USB. I published the audio on my shortwave radio blog, The SWLing Post, where I post quite a lot of shortwave radio recordings.

I’m well aware that no law-abiding ham radio operator would ever broadcast as a pirate radio station. So this must be a non-ham, right? (OK, fess up!!!  Who was it???)

You’ll especially like their CW preamble (or, interval signal, I suppose) which they follow with The Capris’ 1960’s hit, Morse Code of Love. Click here to download, or listen in the embedded player below:

Merry Christmas and Happy Holidays to all! 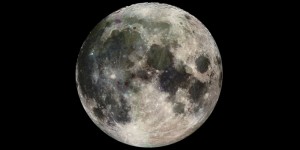 This is the moon as Morse code.

[…]All over the world, ham radio operators and Morse Code enthusiasts beam dot, dash messages straight at the moon, then wait 2.7 seconds for the signal to bounce back. They call these “E.M.E.” transmissions, which stands for “Earth-Moon-Earth” or — more popularly — “moonbouncing.” I suppose it’s fun to smack little beeps against a sleepy rock 239,000 miles away and have those beeps come flying back at you. Plus, it’s easy.

[…]Not so long ago, a Scottish artist, Katie Paterson, turned Beethoven’s Moonlight Sonata into Morse code, (yup, you can do that, too) and bounced it off the moon. Some musical phrases got trapped in moon craters and didn’t come back, which she found so intriguing, she put the ricocheted, fragmented Moonlight Sonata on a player piano and you can now see her MoonBounced, Morse-Coded piece being not performed by anyone, the keys going up and down on their own, on YouTube.

I’m a huge fan of Krulwich’s witty science articles and am thoroughly impressed that he brings CW into the popular press. Nevermind his tongue-in-cheek!

PS: As I wrote Robert, I think Artemis would love to hear the “sacred language.”