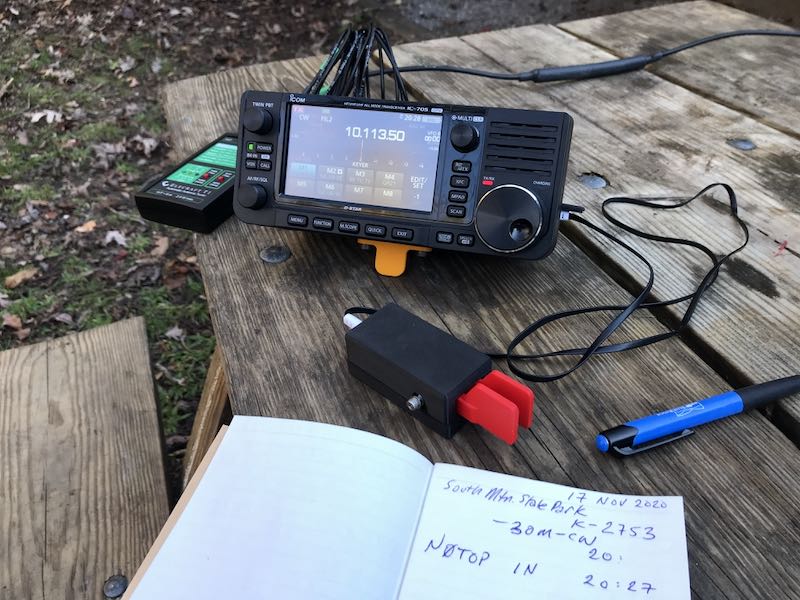 On Tuesday (Nov 17, 2020), I decided to activate South Mountains State Park (K-2753) for the Parks On The Air (POTA) program. As with my activation at Lake James the day before, it was impromptu. Basically, the weather was beautiful, so I couldn’t resist.

In fact, the weather was so nice, on my way to South Mountains I passed by Bakers Mountain County Park and hiked their full trail including the summit. While on that hike, I ran into Kenneth (W4KAC) who had just activated Bakers Mountain for Summits On The Air (SOTA). This was a bit of serendipity because I, too, plan to activate Baker’s Mountain for SOTA and Kenneth provided some great details for finding the summit (which is not actually on the park grounds).  It was great running into a fellow QRPer and talking shop, too!  I hope to meet Kenneth again in the field. 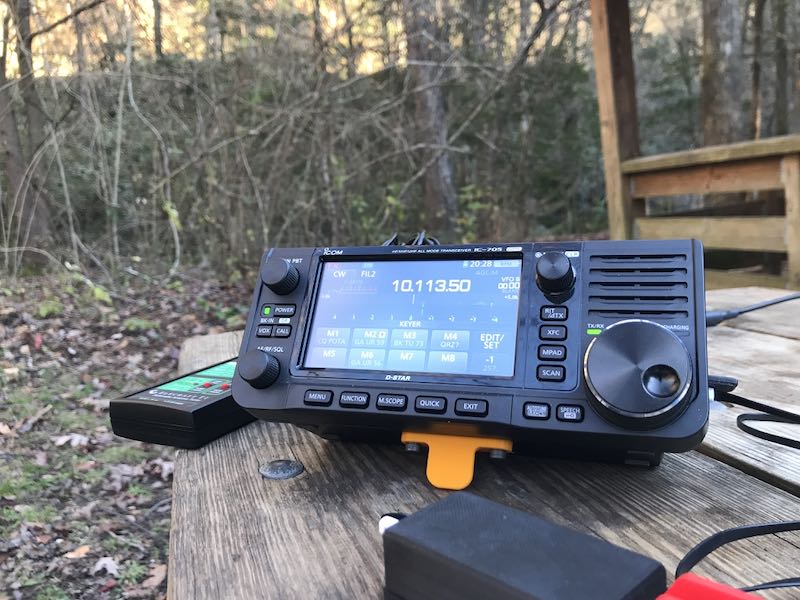 I arrived at South Mountains State Park mid-afternoon and set up near one of their large covered picnic shelters.

Although I’ve activated South Mountains State Game Land numerous times in the past, I’ve never activated the actual park. The last time I popped by the park, there was already another ham there in the middle of an activation, so I moved to the adjoining game land that day.

South Mountains State Park is a very popular park–indeed, it’s currently the second most activated park in North Carolina.  Although I didn’t realize it at the time because I had no internet access, there was actually another operator somewhere at the park on the air at the same time I was.

Once again, I set up the Chameleon CHA MPAS Lite vertical antenna for this quick activation. 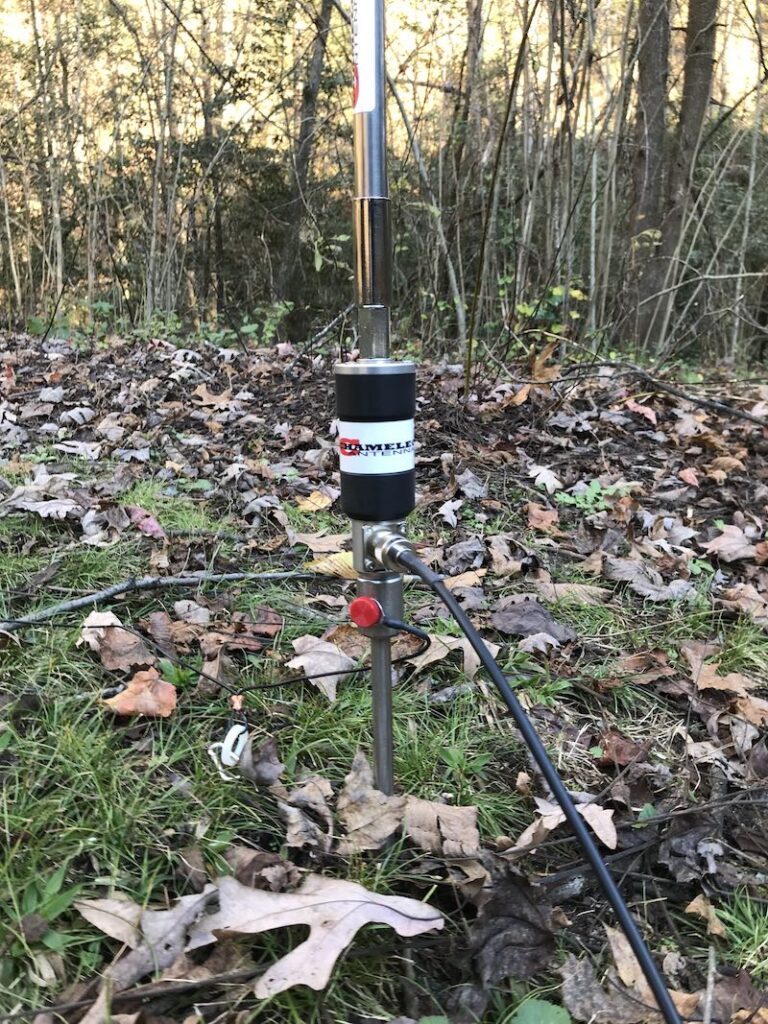 Besides being such a quick and easy antenna to deploy, I love how stealthy it is, essentially disappearing against a background of trees. 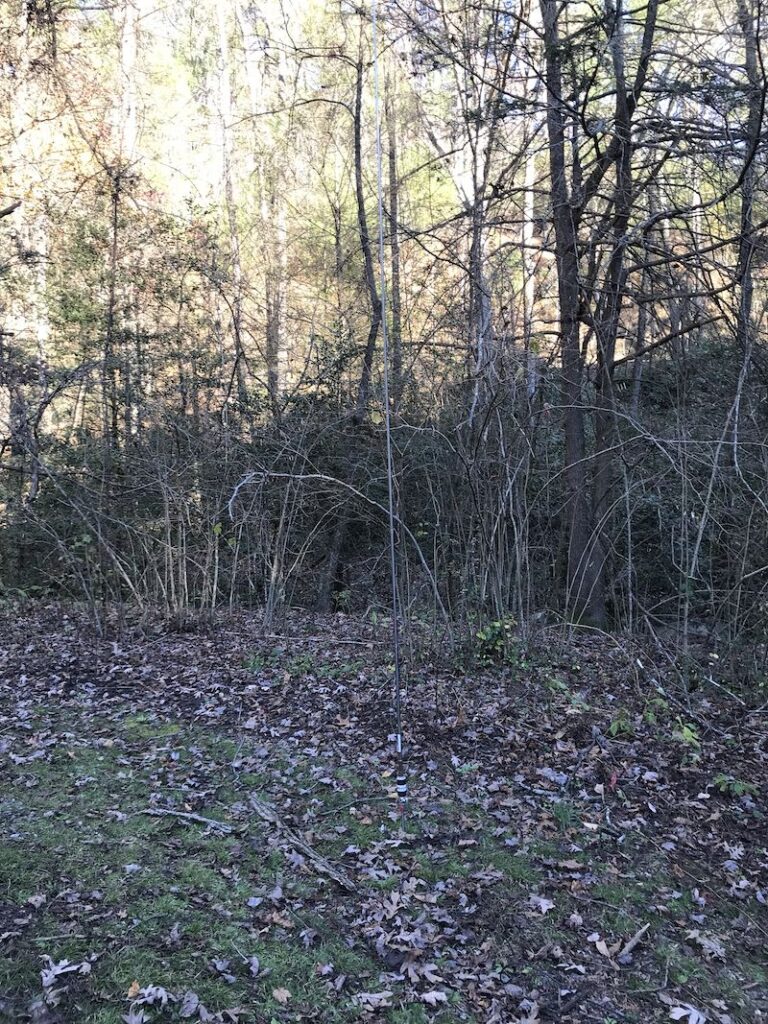 As you might imagine, activating a park while someone else is also activating it is not ideal. At the time, I couldn’t figure out why contacts were coming in so slowly, but no doubt many hunters probably thought they’d already worked me because they worked the other activator. 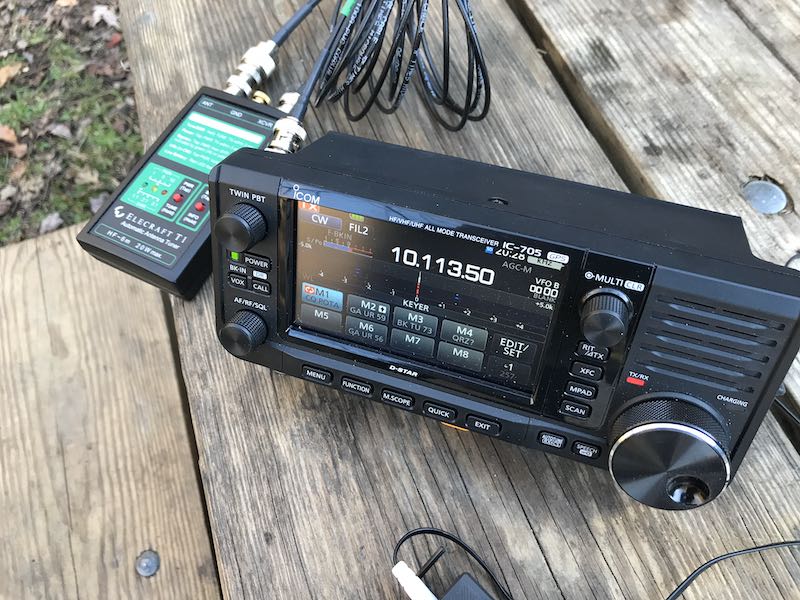 In the end, though, my biggest problem at South Mountains was the fact my battery died in the Elecraft T1 ATU after finding a match on the 20 meter band. A 9 volt battery should last months in the T1, but the battery I put in it several weeks ago had already been used in another device for a few months. I had meant to replace it with a fresh cell. I actually packed a new 9V battery in my main radio pack, but I didn’t have it with me on this trip because both South Mountains and Lake James were unplanned activations.

I spent a good half an hour on the 20 and 30 meter bands where I had a decent match, but only logged three or four hunters. Conditions were not ideal on the higher bands.

I really needed to move down to the 40 meter band knowing it would be more productive, but I had no way to find a match for the IC-705. (Lesson learned: I’ll never again leave home without my Emtech ZM-2 as a backup!).

Fortunately, I remembered I had the Elecraft KX1 field kit. The KX1 now permanently lives in my car so I know I always have a complete radio kit for impromptu field activations. 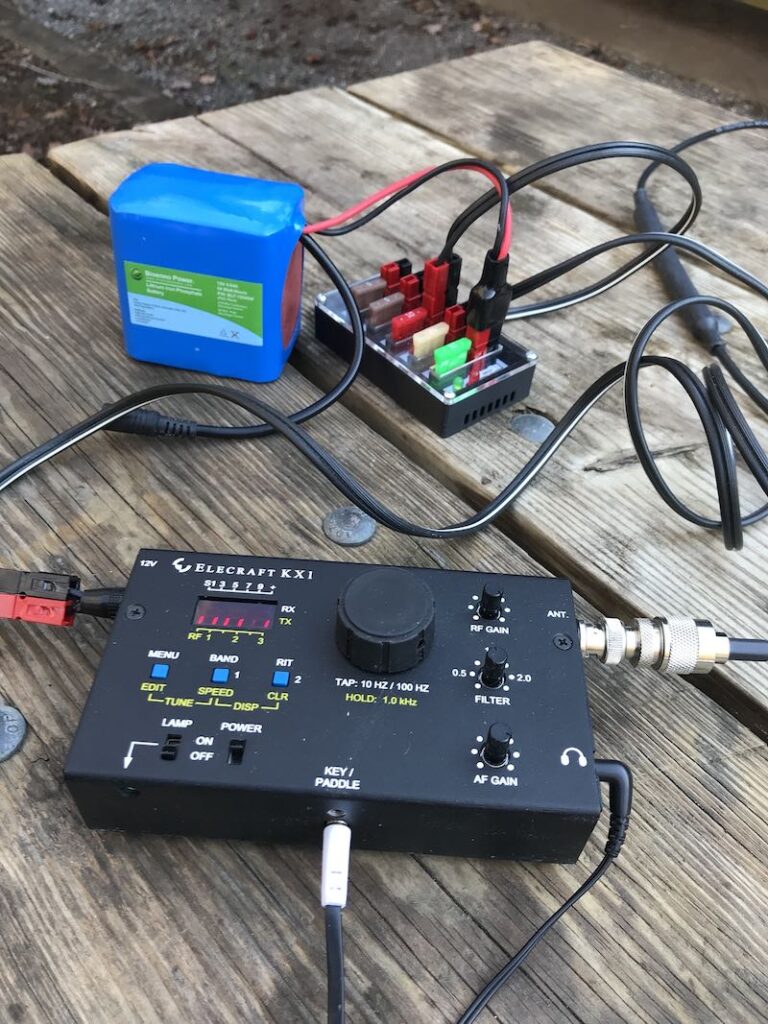 The KX1 has a built in ATU, but it’s not as robust and versatile as the T1 or the internal ATUs in the KX2 or KX3.

After tinkering with the CHA MPAS Lite counterpoise for ten minutes, I finally found a length that, if half suspended, allowed the KX1’s internal tuner to achieve a 1.9:1 match. Good enough! 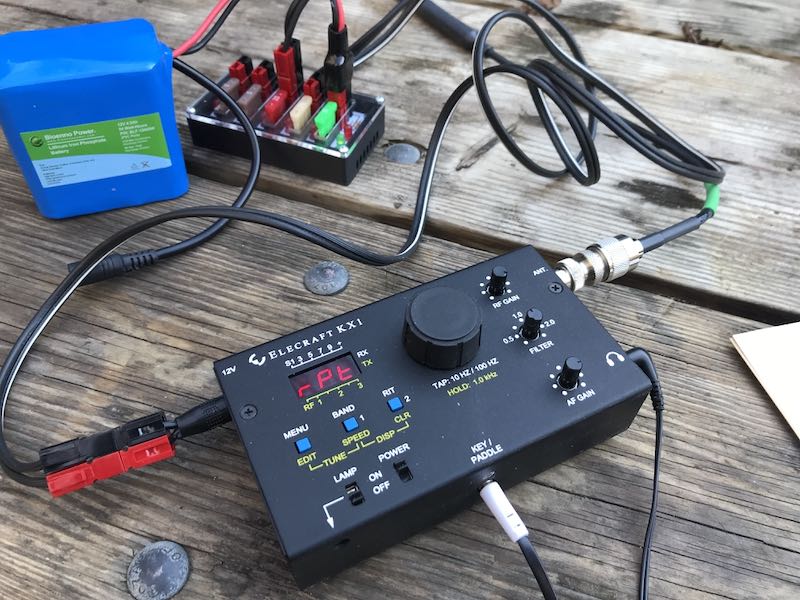 I started calling CQ on 40 meters and within a few minutes, I logged a total of 12 contacts.

The KX1 saved my bacon that Tuesday! 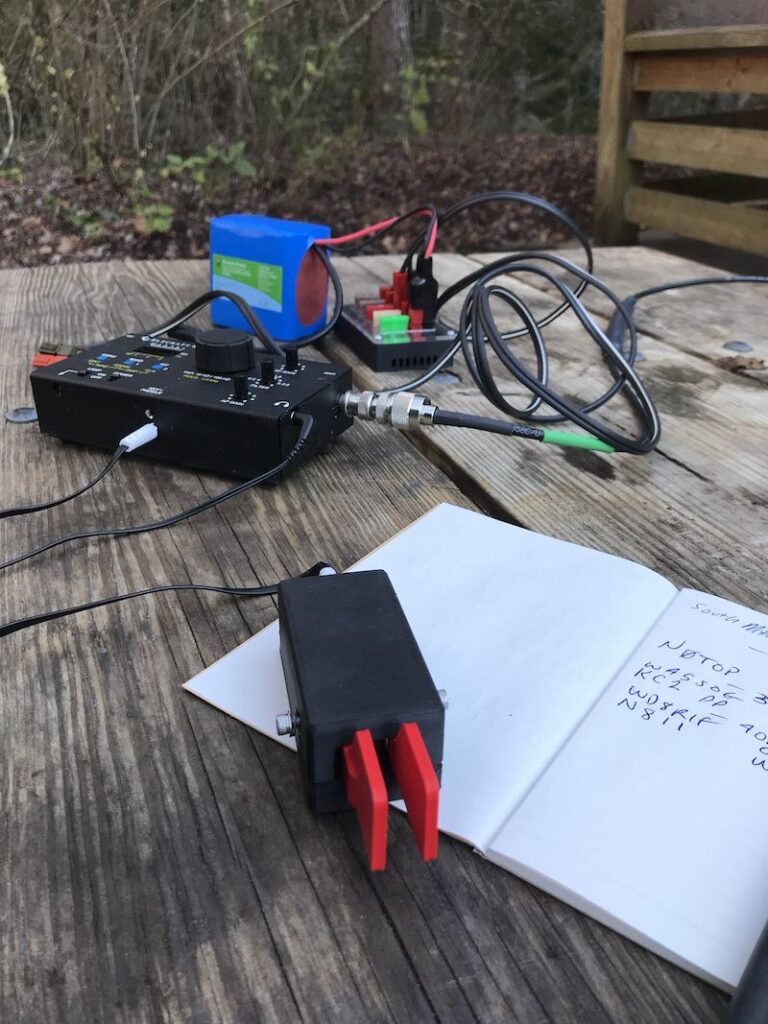 All in all, I really enjoyed the time at South Mountains State Park. It was beautiful weather and I had an idea spot to set up and operate. I’ll certainly come back here in the future.

I’ve also decided that I’m going to start packing a resonant antenna option in the car with my KX1 field kit. It’s only this year that I started using multi-band and random wire antennas that require an ATU; they are mighty convenient indeed, but it’s always nice to have a resonant option on hand as well.