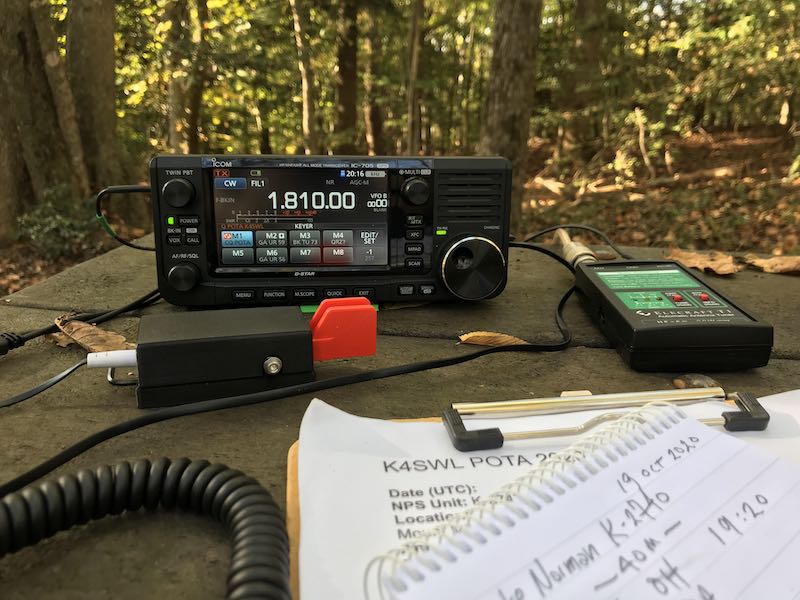 On Monday (October 19, 2020) I received an inquiry from Dale (KI5ARH) only an hour or so before packing up my radio gear to activate Lake Norman State Park (K-2740).

Dale is interested in using his recently acquired Icom IC-705 to get involved with Parks On The Air (POTA) and play radio in the field.

What’s in my field kit

Dale was curious about all of the components of the field kit I use with the IC-705, so I made this video:

Since I had already set up my phone to record the video above, I decided to make a couple more.

I thought there might be some value in making real-time videos showing what it’s like operating CW and SSB during a POTA activation.  The videos have no edits and haven’t been trimmed.  It’s as if the viewer were there at the activation sitting next to me at the picnic table.

Operating CW with the IC-705

After setting up my station, I first started on the 40M band in CW. I meant to start the camera rolling during tune-up, but forgot to hit record. The video begins after I’d made a few CW contacts, but shows what it’s like changing bands and relying on the Reverse Beacon Network (RBN) to pick me up then the POTA website to auto spot me.

Note: to be automatically spotted by the RBN, you must schedule your activation via the POTA website in advance, or have been already spotted by yourself or someone else, so the system will know to look for you.

My video cut off abruptly due to a low battery message. I had to give my iPhone a quick power charge to make the next video.

Operating SSB with the IC-705

After operating CW for a while, I plugged in the hand mic that ships with the IC-705 for a little SSB action. My main goal with this video was to show how I call CQ and use the voice keyer memories in order to manage the field “work flow” process.  I also speak to how important it is to either self-spot or have a friend spot you to the POTA network while operating phone.

I spent so much time setting up and running the camera, I wasn’t actually on the air for very long, but I easily managed to achieve a valid activation and had a lot of fun in the process.

I’m not a pro “YouTuber” as I say in one of my videos. I much prefer blogging my experiences rather than “vlogging,” I suppose.

Still, I think I’ll do a few more “real-time” videos of POTA activations and speak to the various techniques I use to activate parks. Since these videos aren’t edited for time, they may not appeal to the seasoned POTA activator or QRPer–that’s okay, though. My goal is primarily to assist first-time POTA activators.

Have you been activating Parks or Summits lately?  Do you have any advice or suggestions I failed to mention? Or do you have suggestions for future topics? Please comment!