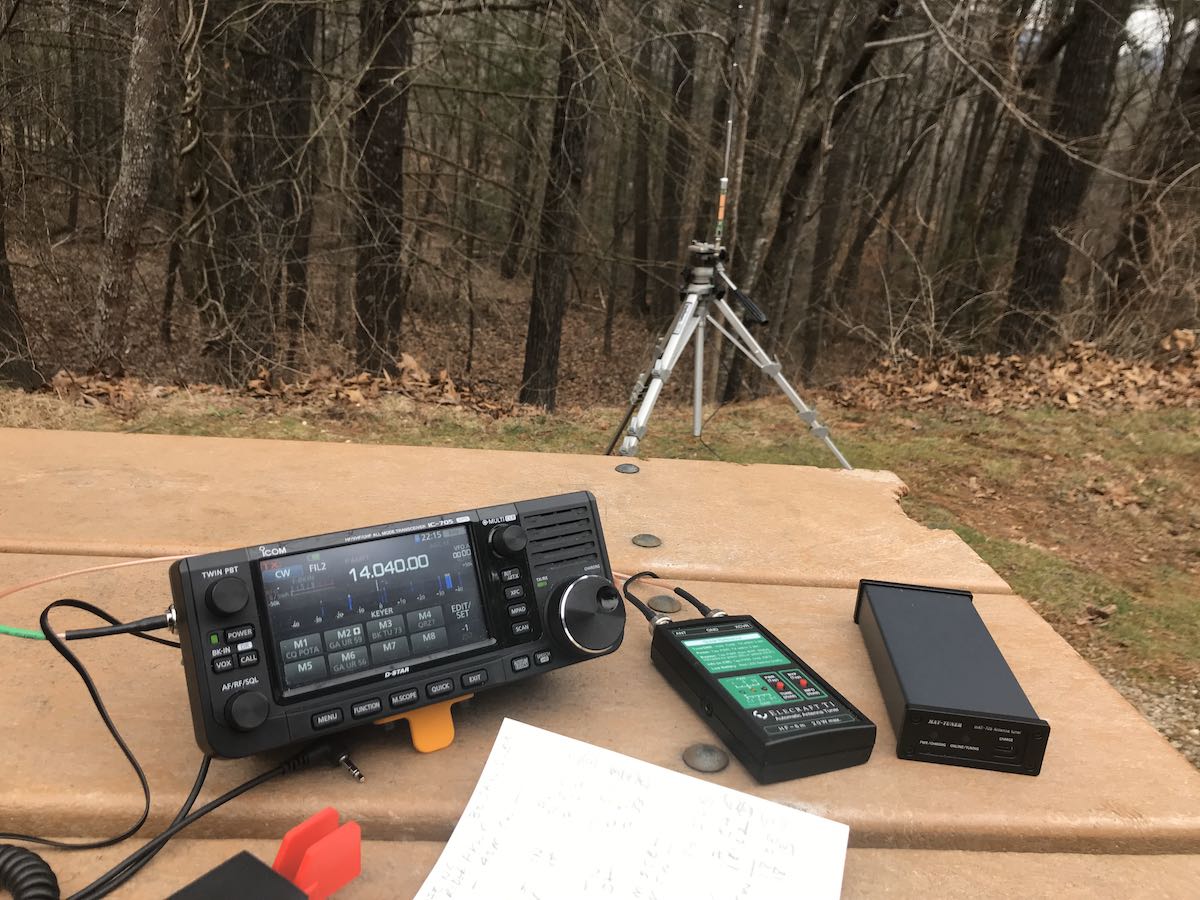 I think I’ve said before that I don’t like doing things the easy way. At least, I’m coming to that conclusion.

This Saturday (Jan 30, 2021), I had a small window of opportunity to perform a Parks On The Air (POTA) activation.  My park options were limited because I needed to stay near my home and a store where I was scheduled to do a curbside pickup.

The only viable option–since time was a factor–was my reliable quick hit park.

I plotted a quick trip to the Blue Ridge Parkway Folk Art Center which is centrally-located and, this time of year, there are few visitors.

But what radio take? It had been a couple of weeks since I used the IC-705 in the field, so I decided to take it and rely only on its supplied BP-272 battery pack.

My buddy Mike (K8RAT) had warned me only a few minutes before my departure that propagation was pretty much in the dumps. I’d also read numerous posts from QRPers trying to participate in the Winter Field Day event and finding conditions quite challenging.

Saturday was the sort of day that I should’ve deployed a resonant wire antenna and made the most of my meager five watts thus collect my required 10 contacts in short order.

And that’s exactly what I didn’t do.

You see, a really bad idea popped into my head that morning: I had a hankering to pair the IC-705 with my Elecraft AX1 super compact vertical antenna.

This made absolutely no sense. 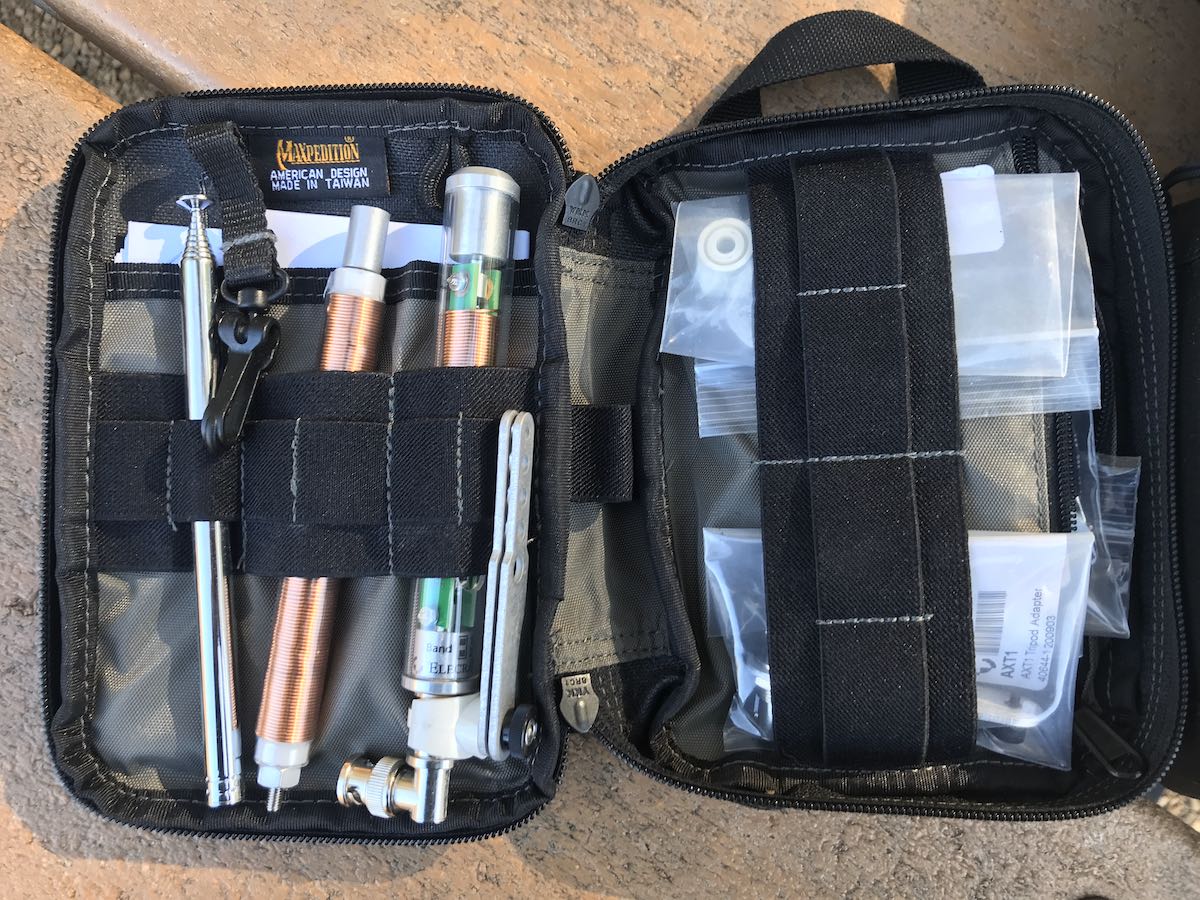 I tried to get the idea out of my head, but the idea won. I suppose, at the end of the day, I’m not about taking the easy path (and I’m obviously a glutton for punishment).

I was also very curious if the mAT-705 Plus external ATU could tune the AX1 on 40 meters. More on that later… 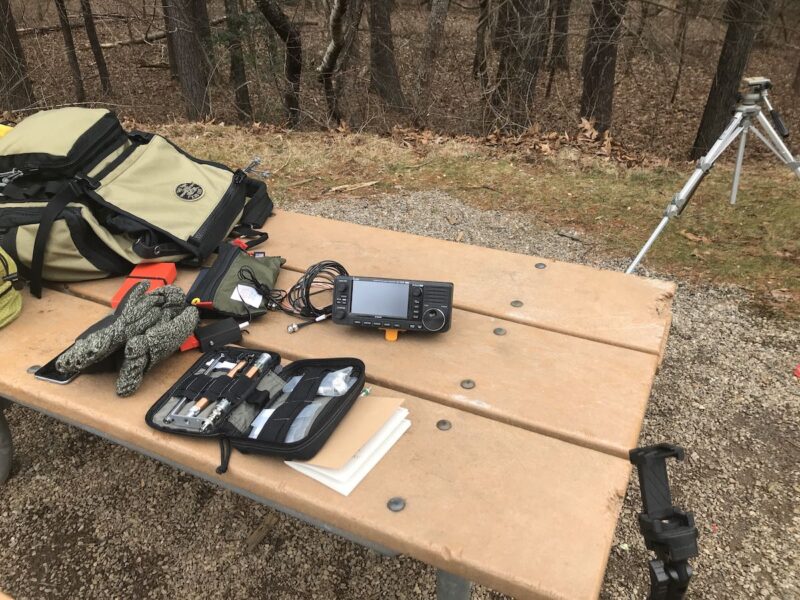 I arrived on site a few minutes before noon. Setup was fast–that’s the big positive about using the AX1.

Normally, I deploy the AX1 antenna with my KX2 or KX3 and simply attach it to the BNC connector on the side of the transceiver. The AX1 Bipod gives the antenna acceptable stability during operation.

The IC-705 also has a side-mounted BNC connector, but it’s much higher than that of the KX3 or KX2. I’m not entirely sure I could manipulate the Bipod legs to support the antenna without modification.

That and the AX1 needs an ATU to match 40 meters (where I planned to spend most of the activation). Since the IC-705 doesn’t have an internal ATU, mounting it to the side of the transceiver really wasn’t an option. 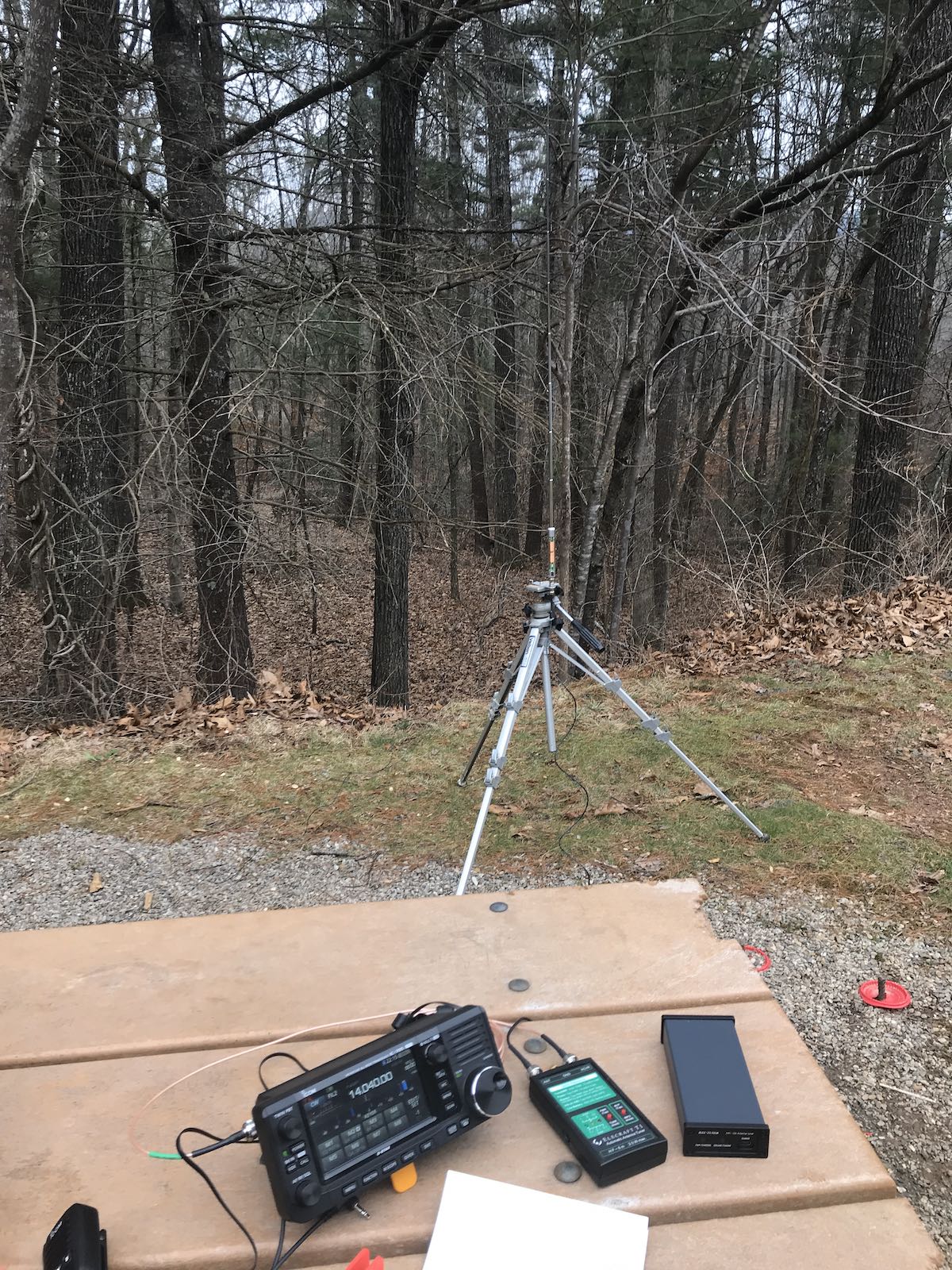 I employed my AX1 tripod mount for the first time. On the way out the door, I grabbed an old (heavy) tripod my father-in-law gave me some time ago and knew it would easily accommodate the super lightweight AX1.

I first tried using the Mat-Tuner mAT-705 Plus ATU to tune the AX1 on 40 meters.

Instead of grabbing the Chameleon MPAS Lite or 2.0 from the car, I decided instead to see if the Elecraft T1 ATU could tune 40 meters. 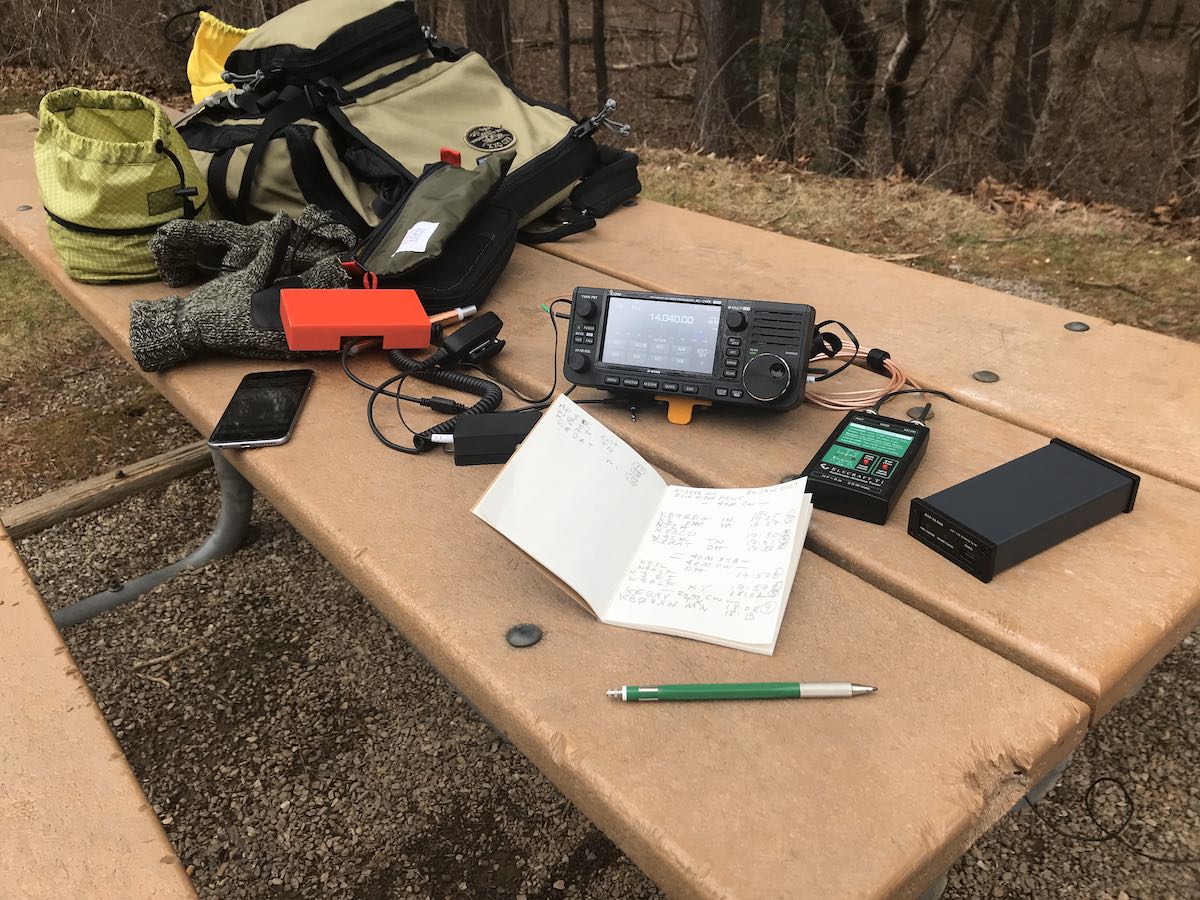 In short, I logged my ten contacts to have a valid activation, but it was slow-going. All but two of my contacts were on 40 meters CW. The last two logged were on 20 meters CW. 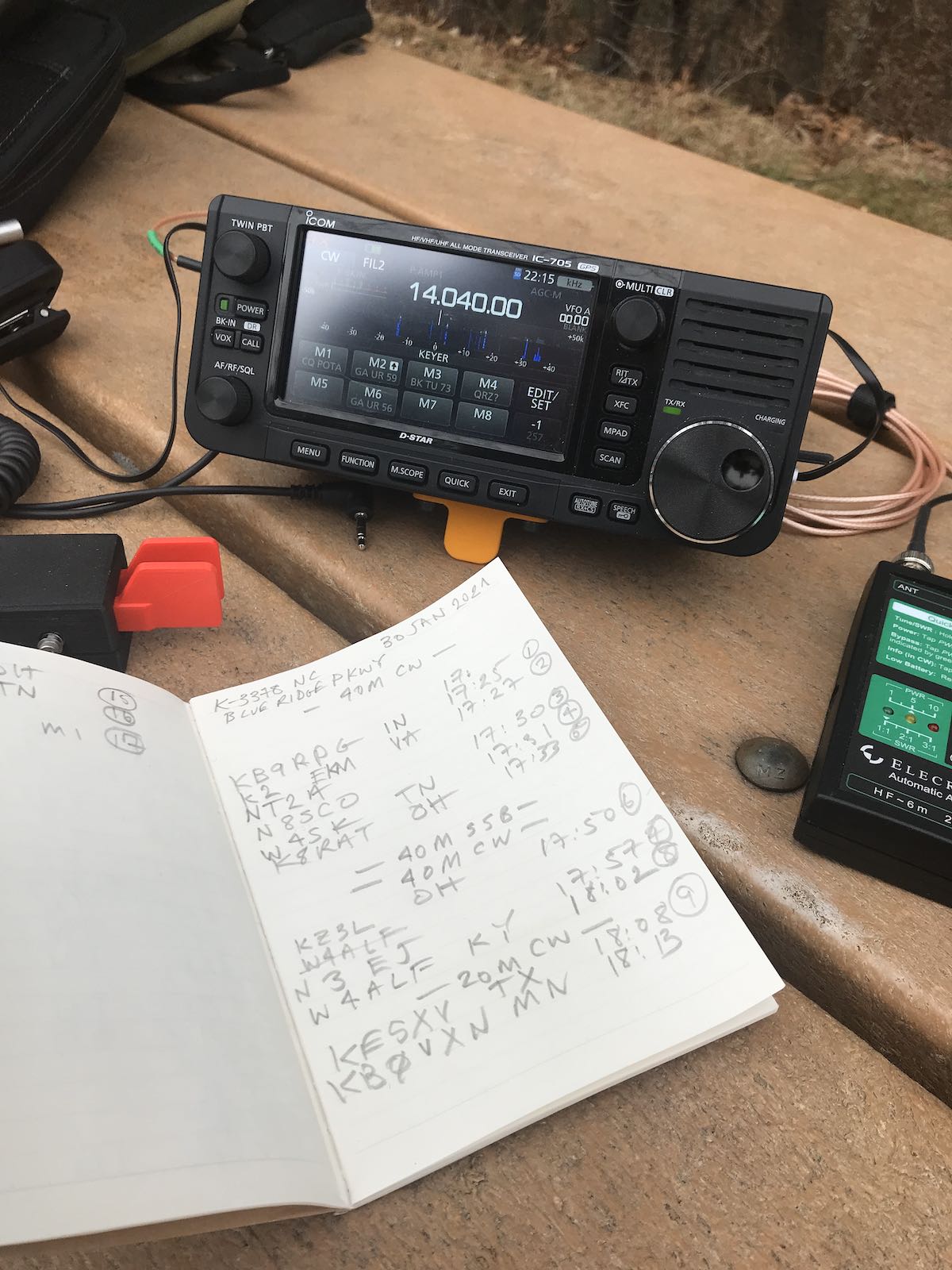 It was a challenge, but I really enjoyed it! And, frankly, considering the propagation, 5 watts of power only using the IC-705 battery pack, and the inherent inefficiencies using a loaded compact vertical antenna and ATU? I was impressed.

Here’s a QSOmap of my 10 contacts: 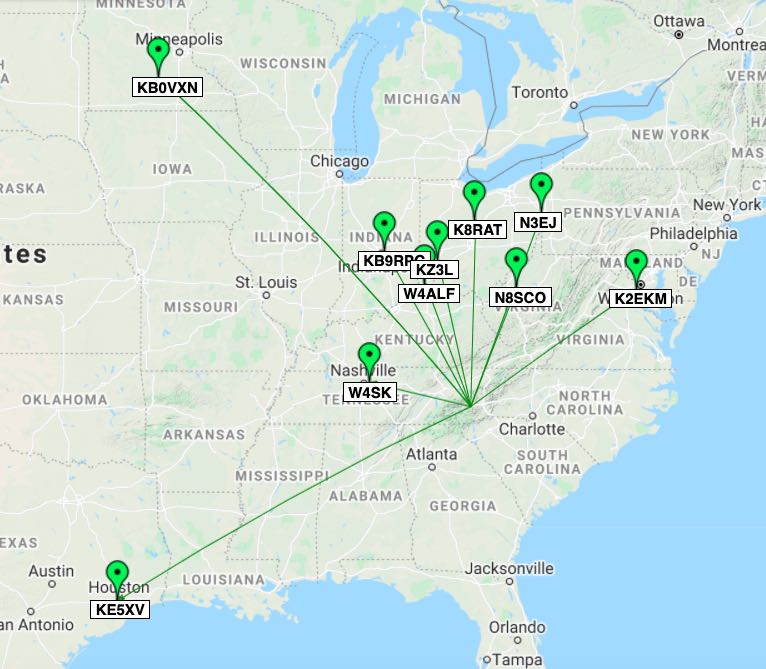 I bet my effective radiated power was closer to 2-3 watts.

Typically, the AX1 antenna acts almost like an NVIS antenna on 40 meters, but Saturday it favored Mid-Atlantic and the states of IN, OH, and PA. Normally, I would expect more of a showing from the states surrounding North Carolina.

My last two contacts on 20 meters were with KE5XV in Texas and KB0VXN in Minnesota. Not a bad hop!

It took longer to collect my ten contacts than I had hoped and I ran nearly 25 minutes late to my curbside appointment. I’m a punctual guy, but there was no way I was leaving without my ten! 🙂

Here’s a video of the entire activation. Hint: it’s the perfect remedy for insomnia:

Next time I try to pair the IC-705 with the AX1 antenna, I think I’ll try adding a couple more ground radials and see if the mAT-705 Plus can more easily find a match.

One thing I know for sure: the T1 is a brilliant little ATU. While the mAT-705 Plus was never designed to do this sort of match, it’s comforting to know the T1 can.

I’m very curious if anyone else has paired the Elecraft AX1 with the Icom IC-705 or other QRP transceivers. If so, what was your experience? Please comment!

One thought on “POTA Field Report: Pairing the Icom IC-705 with the Elecraft AX1 pocket antenna”