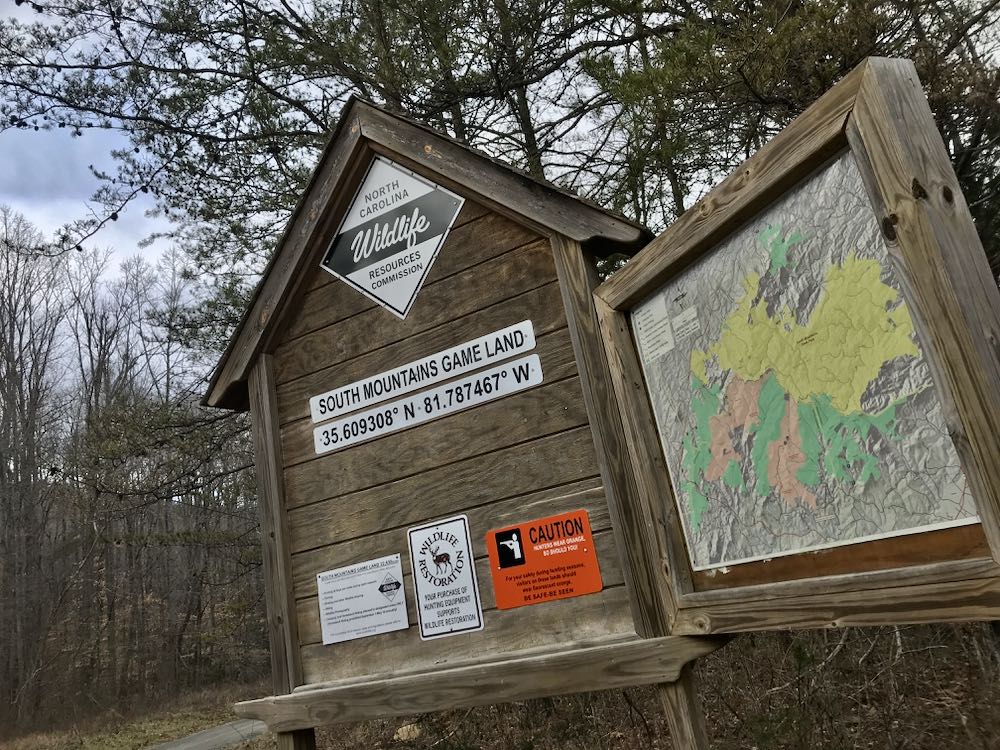 Last week, I squeezed in two activations on the afternoon of February 17, 2021 to test out the MFJ-1984LP end fed half wave antenna that MFJ sent me to evaluate.

The first park was Lake James State Park where I paired the MFJ-1984LP with my Icom IC-705 (click here to read the report and watch the video). The second was South Mountains Game Land where I paired it with the Elecraft KX2.

In both instances, I did not use an ATU because the EFHW is resonant on the bands where I operated. I bypassed the internal ATU in my KX2 and, of course, the IC-705 has no ATU.

I’ve got a very busy few days ahead including a presentation tomorrow at the Virtual Winter SWL Fest (the topic being QRP transceivers). In lieu of writing a full field report, I’ll simply share the (partial) video I made at the activation.

I’ll admit it, I was not on my “A Game” at that activation. Not only did I forgot to press the start button on the camera, but I also struggled copying CW more than I usually do. I had a lot on my mind that afternoon, though, and really felt pressed for time.

I don’t mind sharing this experience, however, because we all have days like these. 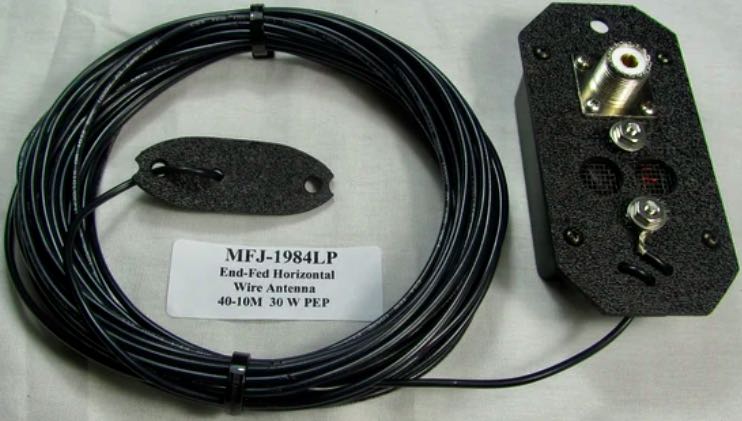 I’ve been a ham radio operator since 1997, but until 2016, I had never purchased a pre-made portable antenna–I had always built my own.

During the 2016 NPOTA (National Parks On The Air) program, however, I purchased the EFT Trail-Friendly end fed 40, 20, and 10 meter resonant antenna and it quickly became my favorite field antenna. I found that it was simply built better than I could have built a similar antenna at home.

Pre-made antennas, though, come at a cost. Most time-tested, trail-friendly, portable antennas will typically set you back $90 US or more. You can make similar antennas much cheaper especially if you already have some of the parts (wire, toroids, RF ports, enclosures, etc).

Recently, while browsing the MFJ catalog, I stumbled upon the MFJ-1984LP End Fed Half Wave wire antenna designed for for field use and retailing for only $49.95 US.

That price point is very attractive because I believe if I built this antenna myself and needed to buy new parts, I might easily sink $20-25 in it.

Most MFJ products are manufactured in the USA and the company has an incredibly extensive and diverse selection of items in their catalog. Why I had forgotten they also sell antennas is a mystery to me.

MFJ is well-known for offering products that are basic,  affordable, and accessible (they’re available directly from the manufacturer and through most major radio retailers across the globe). I wouldn’t expect their antennas to be engineered like Chameleon Antenna, for example, but I would expect them to work well and get the job done.

I know the folks at MFJ and (in the spirit of full disclosure) they even sponsor QRPer.com, so I reached out to them and asked if I could evaluate their MFF-1984LP which is their most affordable field wire antenna.  They kindly sent one my way and I took it to the field last week.

I should add here that MFJ welcomes critical reviews, which is one of the reasons I asked them to be a sponsor. That and, well before they knew me, I was an anonymous customer and they repaired my MFJ roller inductor tuner for free a good two or three years after the warranty expired. My experience with MFJ has only been positive. 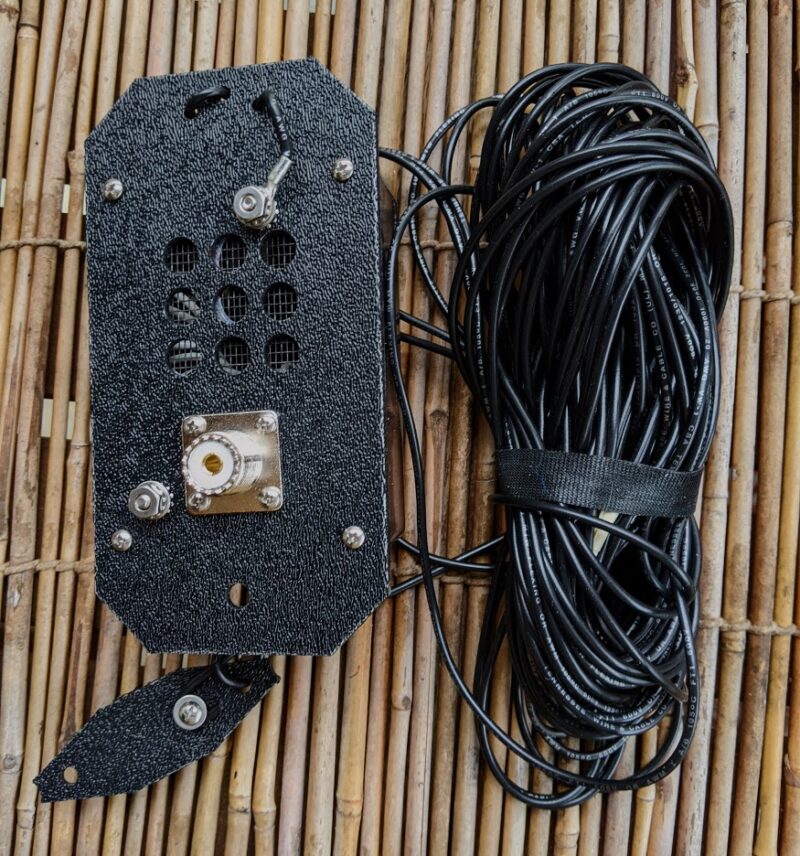 The antenna looks exactly like the product photo in their catalog (see above).

For a field antenna, the coil enclosure is a little on the large side (especially compared with my EFT Trail-Friendly), but it’s still very backpack-able. Knowing MFJ, they kept costs at bay by using one of their standard enclosure boxes for this antenna.

The enclosure also has an open grill to allow the coil to dissipate heat (see above). I found that a bit surprising since the core is so large inside, but I assume some heat must be generated if you’re running 50% duty at a full 30 watts (the maximum rated power). The matching network impedance ratio is 49:1, so there will be loss and heat. 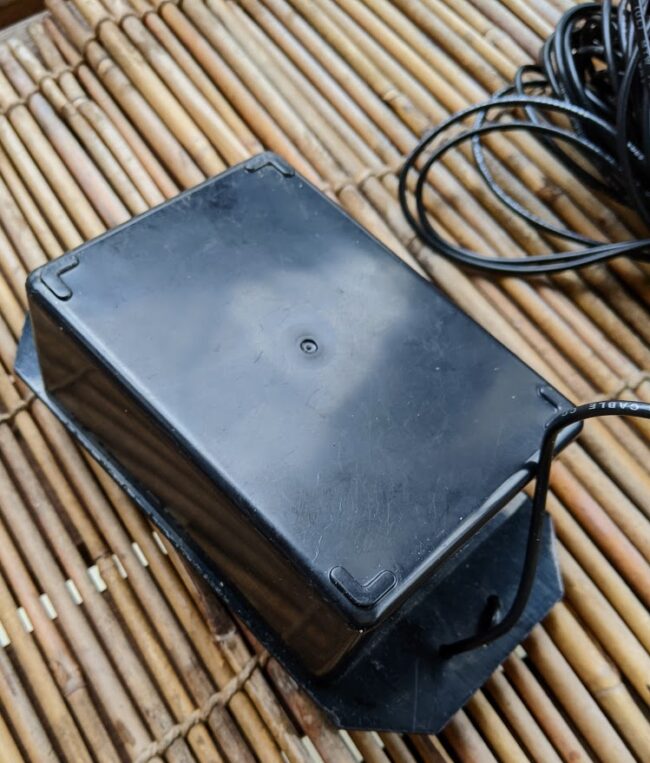 The 66 foot radiator wire has a dark jacket that glides nicely over tree limbs and doesn’t encourage tangling when unwinding. 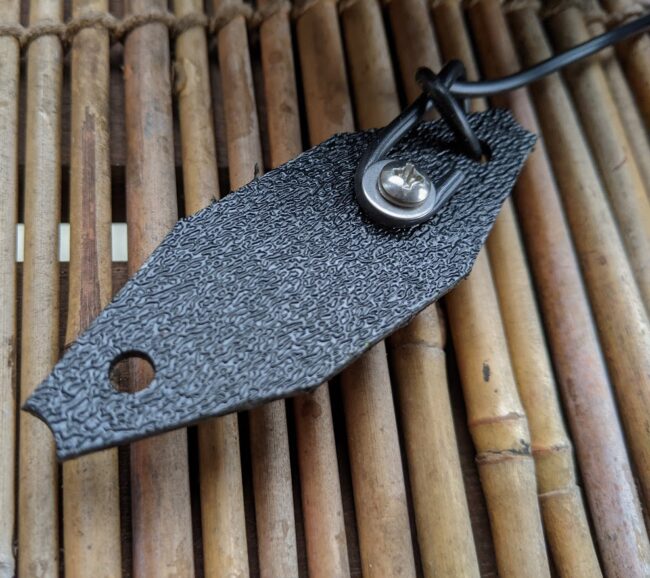 The end insulator is made of a thin plastic/composite material that is lightweight and shaped so that it won’t snag on tree limbs. 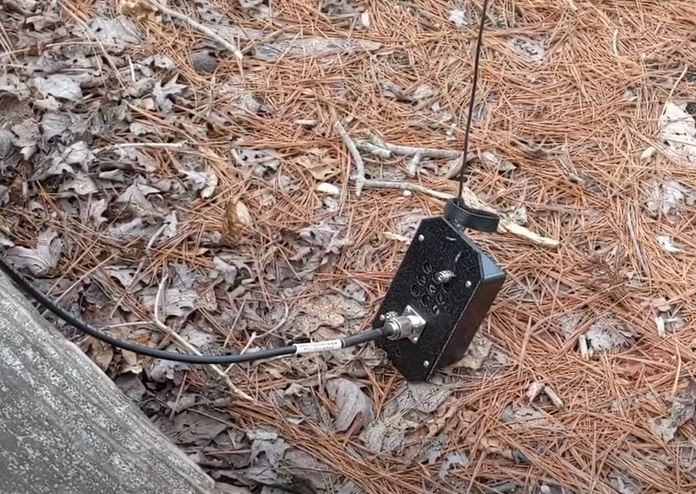 Hey–the proof is in the pudding, right? Let’s put this antenna on the air and make a real-time video of the activation!

Last Wednesday (February 17, 2021), there was a break in the weather so I made a detour to Lake James State Park (K-2739) en route to visit my parents for a few days. I left the house without deciding what park to activate, but picked Lake James because I knew I would have access to tall trees and my pick of operating locations. 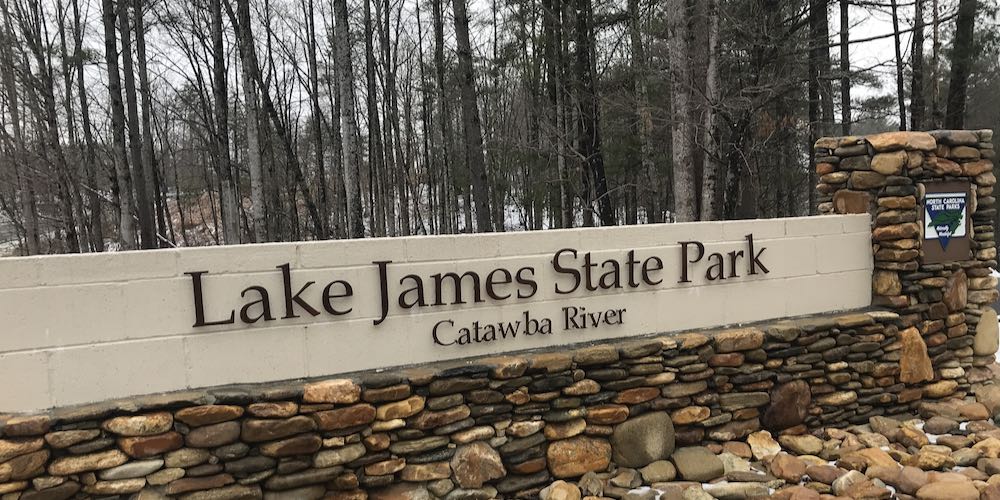 Deploying the MFJ-1984LP is no different than deploying any other wire antenna. It was super easy using my arborist throw line. That thin, rounded end insulator did certainly glide through the tree branches with ease. No hint of snagging. 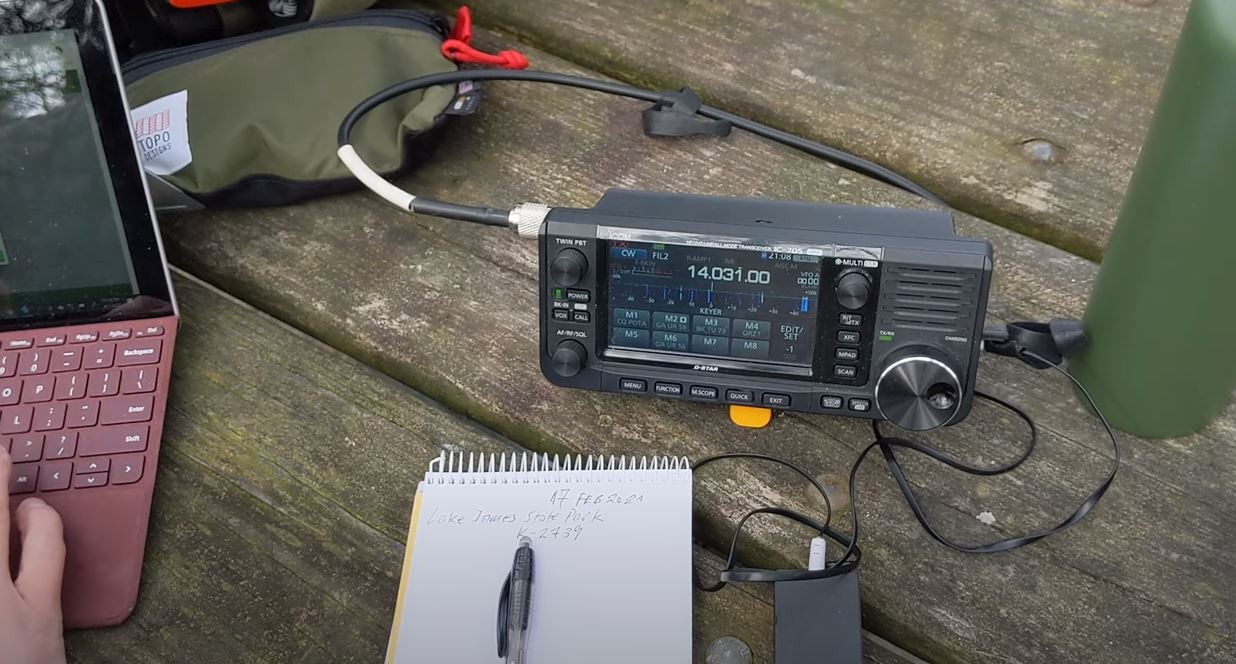 I connected the antenna directly to my IC-705 with no ATU in-line. Hypothetically, I knew this antenna should be resonant on 20 meters where I planned to start the activation.

Keep in mind that pre-made antennas are often designed to be a tad long and need to be trimmed so the operator can tweak the resonant point for their preferred spots on the band. Since I tend to use the lower part of the band for CW, I typically leave my antennas with a resonant point somewhere on the upper side of the CW portion of the bands. It’s not super critical for EFHW antennas because they tend to have ample bandwidth to give a full meter band good matches.

I had not trimmed the MFJ-1984LP, but decided it should be “resonant enough” for my purposes.

I started calling CQ and collected several stations in short order despite the poor propagation that day.

I then moved to the 40 meter band and discovered the antenna also gave me an excellent match there. I started calling CQ POTA and was rewarded with a steady stream of contacts.

I imagine I could have racked up a lot of contacts at that activation, but I made up my mind that I wanted to fit in another quick activation afterwards, so cut it a bit short. 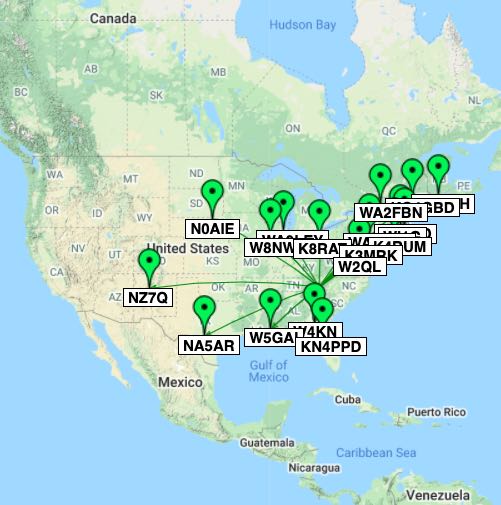 Not bad for five watts and a wire!

I made a real-time, real-life, no edit video of this activation which starts shortly after I deployed the MFJ-1984LP and ends a few moments after my last QSO. Against my better judgement, it includes all of my mistakes (including my inability to form the number 4 that day!): 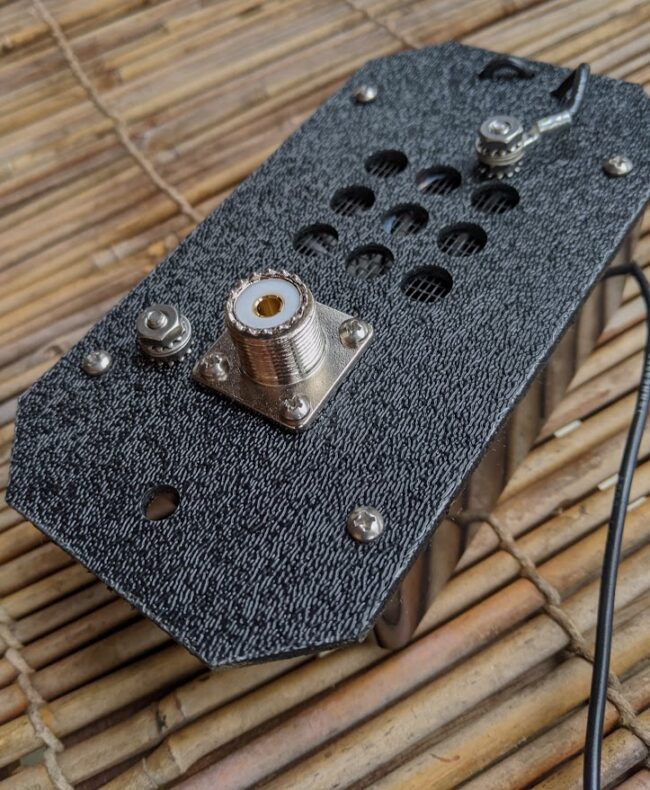 No antenna is perfect and each time I start a product review, I keep a list of pros and cons. Here’s my list for this EFHW antenna:

In the end, there’s no magic here: the end fed half wave is a time-tested, proven antenna design and the MFJ-1984LP delivers. In terms of performance, I couldn’t be more pleased with it right out of the box. This isn’t a military-grade antenna, but it should last for years with proper use.

POTA activators that have access to trees in the field will appreciate the MFJ-1984LP. I should think you could also make an effective “V” shaped antenna if you have a telescoping support that’s 29-33′ tall.

I’m not so sure the average SOTA operator would find this antenna design as convenient–especially on high summits where you’re near or above the tree line. It could be difficult deploying a 66′ wire. That and this antenna is bulkier than other designs. If you’re backpacking it in, you typically want the most compact solution possible (this is where the EFT Trail-Friendly, Packtenna, and QRPguys designs really shine).

I will certainly employ the MFF-1984LP regularly–especially on days with less-than-stellar propagation.  I think this might become a go-to antenna for the MTR-3B, LD-11, and IC-705 since all of them lack an internal ATU.

If you’re looking for an affordable, effective wire antenna, I can certainly recommend the MFJ-1984LP.

Do you have an MFJ end fed half wave antenna? What are your thoughts?