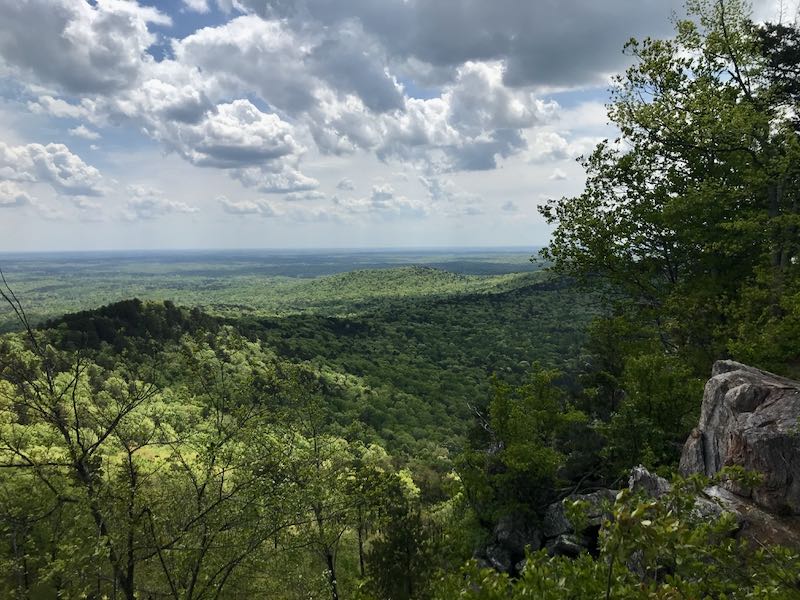 It’s actually quite odd that I’ve never activated this park during the weekly trip to do a little caregiving for my folks: Crowder’s Mountain State Park is a reasonable detour especially compared to some of the more remote parks I’ve visited recently.

What’s really impressive about Crowders Mountain is that although it’s not as large as a national park and it’s very close to the city of Gastonia, it has no less than two unique summits that qualify for Summits On The Air: The Pinnacle and Crowders Mountain.

Both summits are accessible from the main park visitors’ center via a well-maintained trail network.

The propagation forecast looked pretty grim and after my last activation, I thought I might increase my chances of success by hiking to both summits in one visit. This made sense because I would only need 4 contacts per summit to have a valid SOTA activation and I could combine the contacts from each summit to hit 10 total contacts to activate the state park.

I decided to call the park and ask how long it would take to hike to both summits: the ranger told me “about 5 hours, or less if you’re fast.” That meant that once I added in my setup/pack up times and on-the-air time, I would be staring at a minimum of 7-8 total hours.

I (wisely) decided to pass on that opportunity. I simply didn’t have enough time in my schedule for that many hours at the park. That, and I didn’t want to feel rushed–I wanted to enjoy my outdoor time.

I decided instead to activate one summit and simply plan on spending more time on the air then plan to come back to the park for the second summit on a different day.

Before going to bed Monday night, I checked out the trail map and decided to activate The Pinnacle. 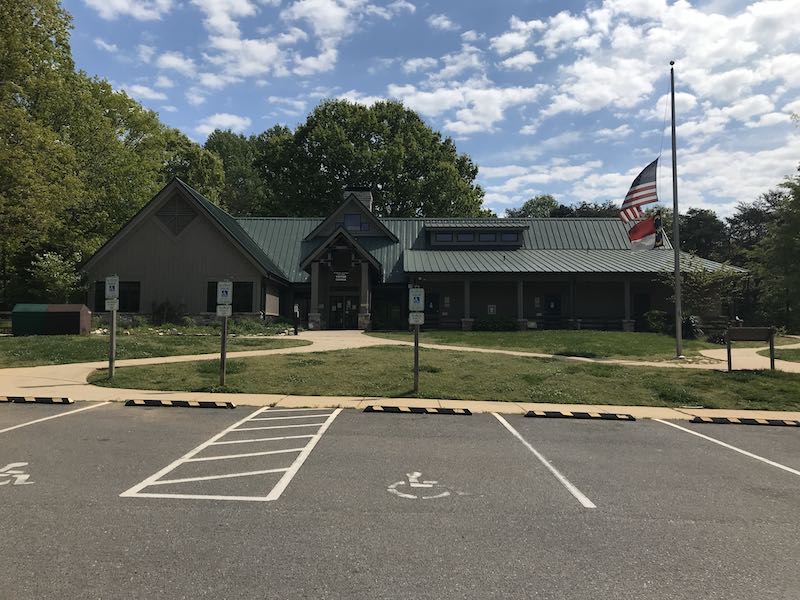 I arrived at Crowders Mountain State Park around 11:00 AM local–the weather was nearly ideal.

I had pre-packed all of the radio gear and supplies in my GoRuck GR1 rucksack, so once I arrived, I grabbed the pack, put on my hiking boots, a hat, and hit the trail. 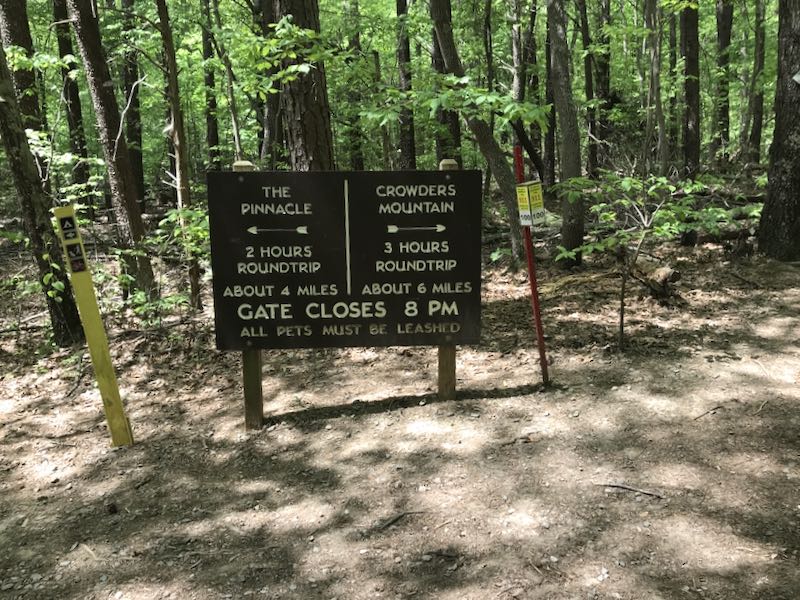 I’ve read that Crowders Mountain State Park can get very busy and it’s no surprise as the park is within easy reach of Shelby, Gastonia, and the Charlotte Metro area. Fortunately, I was visiting on a Tuesday morning, and while I saw at least 30+ cars parked in the main parking lot, I passed other hikers only a few times on the Pinnacle trail. It’s a sizable park and can easily swallow 30 groups of day hikers! 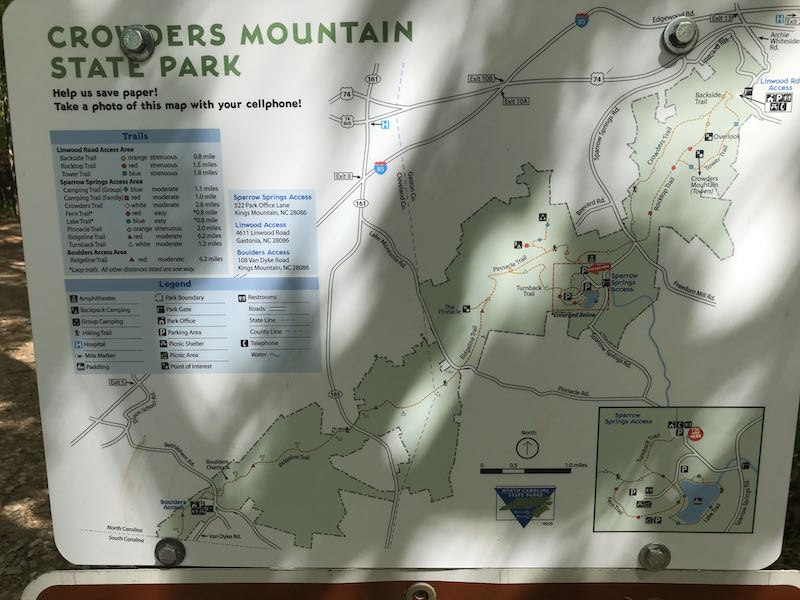 I followed the orange-blazed trail to the summit of The Pinnacle. 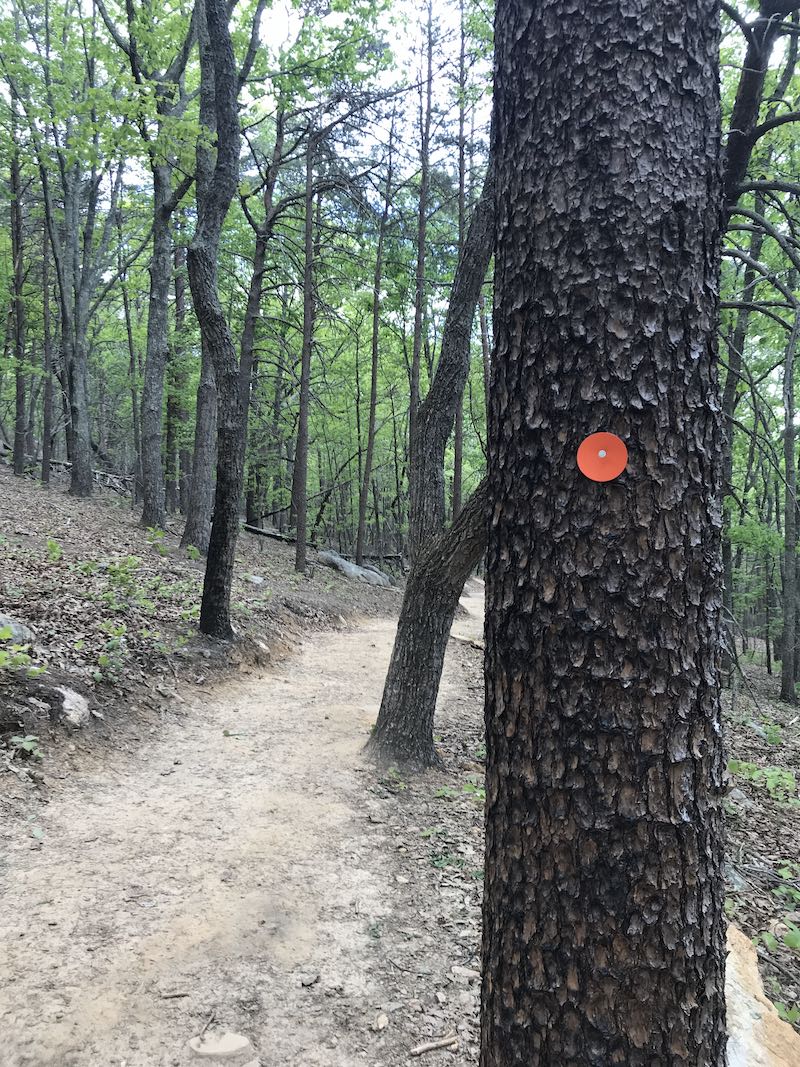 The hike was very enjoyable and, frankly, not what I would consider strenuous, but it had enough elevation change to feel like a proper hike. I allowed an hour to reach the summit, but it only took about 40 minutes or less. 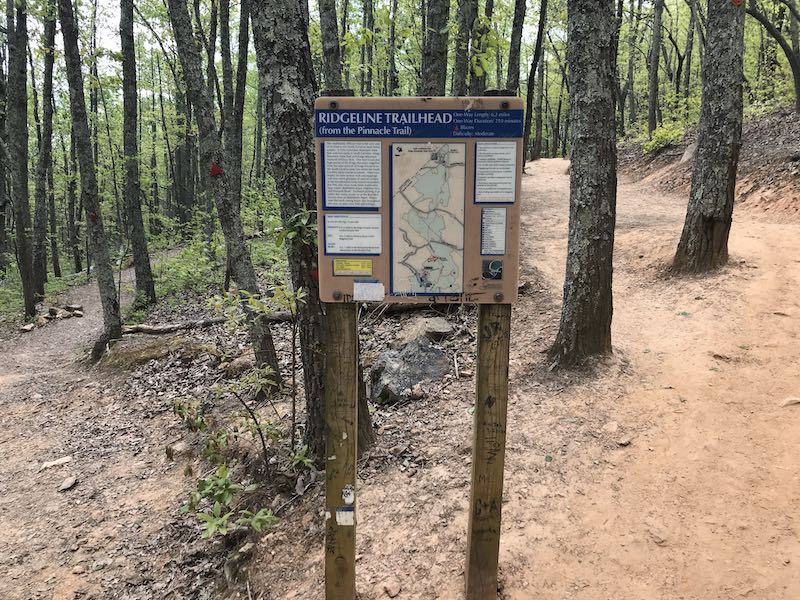 Near the summit, there’s a fork in the trail: if you take a right, it leads to the summit, if you take a left, it’ll lead you on a much longer Ridgeline Trail that will eventually take you into Kings Mountain State/National Park–you’d better believe I’ll try that one day in the future! It would be fun to activate two parks and a summit all on foot.

I took a right at the fork and the .2 mile long trail zig-zagged up the side of The Pinnacle. 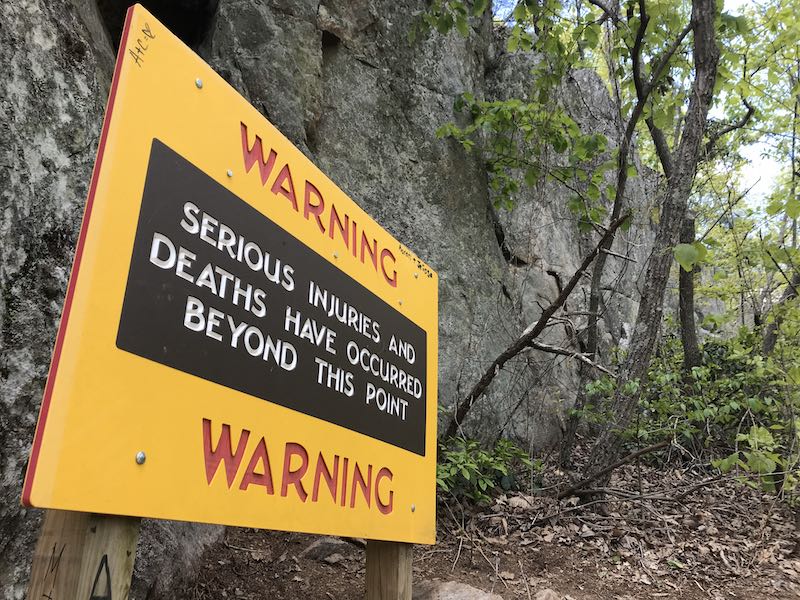 I was a little surprised to be greeted by the sign above.  It’s true that the summit area is quite rocky and you have to watch your step, but this warning is a bit extreme in my opinion (especially since the SOTA activation I did with my daughter recently was orders of magnitude more dodgy!). 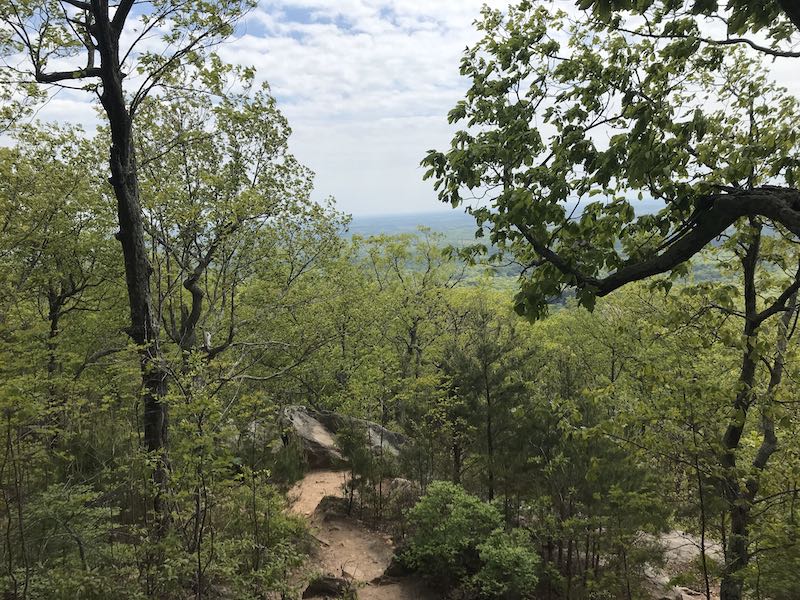 If you are activating The Pinnacle and don’t want to climb up the rocky path, no worries. I’m certain the area where the sign is located is well within the SOTA summit activation zone. 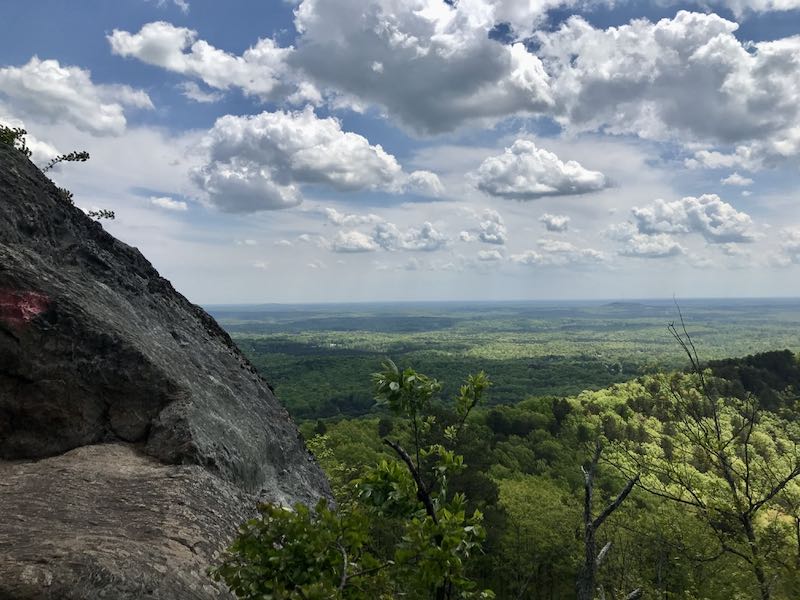 Although The Pinnacle is only a “one point” summit, when you reach the top you’re greeted by some impressive views.

The Pinnacle and Crowders Mountain are both outlying mountains so are the tallest points in the area offering beautiful, long-range vistas.

There were perhaps a half dozen hikers hanging out on the summit. I found a quite spot to set up on the side of the summit only a few meters from the top. 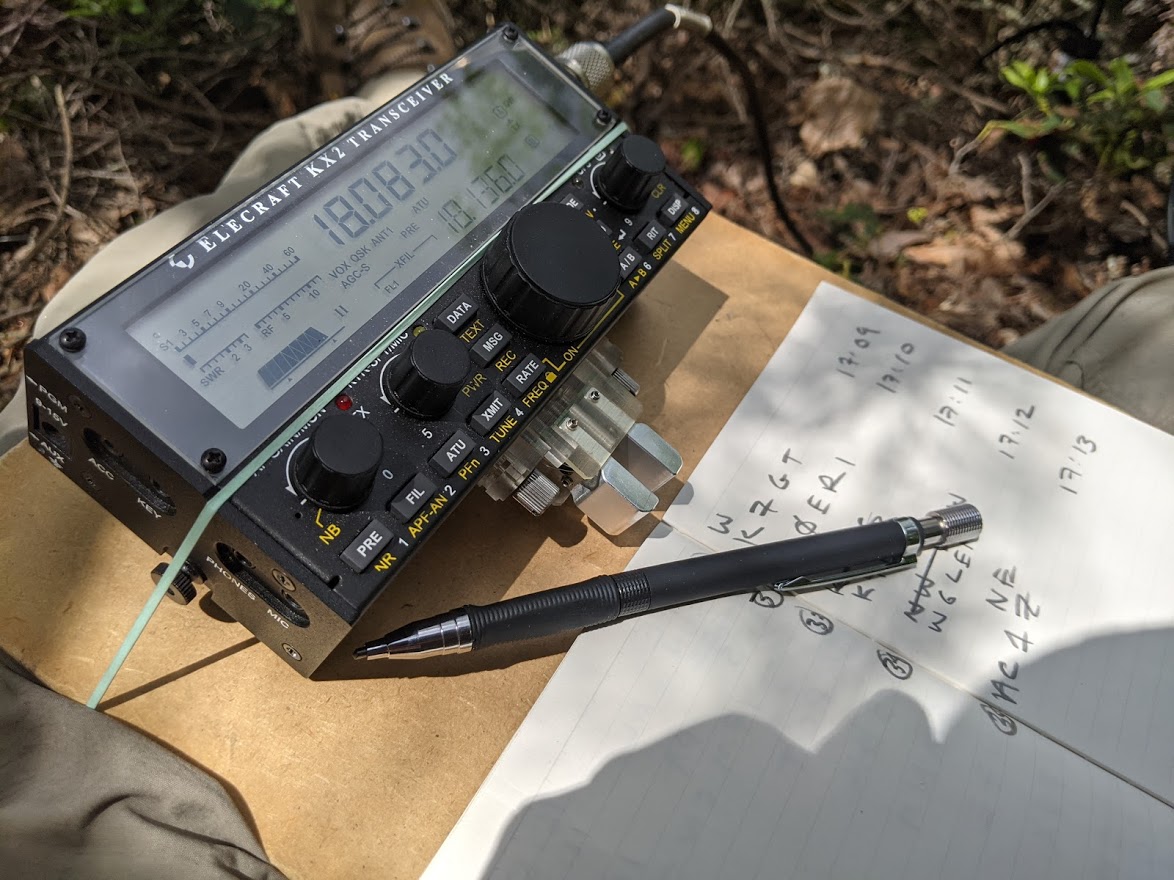 During the hike, my buddy Mike (K8RAT) sent a text noting that propagation on 40 meters was non existent. He suggested I play on 20 meters and above, possibly including 30 meters.

Later on, I found out that Mike was 100% correct. Several POTA activators that day mentioned on the POTA Facebook group that 40 meters was completely wiped-out. 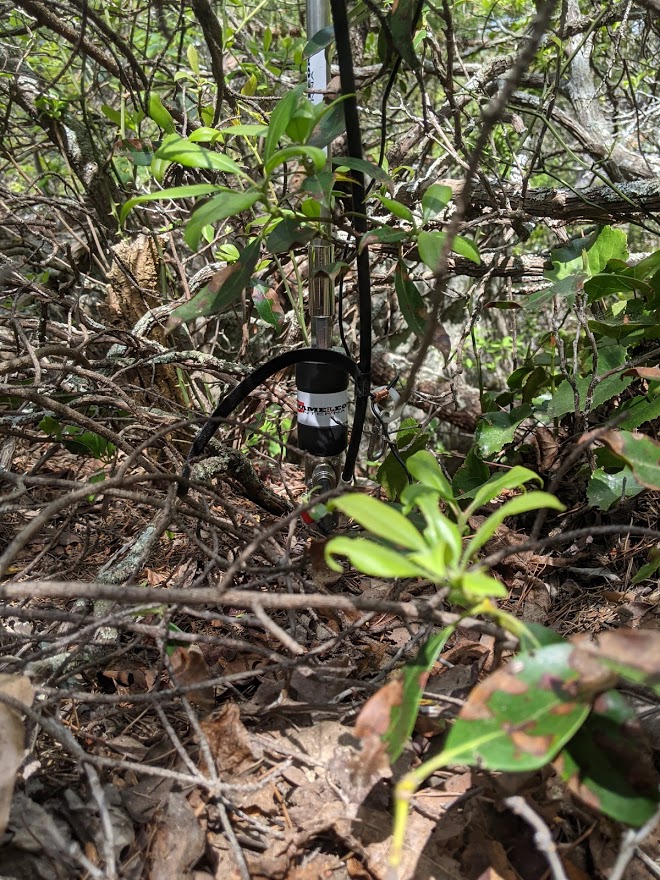 I installed the Chameleon MPAS Lite vertical antenna next to me. I’ll admit that I was a little worried it might be too rocky to plunge the MPAS Lite’s stainless spike in the ground, but it turned out not to be the case. 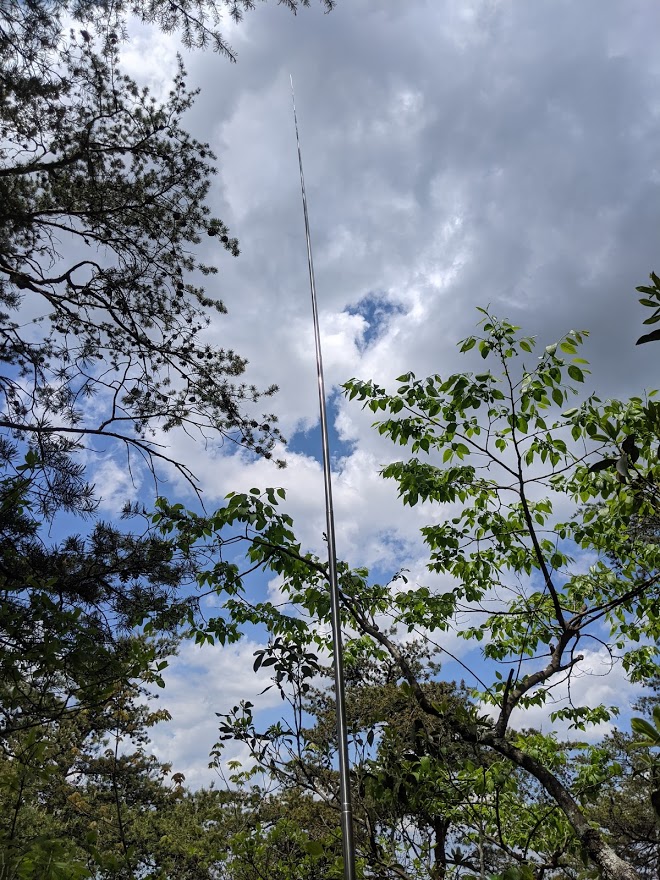 The CHA MPAS Lite has really proven itself as an invaluable SOTA antenna. While the stainless spike adds weight to my pack, it’s less fussy than dealing with guy lines and telescoping fiberglass poles and much quicker to set up.  You do need enough ground to plunge that spike into, but if there are trees and bushes on the summit, it’s probably doable!

I started recording a video (see below) of the activation, spotted myself to the SOTA network (even though it would have likely auto-spotted me via the Reverse Beacon Network)  and hopped on 20 meters. 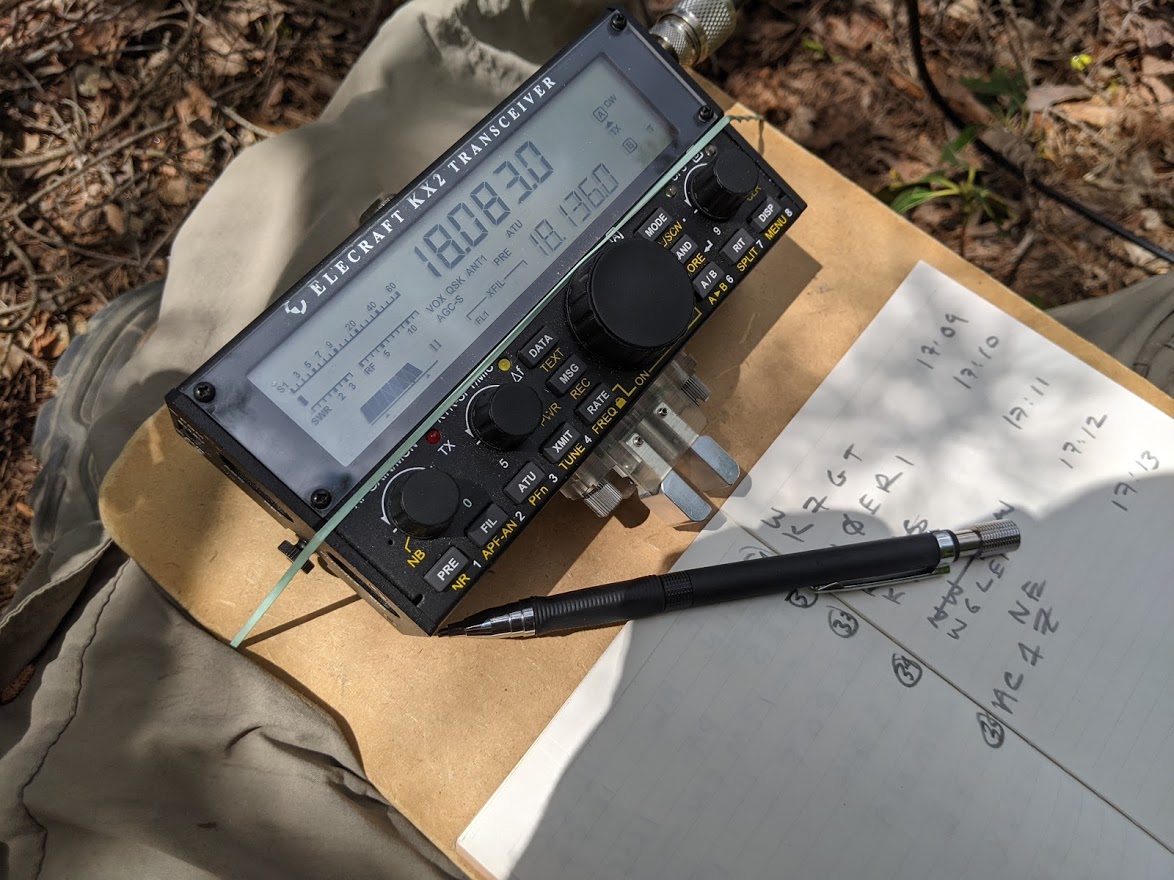 I had no idea at the time, but we were experiencing a solar flare which explained why 40 meters was completely wiped out.

The effect on 20 meters was simply epic.

I called CQ and was instantly rewarded with a long, continuous string of stations. Within 26 minutes, I had already worked 23 stations with 5 watts and the MPAS Lite vertical. A stark contrast to my previous POTA activation.

And here’s the thing: the flare opened up 20 meters to local/regional stations as well. I worked stations as close as South Carolina, Georgia, and Tennessee–this is simply unheard of normally. Of course, stations on the west coast were also booming in.

I was a little surprised I didn’t log any European stations on 20 meters, but I suspect they were having a difficult time competing with the strong signals from North America during the flare.

I short: the band opening was amazing fun and even renewed my faith in our local star just a wee bit. (Ha ha!)

After playing on 20 meters, I decided to try 17 meters.

Wow! Without a doubt, I worked more stations on 17 meters in short order than I’ve ever worked during a field activation. In 10 minutes, I worked 12 stations. As with 20 meters, the flare opened up stations that would normally be in my 17 meter skip zone.

Here I was worried about logging the ten stations needed to validate my park activation!  After logging 35 total contacts, I decided to pack up.

Here’s a QSO Map of the activation (click to enlarge): 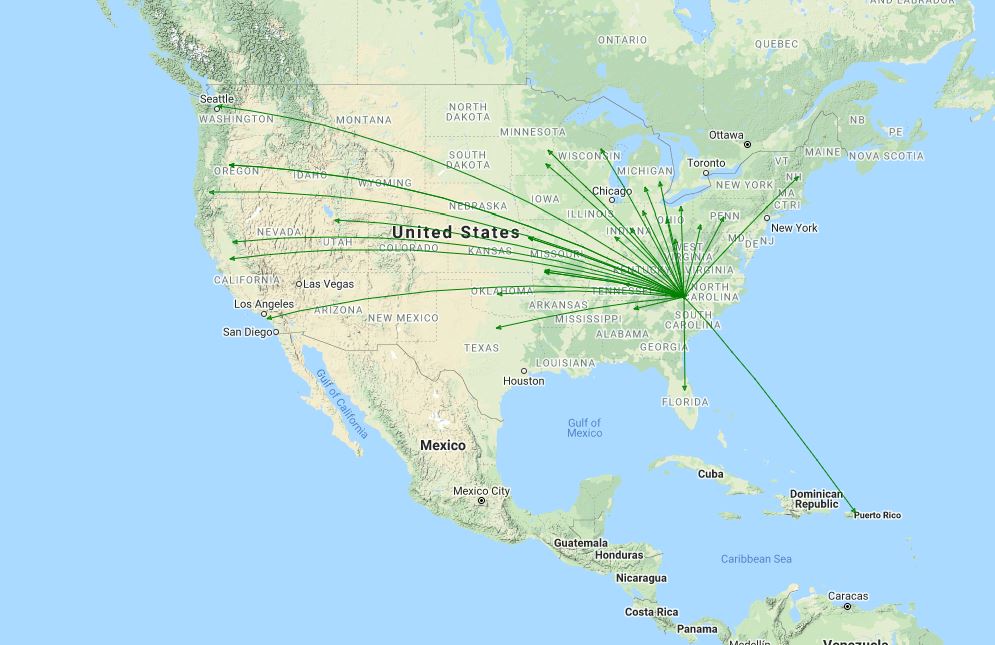 Here’s one of my unedited real-time, real-life videos of the entire activation:

Although the weather app on my phone wasn’t showing any afternoon thunderstorms nearby, there were some patchy dark clouds forming on the other side of the summit and the winds were shifting, so I decided to call it a day and enjoy the hike back down the mountain.

Fortunately, the clouds never amounted to anything but I don’t take my chances with spring weather–it’s fickle, especially along the North Carolina/South Carolina line. That, and frankly, I needed to stick to my travel schedule. 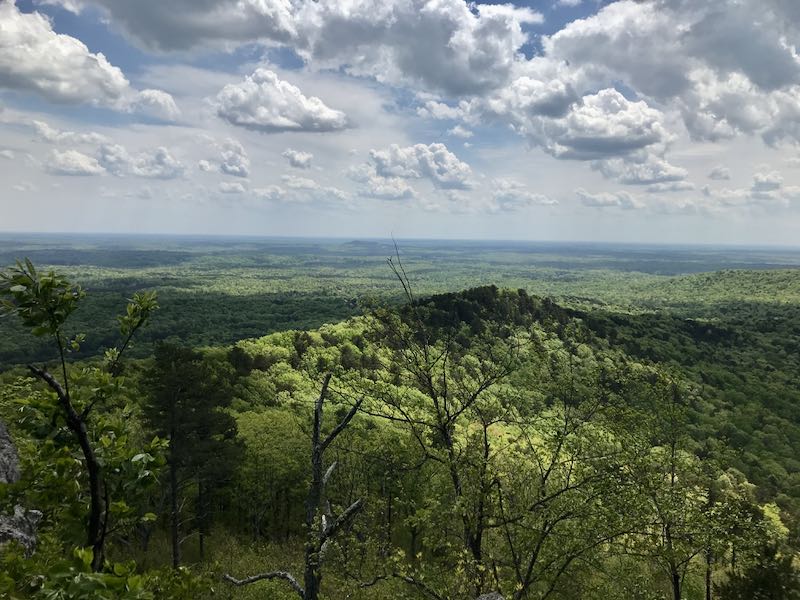 I took my time on the way back down and simply soaked up the outdoors. 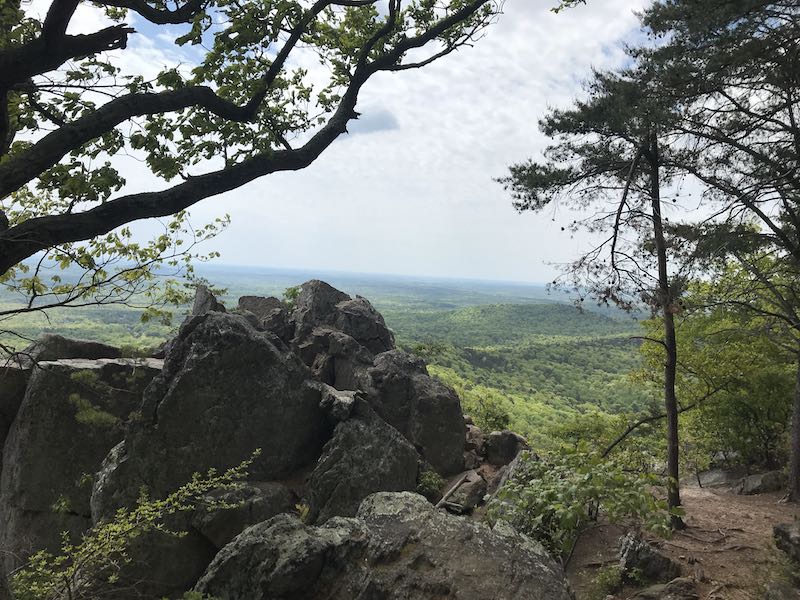 I love doing field activations of all types, but I’ll admit that I’m becoming addicted to Summits On The Air because of the hiking opportunities it presents.

There are few things in the world I enjoy more than hiking.

When I’m on a trail, all of my concerns seem to dissolve. 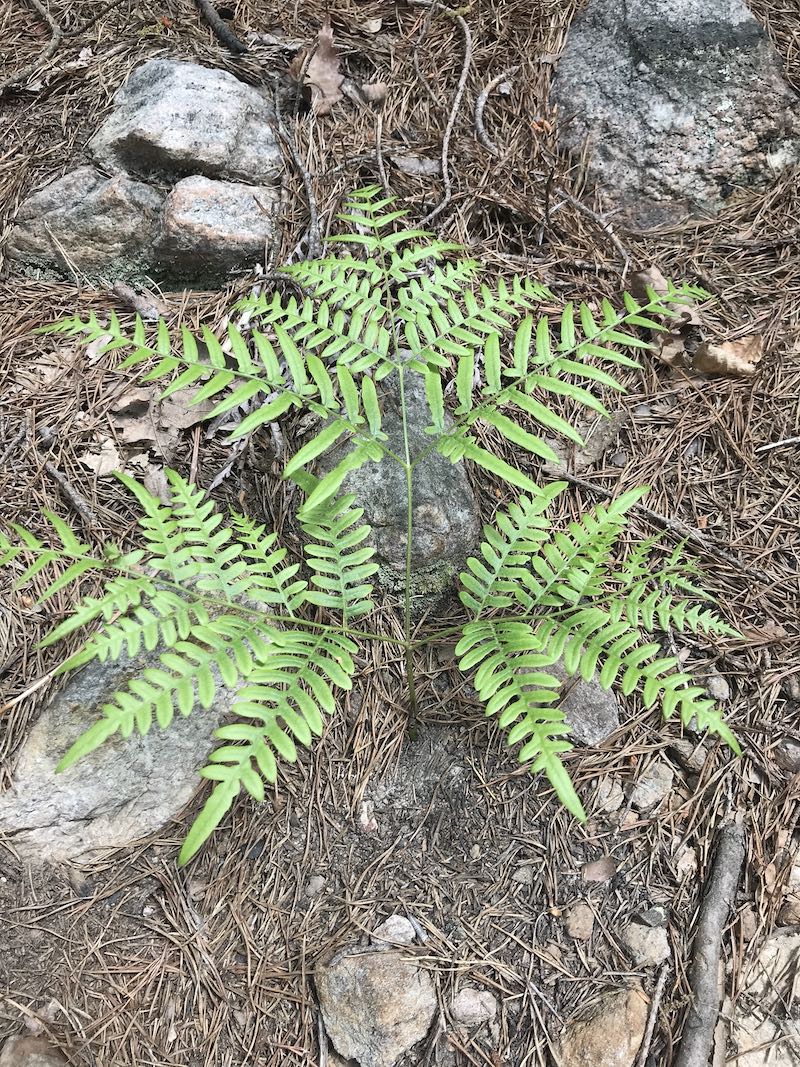 On the return hike, I passed by a group of three hikers. All of them were staring at their phones while hiking and one tripped on a tree root in the path. They caught themselves before hitting the ground.

I’ll admit I was thinking at the time that mother nature was saying, “Hey! Wake up, disconnect and enjoy the beauty around you! You need some perspective!” 🙂 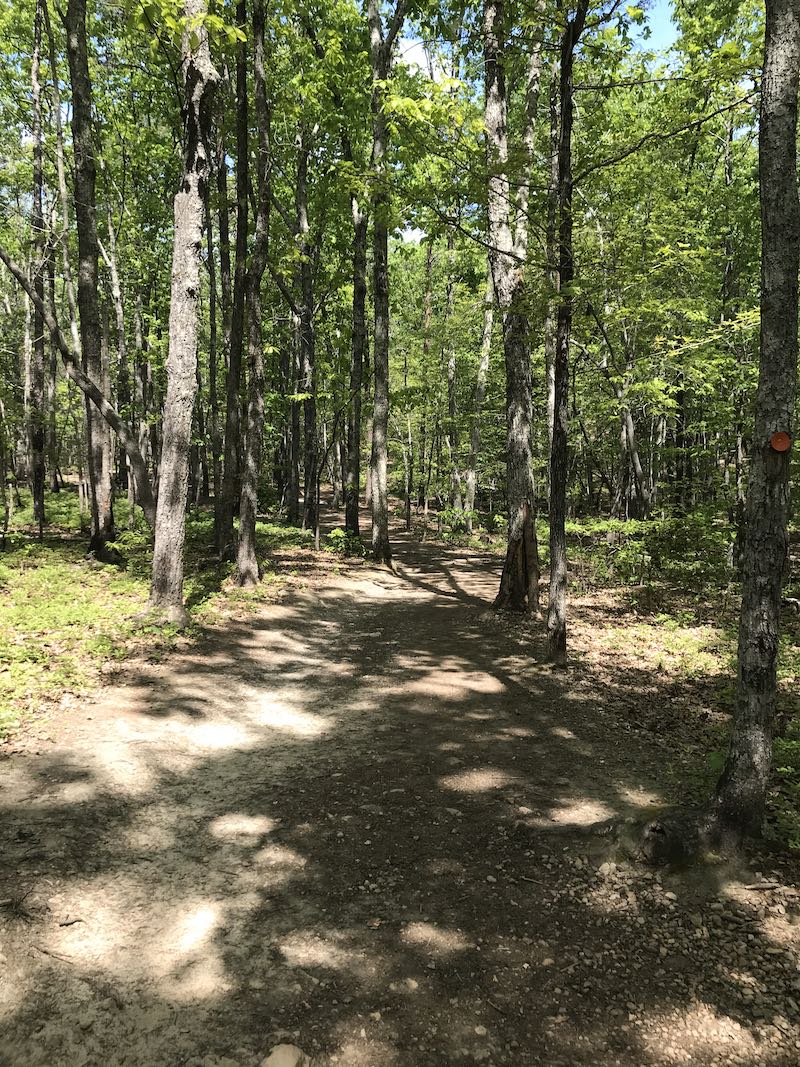 Sometime, I’d like to hit the trails as soon as the park opens and, perhaps, activate both Crowders Mountain and Kings Mountain parks on foot. That would likely take an entire day when I include the time on the air, but it would also be a lot of fun. 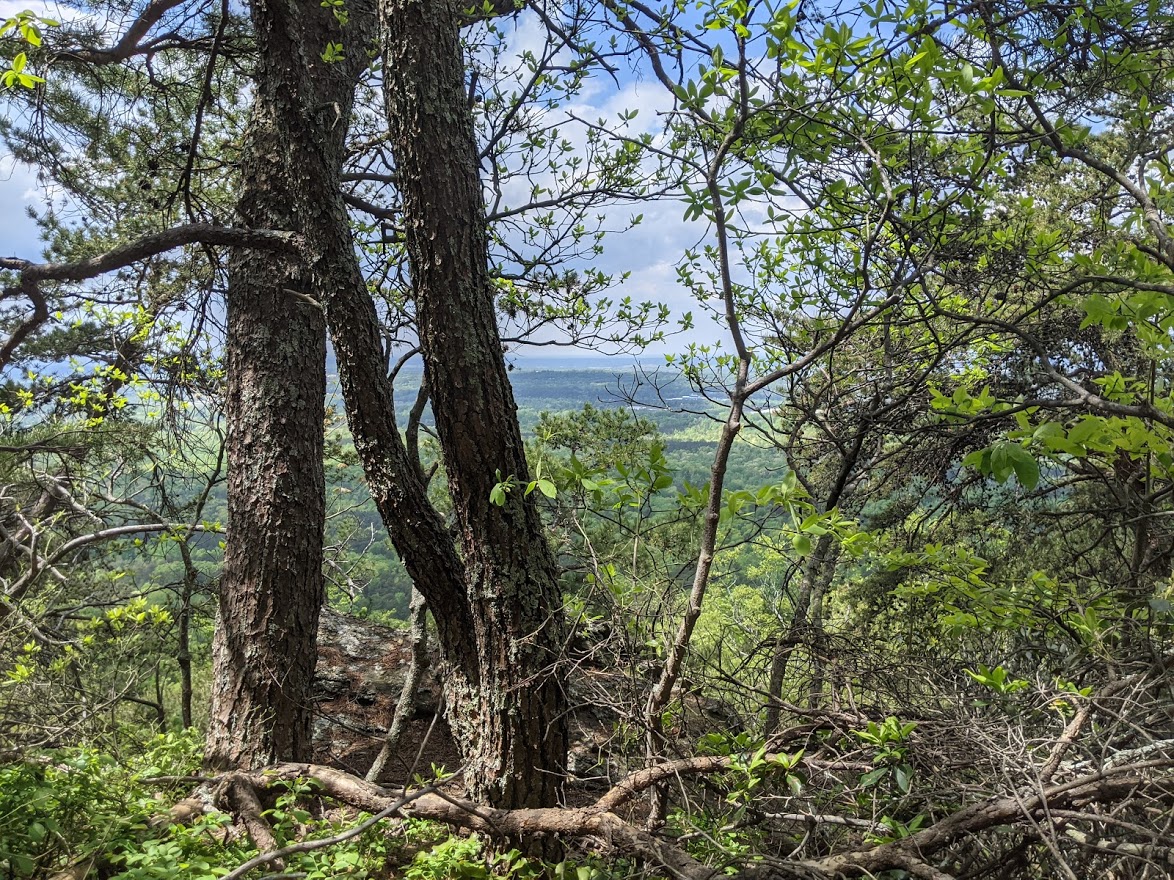 I was telling my wife yesterday that I actually enjoy writing up the odd field report on QRPer. It hit me that there are a couple of reasons why…

For one, a number of readers have reached out and thanked me because they enjoy living vicariously through my field reports and videos.  I get it. My family and I enjoy watching YouTube videos of travelers around the world. We avoid the personality-driven channels and focus more on those that are less “produced.” It gives us an opportunity to travel to, say, Spain, France, Finland, or Turkey when we can’t presently do so. It pleases me to no end thinking that my reports and videos could, even in some very small way, offer a little vicarious travel to others.

Secondly, writing up these reports gives me an opportunity to re-experience some of my field time and sort through photos I might have taken along the way. Although it takes a few hours to write a report, I truly appreciate the experience.

Thank you, dear reader, for spending time with me during this outing!

Do you enjoy QRPer.com?