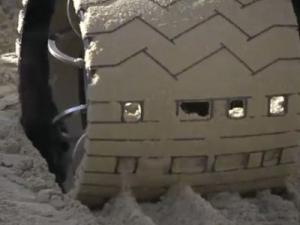 Does this pattern remind you of something? Yep, the letter “L”. The other tires produce a “J” and “P” on the Martian surface. (Photo: NASA/JPL)

As I watched, I noticed something very peculiar about the tires–right around mark 5:15, one can see a pattern imprinted on them. At first I thought nothing of it, assuming NASA scientists had pondered the perfect pattern for traction and also shedding any trapped rocks or debris.

But–as my curiosity was piqued– a little research on the rover tires revealed this article from TyrePress.com: “Curiosity’s tyres ‘tagging’ Mars” in which the pattern is explained:

Yesterday the Mars Curiosity rover successfully went into action on the surface of the red planet, and the vehicle’s tyre tracks have gained a measure of notoriety. It turns out that Curiosity is ‘tagging’ the surface of Mars as it drives about.

A series of notches included in the track tyre tread is not just a pretty pattern – the notches are in fact Morse Code and spell out the letters ‘JPL’, short for NASA’s Jet Propulsion Laboratory. Curiosity is now busy leaving the laboratory’s initials all over Mars[;] however [this] is not just wanton interplanetary vandalism – the dots and dashes are part of the rover’s visual odometry system, used to estimate changes in position over time.

Brilliant!  Not to mention, practical…NASA has just put morse code on the Mars surface!

Perhaps it proves that it’ll be very difficult to do away with morse code. At least, until NASA sends a sweeper or Zen garden raker-rover to Mars.