Admittedly, I love the analogesque dial above the tuning knob:

When you open your June 2012 issue of QST, you will find that Kenwood has published a photo and ad (see below) of their new TS-990S in advance of Dayton.

We also know a few specs/features: 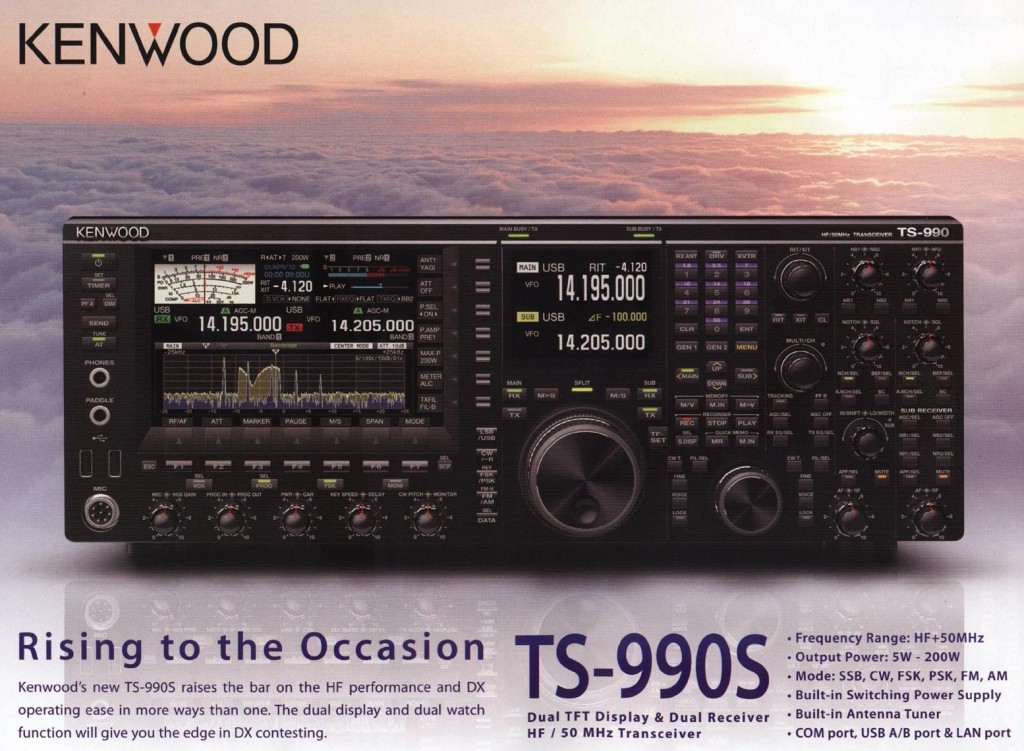 For further updates and hi-res photos from Dayton, follow our tag: TS-990S

Kenwood released the following press release today. I had hoped it would contain more information. We did recently learn about some TS-990 facts, and now, through this Kenwood PR,  we learn that the TS-990 will not see production until late 2012 and that the model on display at the Dayton Hamvention will be a “reference exhibit.”

April 18, 2012
New Amateur Radio Product to be Exhibited Prior to Worldwide Launch

JVC KENWOOD Corporation is proud to announce that the prototype of a state-of-the-art Amateur transceiver scheduled for worldwide launch under the Kenwood brand in the winter of 2012 will be unveiled as a reference exhibit at Dayton Hamvention 2012 to be held in Dayton, Ohio, USA (May 18-20). It will also appear at events in Germany and Japan.

Prior to the launch of the TS-990, a prototype will be displayed as a reference exhibit at Dayton Hamvention 2012 in Dayton, Ohio, USA (May 18-20), at HAM RADIO 2012 in Friedrichshafen, Germany (June 22-24), and at Ham Fair 2012 in Tokyo, Japan (August 25-26).
Please note that as this product is under development, published information is subject to change without notice.

There is still very little known about the yet-unreleased, highly-anticipated Kenwood TS-990S HF transceiver, but we’ve confirmed just a few details from a contact at Kenwood…

No promises on ship dates yet…but they have confirmed that the new rig will be on display at the 2012 Dayton, Ohio, Hamvention.

To be clear, Kenwood did not confirm the model number of TS-990S; it was implied.

Check back with QRPer.com as we will post early photos from Dayton.