First time in the field with the Xiegu G90 QRP transceiver

Posted on June 5, 2020 by Thomas Witherspoon 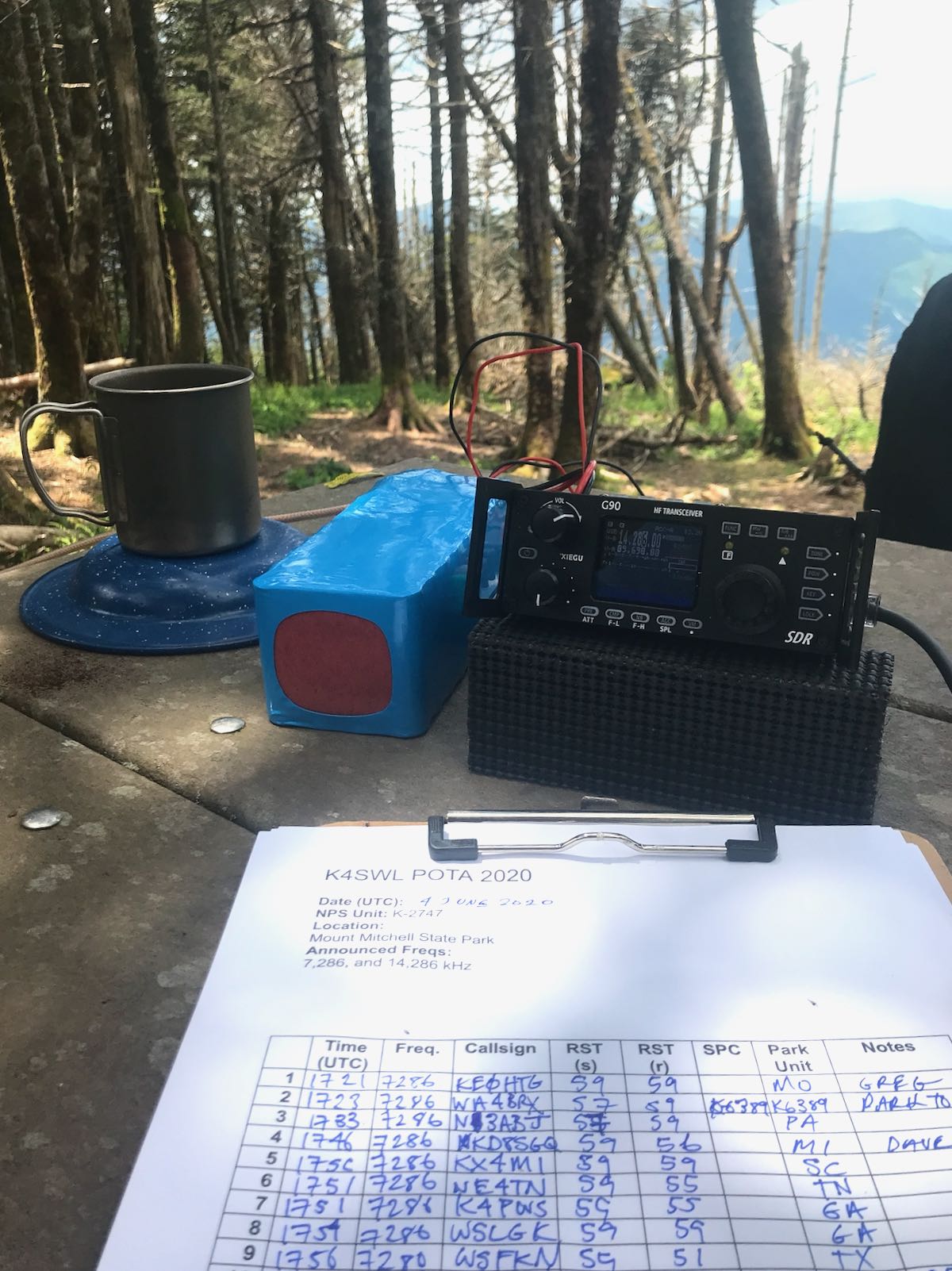 Earlier this week, I took delivery of a new Xiegu G90 general coverage QRP transceiver. I’m reviewing this portable rig for The Spectrum Monitor magazine. Although this Chinese manufacturer has been around for a few years, this was my first purchase of a Xiegu product.

I’ve had the G90 on the air from home for a couple days, but I feel like the best way to test a QRP transceiver is in the field!

Due to the Covid-19 lock-down and a number of our regional parks either being closed or severely limiting visitors, I haven’t made many POTA (Parks On The Air) activations this year.

Recently, however, North Carolina has been opening state parks and allowing visitor access to hiking trails and picnic areas, but keeping all facilities (stores, cafes, visitor centers, and restrooms) closed to the public.

Yesterday, our family decided to pack a picnic lunch and head to Mt. Mitchell State Park (POTA site K-2747). My wife knew I was chomping at the bit to play radio in the field and actually made the suggestion. (She’s a keeper!) 🙂

There were only a dozen people at the park so we essentially had the place to ourselves. Better yet, it gave me the opportunity to pick out the most ideal picnic site to set up and deploy my EFT Trail-Friendly 40/20/10 antenna. 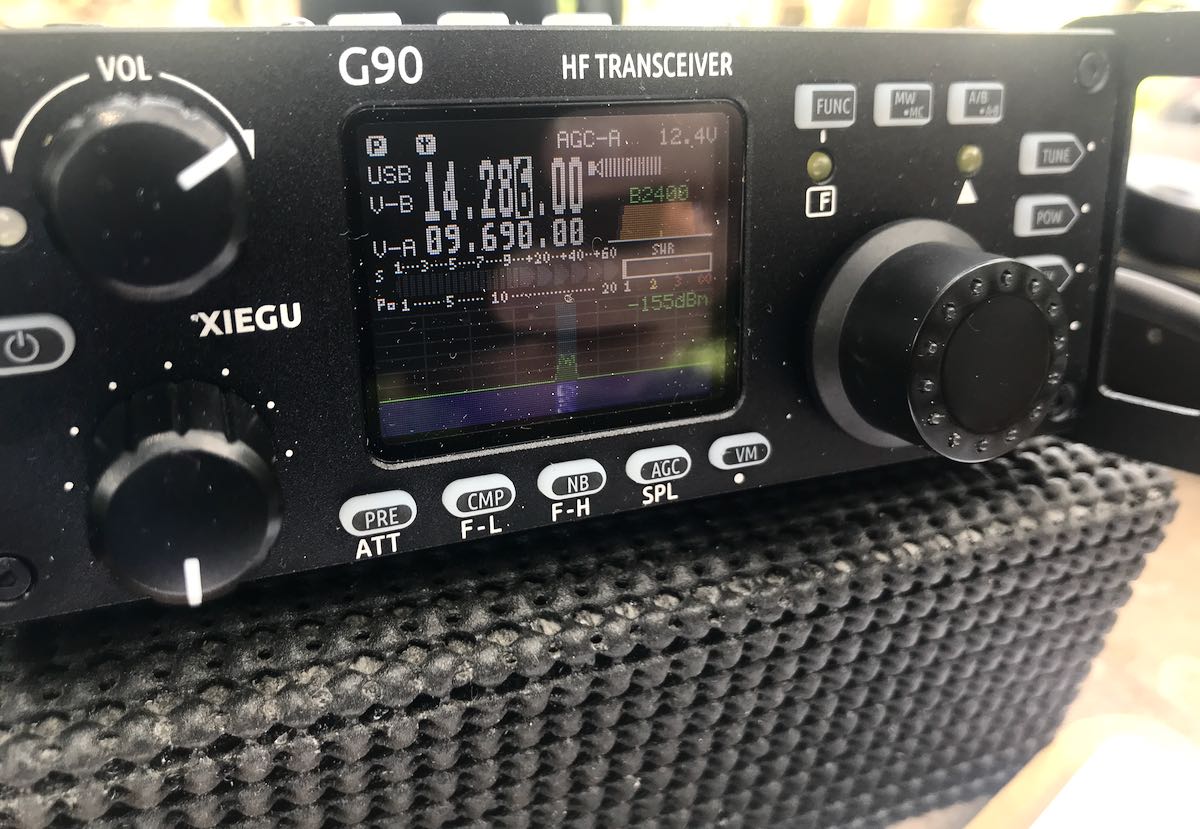 The G90’s backlit color display was actually quite easy to read in the field. My phone’s camera filter made it look darker than it actually was.

My POTA activation was unannounced and I didn’t have Internet access to self-spot on the POTA website, so I started the activation old school by calling “CQ POTA” until someone happened upon 7286 kHz.

After perhaps 10 minutes of calling CQ, Greg (KE0HTG)–a helpful POTA chaser–finally found me and spotted me on the network.

I worked a few stations in succession, but summer QRN levels were incredibly high and I believed static crashes were cloaking would-be contacts. [Actually, thanks to this feedback, I now know the G90 does indeed have an RF Gain control (firmware version 1.73 and higher).] I asked one kind operator if he would hold while I switched over to my trusty Elecraft KX2.

The KX2 did a much better job managing the noise and that same op was easily readable where with the G90 I could barely copy him. I suspect I could have tinkered with the G90’s AGC levels to better mitigate the noise, but I didn’t want to do this in the middle of an activation. 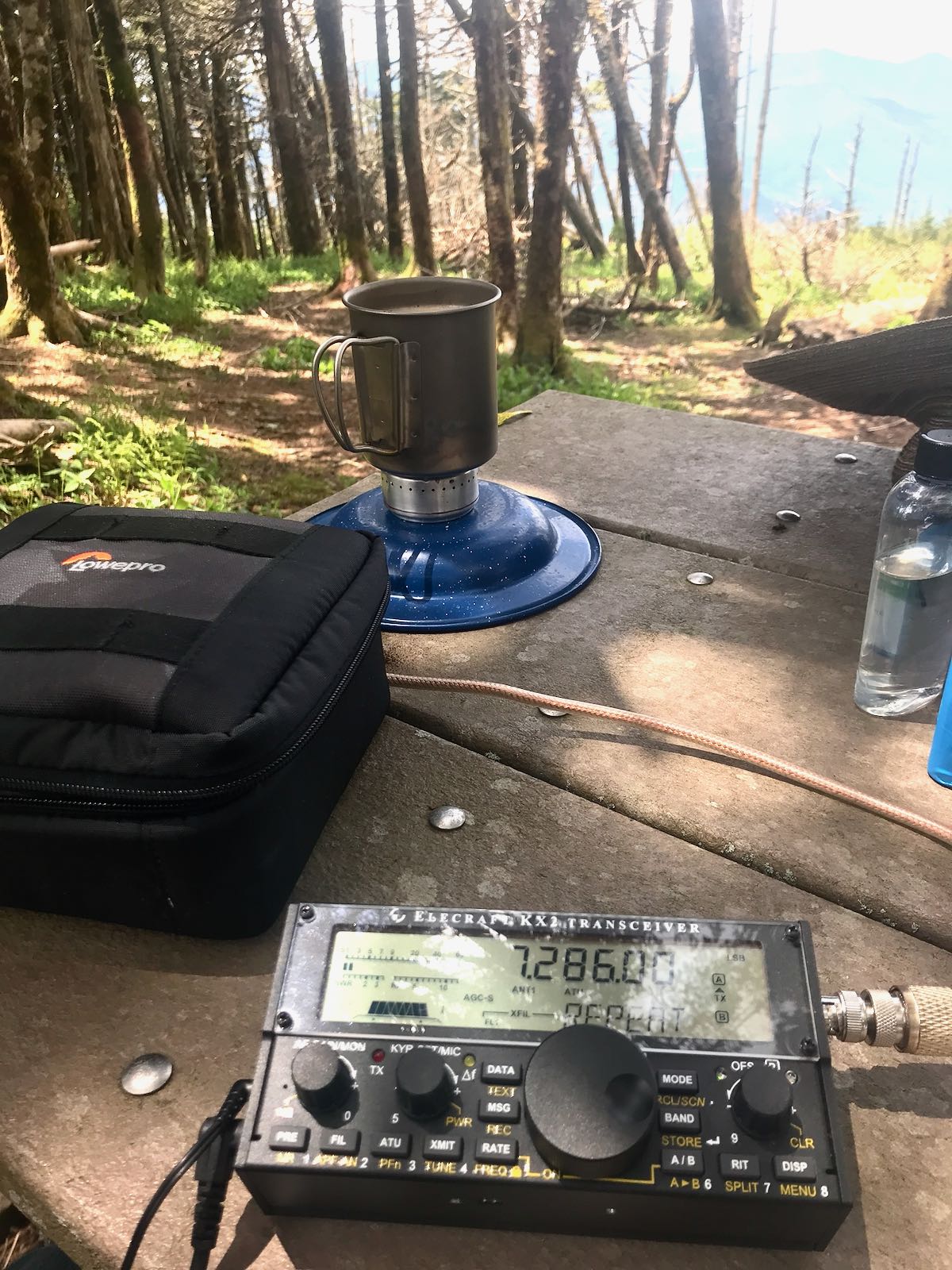 I worked about fifteen stations with the Elecraft KX2 on 40 meters.

One real advantage of the KX2 during a POTA activation on SSB is its voice memory keyer (of course, it also has a CW memory keyer). I simply record my CQ and have the KX2 repeat it until someone replies, then I hit the PTT to stop the recording. Not only does this save my voice, but it also gives me an opportunity to eat my lunch while calling CQ! 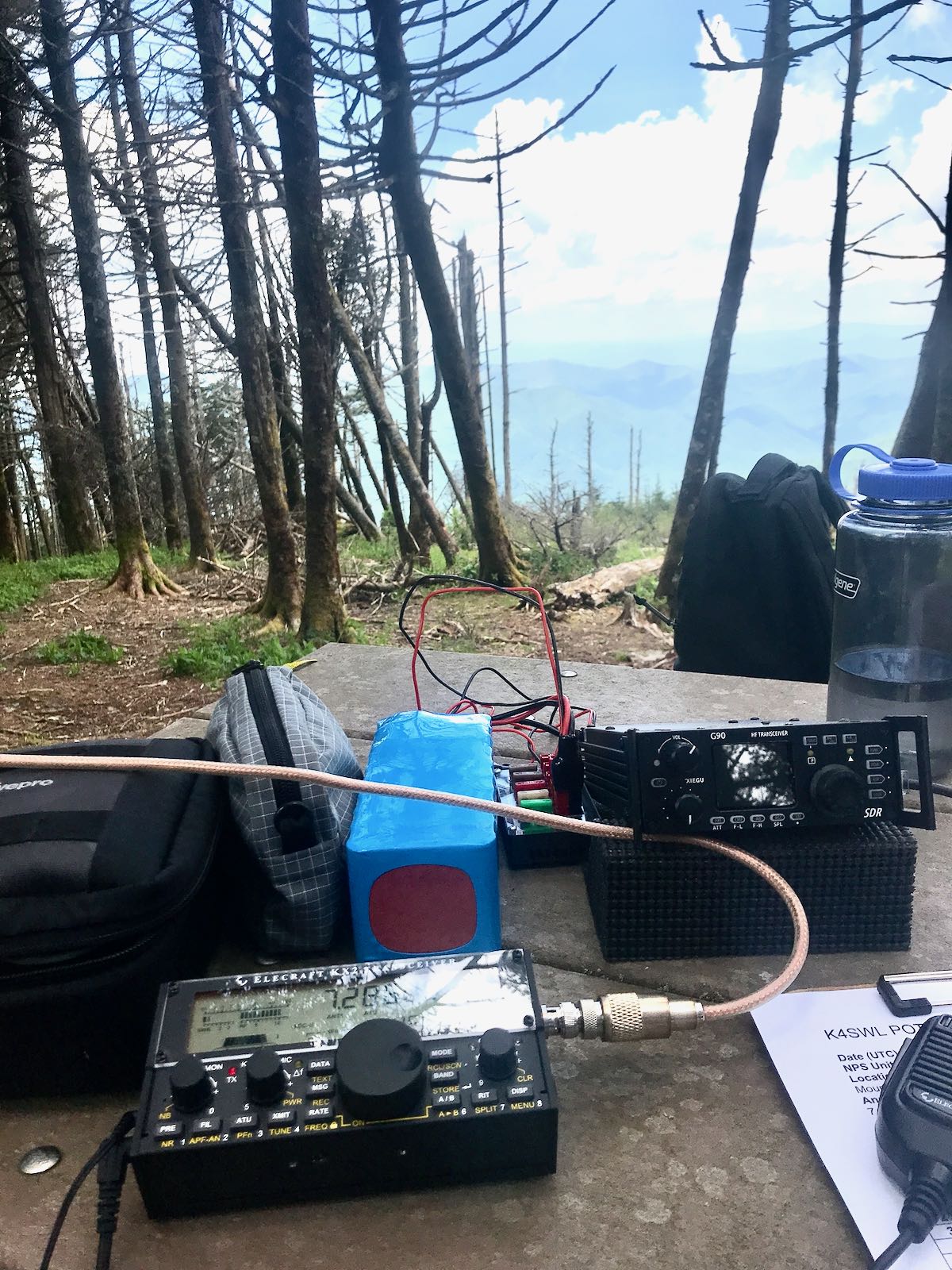 I eventually moved up to the 20 meter band and switched back to the Xiegu G90.

On the 20 meter band, the G90 handled conditions like a champ. 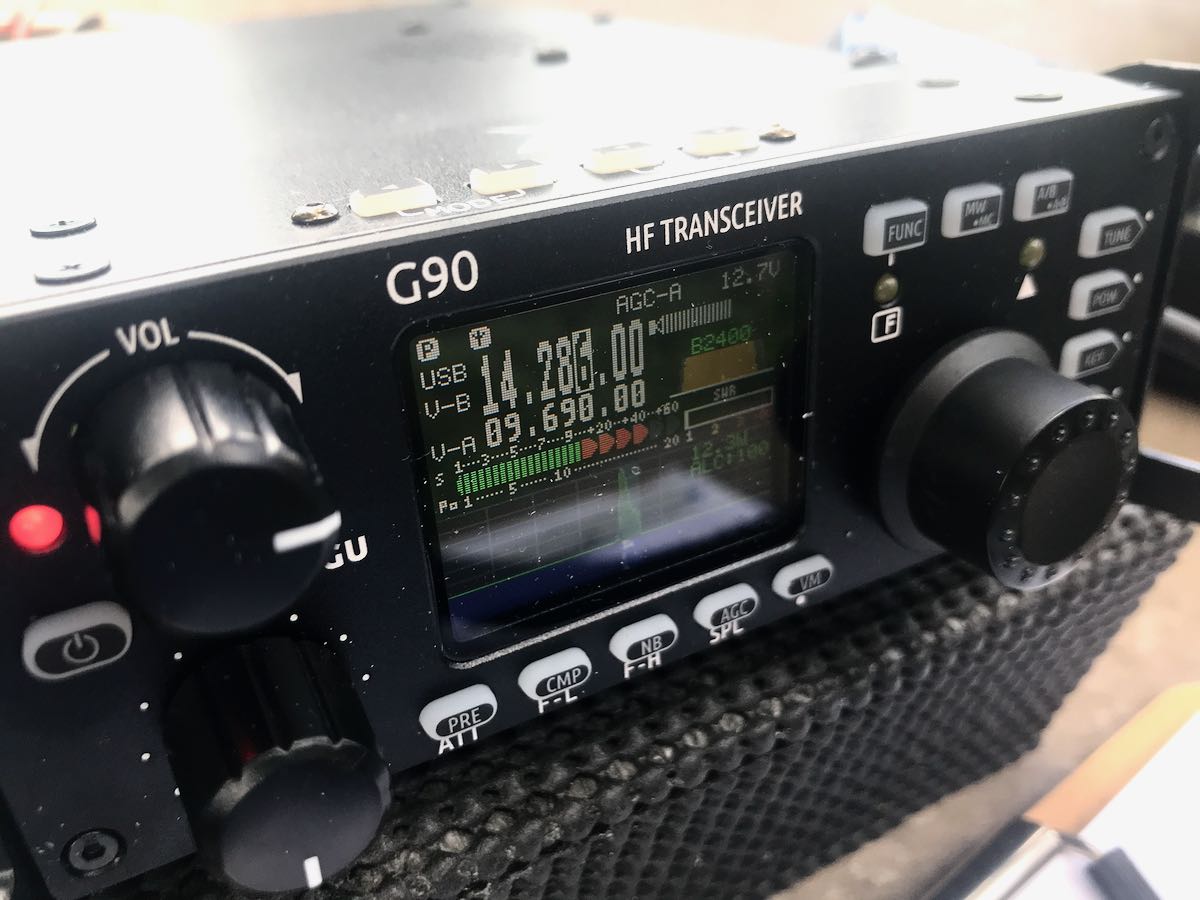 Someone eventually spotted me on 20 and I worked a few stations.

The 20 meter band was very fickle and unstable yesterday. For example, I struggled to finish a contact with an operator in Massachusetts, yet got a solid 59 report from Spain with only 20 watts. 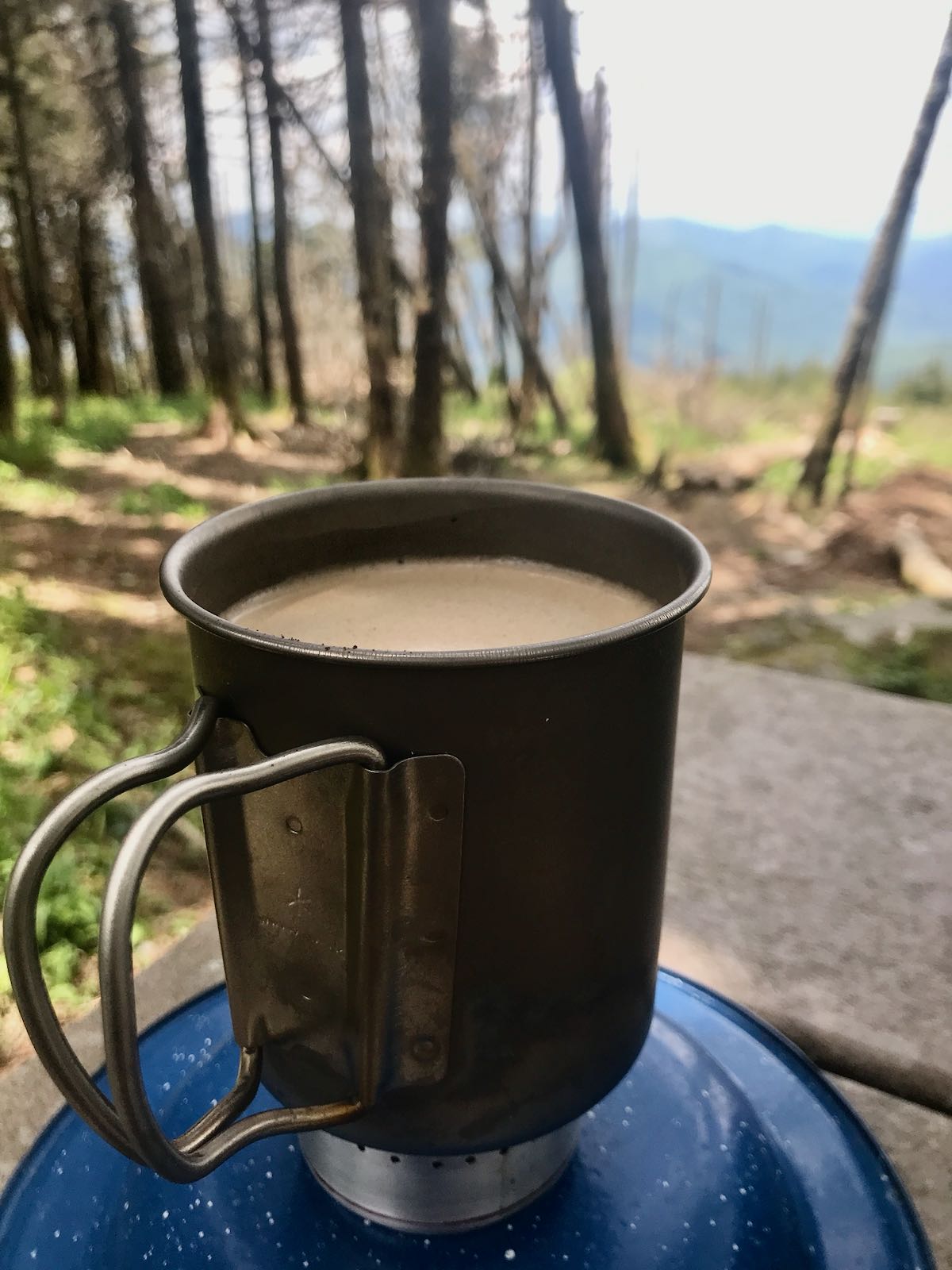 No activation is complete without brewing a cup of coffee on the alcohol burner!

I had a great time with the G90 in the field. I can see why it’s become such a popular transceiver as it offers incredible bang-for-buck (it can be purchased new as low as $450 US shipped). 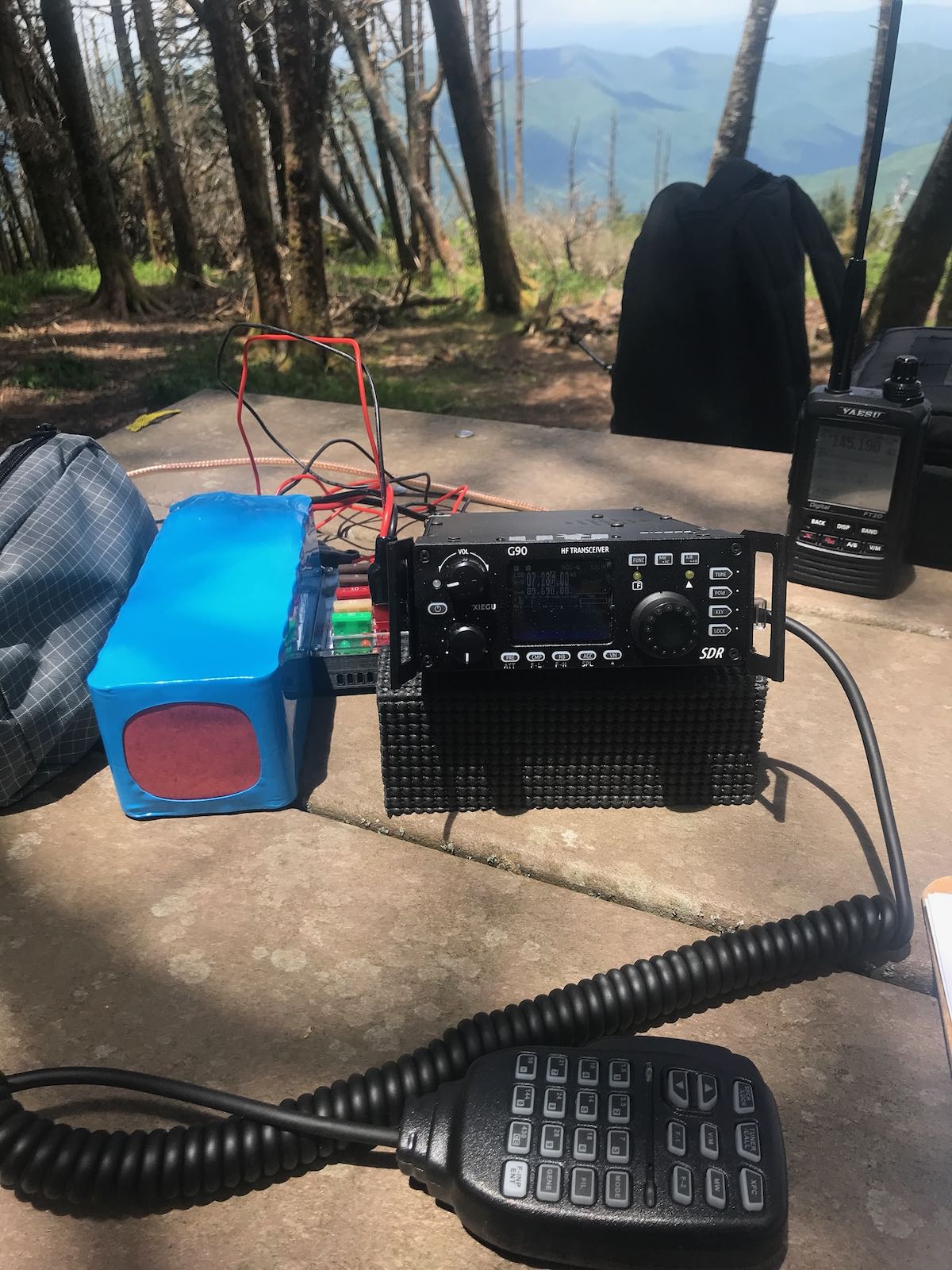 This week, the noise levels on the 40 meter band should be very high here in North America, so I plan to spend more time with the G90 settings and see if I can mitigate the QRN a little better. I’d welcome any tips from G90 owners.

And yes, I’m already eyeing a couple of parks to activate next week!

Post Readers: Please comment if you’re familiar with the Xiegu G90 or any of the other Xiegu transceivers.

This entry was posted in Portable, POTA, QRP and tagged G90, Parks On The Air (POTA), POTA, Xiegu, Xiegu G90. Bookmark the permalink.