[QRPers: Please note that the following is a re-post from my shortwave radio blog, the SWLing Post.]

Regular SWLing Post readers know that I’m a ham radio operator (call sign K4SWL). Being a shortwave radio enthusiast, of course, I spend most of my time on the air in the HF portion of the amateur radio spectrum. Contacting distant stations and connecting with other ham radio operators around our little planet gives me immense joy.

Most of you also probably know that I’m a fan of all things Antarctic, so it should come as no surprise that I really wanted to work VK0EK: the Heard Island DXpedition.

Thing is, my life has been so hectic lately, I’ve barely been home during the Heard Island DXpedition (March 29th – April 11th). And the days I have been home, VK0EK’s signals have been incredibly weak.

In short: timing and propagation were all working against me.  And VK0EK was soon to pack up and come back home. I was becoming desperate…and beginning to lose hope that I’d make any contact with this unique and rare entity in the isolated stretch of ocean between Madagascar and Antartica.

My hope was waning.  Then, Tusday evening, I gave a presentation about shortwave radio at the Blue Ridge Amateur Radio Club. On the hour-long drive home, I stopped by my good friend Vlado’s (N3CZ) to confess my troubles to the radio doc.

Now it just happens that Vlado has a much better antenna set-up to work DX than I do, and what’s more, (close your ears, fellow QRPers) he has an amplifier.

Most importantly, though, Vlado is a keen DXer.  He’s got 330 countries under his belt, and ever up for a challenge, routinely pushes himself to accomplish more with less. In January, with members of the local club, he entered a QRP challenge; he had 100 countries worked by the following month, all in his spare time. And a few years ago, Vlado actually built a radio of his own design and worked 100 countries within two months (you can read about that here).

So, of course, he was game to help me make a contact…even if it was a long shot.  A very long shot.

When I arrived at Vlado’s QTH around 21:00 local, VK0EK was impossibly weak, so we focused our efforts on 30 meters and FT4JA: the Juan de Nova Island DXpedition (another all-time new one for me).

After more than an hour of calling, FT4JA finally heard my call and (woo hoo!) I was confirmed in their log.

But what about Heard Island? 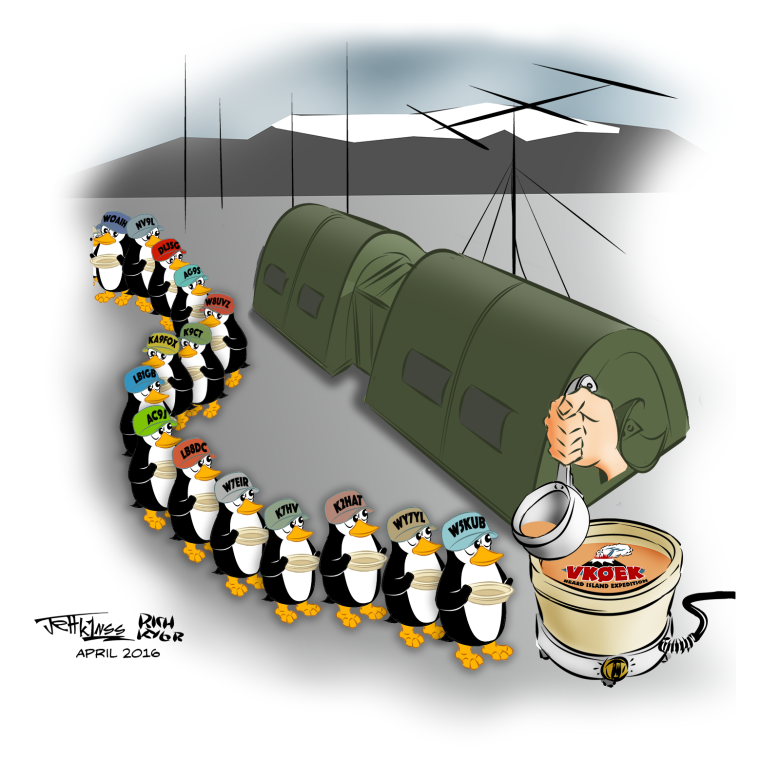 After working FT4JA, we moved down to 40 meters where VK0EK was slightly louder than before. Well, maybe it’s not impossible, I thought hopefully. Just next to it.

Between QSB (fading) and tuner-uppers, my ears were bleeding trying to hear Heard’s minuscule CW signal–so faint, so distant were they.

After only about ten minutes of steady calling, Vlado made a sign to get my attention, and we strained to listen, very carefully.

VK0EK came back very faintly with just one letter incorrect in my call–it was enough that I didn’t catch it at first. But Vlado heard it, and after sending the call back a couple of times, then the report, VK0EK confirmed my call with a signal report, and I reciprocated.

Vlad and I leapt to our feet, yelling, “WOO HOO!” (and hopefully didn’t wake up any of Vlad’s neighbors).

Heard Island is actually running an online log that is updated live. We immediately looked there to confirm I was in their log, and was greeted with this great circle map and a line from Heard Island to my call sign in the States. Vlado made this screen capture as a momento: 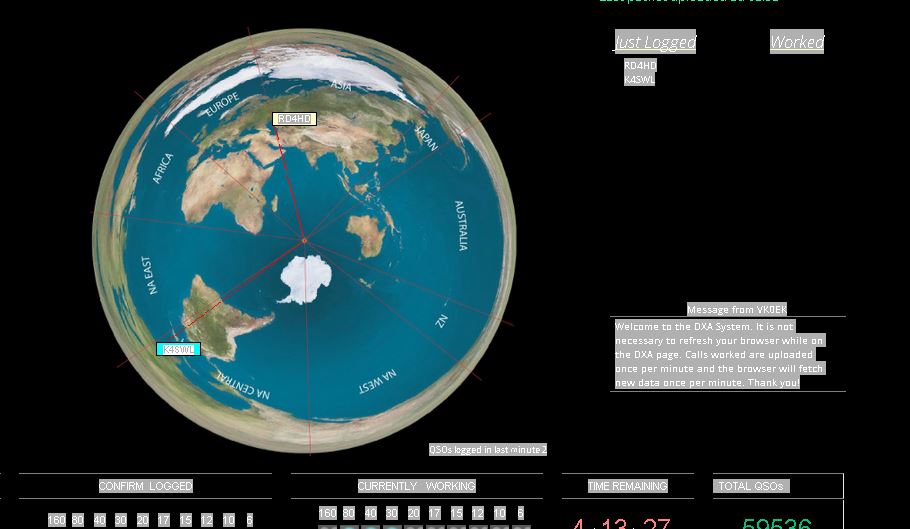 Here’s to good friends and mentors

In one incredible evening, I snagged two all-time new ones–and I owe it all to my good buddy, Vlado. Most importantly, I’ve been learning so much from him as he patiently coaches me through some weak DX with serious pileups. Plus it’s just always fun hanging around Vlado, the best broken radio doctor I know, to whom “challenge” is…well, a piece of cake.

Thanks Vlado, for your enthusiasm and patience–I’m lucky to have a friend like you!