“The Weakest Solar Cycle in 100 Years” 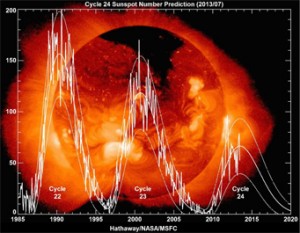 Thanks to QRPer.com contributor Eric (WD8RIF) for passing along this story from Sky and Telescope.

Scientists are unsure why this solar peak has been less than stellar:

Scientists are struggling to explain the Sun’s bizarre recent behavior. Is it a fluke, or a sign of a deeper trend?

The Sun is acting weird. It typically puts on a pageant of magnetic activity every 11 years for aurora watchers and sungazers alike, but this time it overslept. When it finally woke up (a year late), it gave the weakest performance in 100 years.<

What’s even weirder is that scientists, who aren’t usually shy about tossing hypotheses about, are at a loss for a good explanation. Three scientists, David Hathaway (NASA / Marshall Space Flight Center), Giuliana de Toma (High Altitude Observatory), and Matthew Penn (National Solar Observatory) presented possible explanations at this month’s meeting of the American Astronomical Society’s Solar Physics Division, but their results sparked a lively debate rather than a scientific consensus. [Continue reading…]

This entry was posted in Articles, News and tagged solar cycle 24, Spaceweather. Bookmark the permalink.

1 Response to “The Weakest Solar Cycle in 100 Years”