Updates: The Ten-Tec Model 539 QRP Transceiver and the Model 418 Amplifier 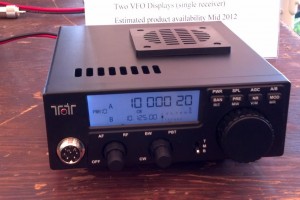 I just received this update from John Henry (Ten-Tec Software Engineer) this morning:

We are making progress in several areas on the 539, it is coming along, and improving every day. We don’t have a price point we can speak about yet, as we are still trying to find the best working parts for a few of the items on the rig. And those parts, may affect our target. But still, we will surely beat the <$1k price that we have mentioned already. The speaker is now enclosed within the unit, similar to the 599. This is something that we knew we would eventually get done, just didn’t have it ready in time for the ham ventions to date. We will have a fully functional 539 on display at Dayton. Pre-orders at Dayton? I don’t think I will be confident enough on a real ship date yet to be able to take orders at Dayton. I don’t want to take orders at Dayton, promise a ship date, and then have it delayed for parts reasons. So, as soon as we know the parts are final, and FCC has passed, and we have all of the lead times and production times worked out and in the schedule, then we will be able to take orders. We do have the 539s in beta testing now, tweaking software here/there, finishing a few features, and soon will be able to send it to others for their inputs.

The Model 418 100w amp is in the hands of external beta testers, and we are scheduling production start for end of May, beginning of July. The software is basically done, but of course, we are still tweaking it by adding a bit more protection and user features. We will have those added / tested / approved in the coming week or two. Beta tester input is extremely positive and they are sure we have a big hit on our hands because of everything that this amp provides is phenomenal.

John plans to give me another update just prior to the Dayton Hamvention.