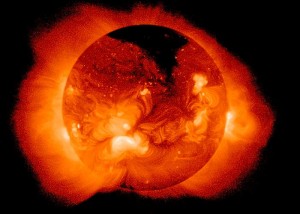 According to a new article published by NASA, we may have finally hit the rock bottom of the Solar Cycle and are on our way to Solar Cylce 24.  According to sunspot forecaster David Hathaway of the NASA Marshall Space Flight Center, the recent sun spots groups that have appeared on the sun belong to Solar Cycle 24. This is an encouraging development since we have been dealing with the solar minimum for what feels like an eternity in QRP time (nearly 2 years, according to NASA).

I’ve seen a lot of discussions on ham radio sites, in the ham press and in email groups about hams waiting to try QRP until the next sun spot cylce is in full swing. I don’t think this is necessary. In fact, I have been operating QRP throughout this lull and found that the solar minimum has had no effect on my daily/weekly QRP QSOs in the lower bands (160/80 & 40 Meters). I’ve also done some pretty respectable DX in the higher bands as well. Yes, those DX contacts are more rare, but it makes me appreciate each one even more.

With that said, QRP will really come alive in the higher bands in a couple of years. There’s no better time to hone your skills than to be practicing when the going is tougher.   It’ll make you a better operator. I promise.

So, box up that amplifier and sell it on eBay. Then, find the power knob on your transceiver and turn it down until you barely notice the power output meter trembling–hit the air and have some QRP fun!