Four Days In May is sponsored by the QRP ARCI

One of the highlights of my trip to the Dayton Hamvention last year was attending evenings at Four Days in May (FDIM), a QRP convention sponsored by the QRP ARCI that rather conveniently coincides with the Dayton Hamvention, which I try to attend annually. Though scheduling makes it difficult for me to attend all of FDIM’s daytime presentations, the camaraderie and innovation one discovers at the evening sessions is wholeheartedly worthwhile.

Last year, I snapped quite a few photos at FDIM which I planned to post following the Hamvention. Unfortunately, shortly after the Hamvention, my laptop began displaying signs of an early demise.  In haste, I archived my photos on a portable drive, where they remained buried for a year.  I just rediscovered this photographic treasure, and thought I’d share it with readers; looking through them rekindled my enthusiasm for FDIM 2013, which starts next week!

A great characteristic about FDIM is the array of QRP products offered by QRPers for the community. More often than not, these products are fairly priced, and often in support of the QRP community rather than major profit-making ventures.

For example, the North Georgia QRP Club produces affordable wood stands for QRP rigs. They’re incredibly simple, but fully finished and beautifully designed, just the thing to prop up your QRP portable at the right angle for desktop use. 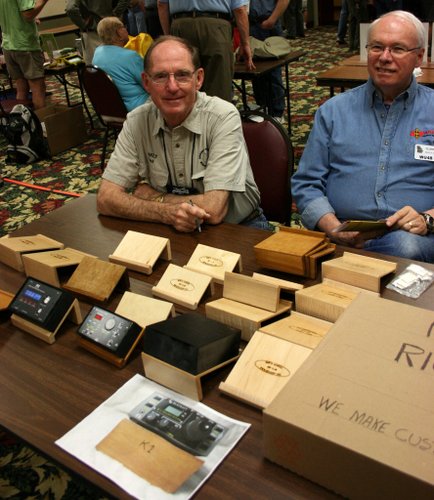 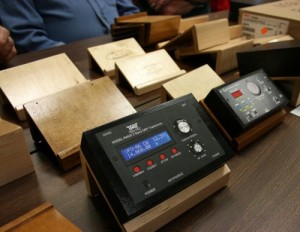 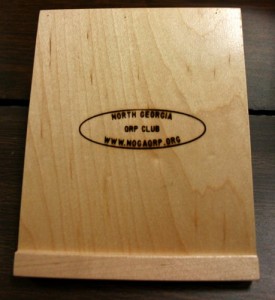 The club can even accommodate custom orders for other rigs. Check out and purchase these on the NOGAQRP website. 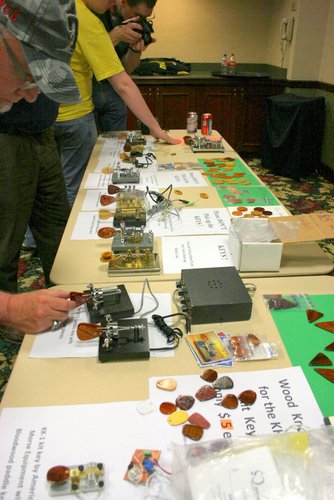 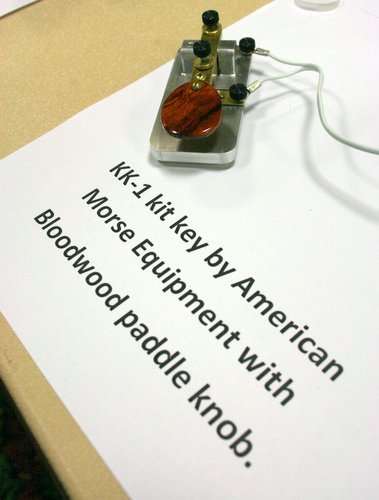 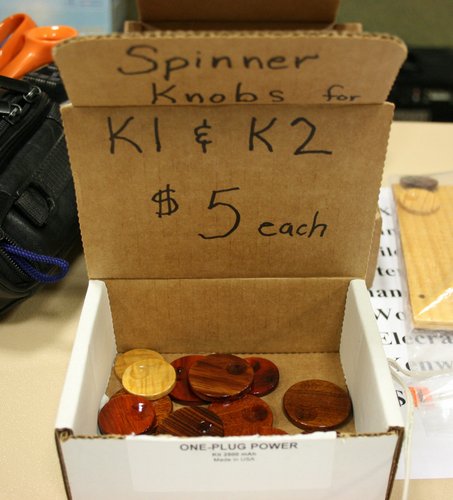 As you can see from the photos, each piece is perfectly finished and has great character, as one might expect of real wood.

I also ran into Dennis Blanchard (K1YPP) and his wife, Jane, who were signing and selling their books. I wrote a review here on QRPer about Dennis’ story of the challenges and joys of through-hiking the Appalachian Trail. If you haven’t read Three Hundred Zeroes: Lessons of the Heart on the Appalachian Trail, you’re in for a treat. I’m hoping Dennis will attend FDIM this year.

Dennis, being a hard-core QRPer, trekked with ham gear in tow; he brought his kits to FDIM: 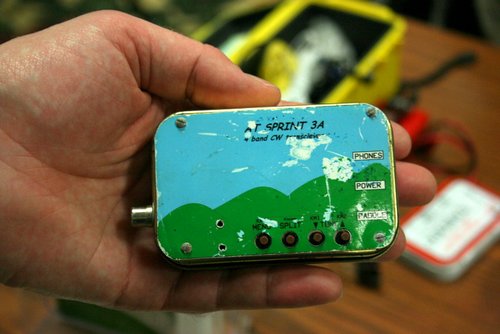 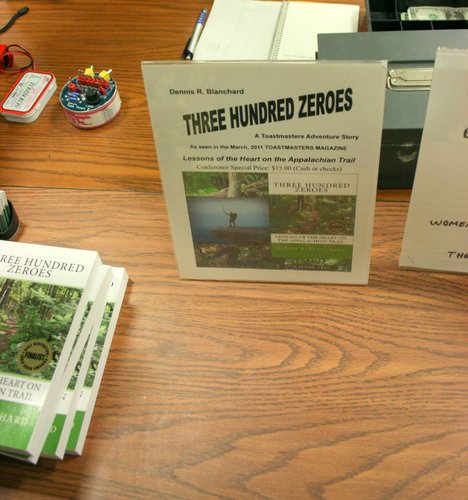 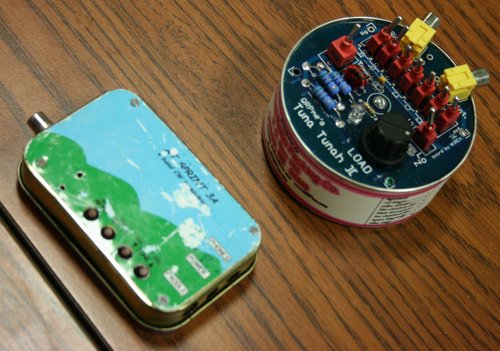 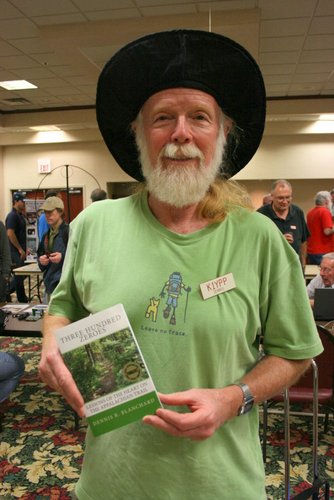 There were a variety of keys and paddles to be seen, of course; offerings range from the home brewed to gorgeous Italian Begali designs: 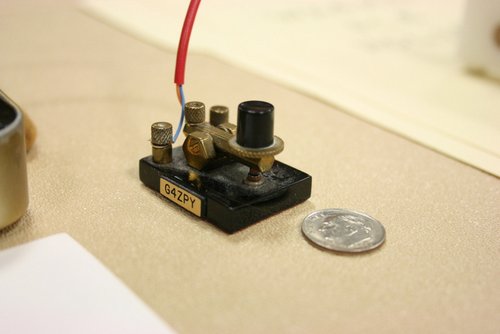 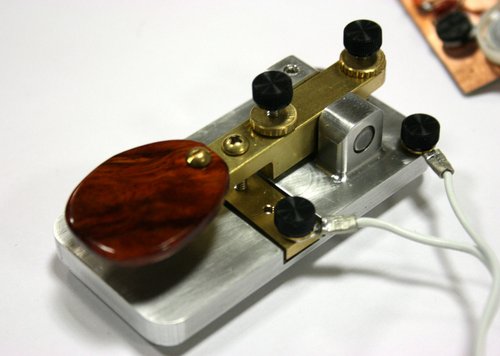 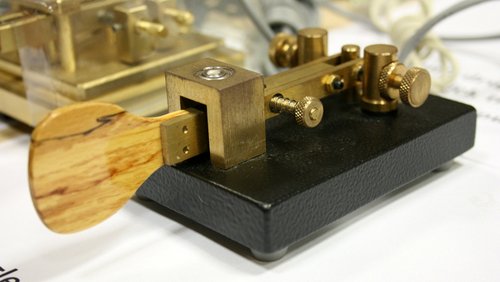 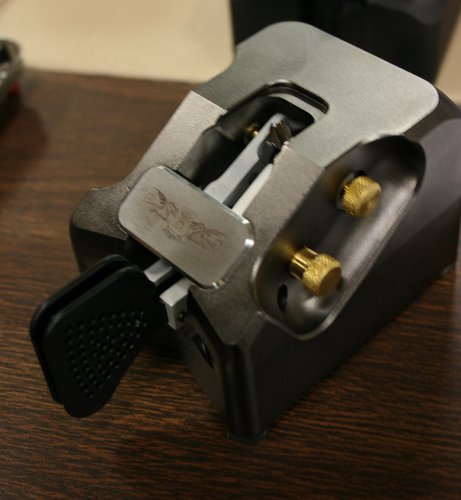 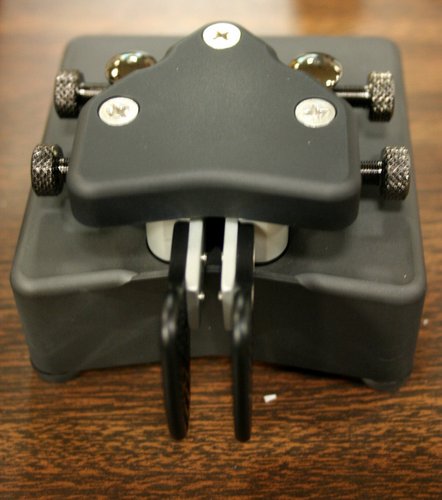 One paddle that really caught my attention was QuadraBug, a creation of WB9LPU. What makes this gem stand apart from other “Bugs” is that not only will it form “dits” automatically, but it also forms “dahs.” Truly, an amazing work of engineering. I searched the web for a video of the QuadraBug in action, but found nothing. [UPDATE:  Thanks, Yan for finding a video! See video below.]  This year, I’ll take a video if I’m fortunate enough to see it again. 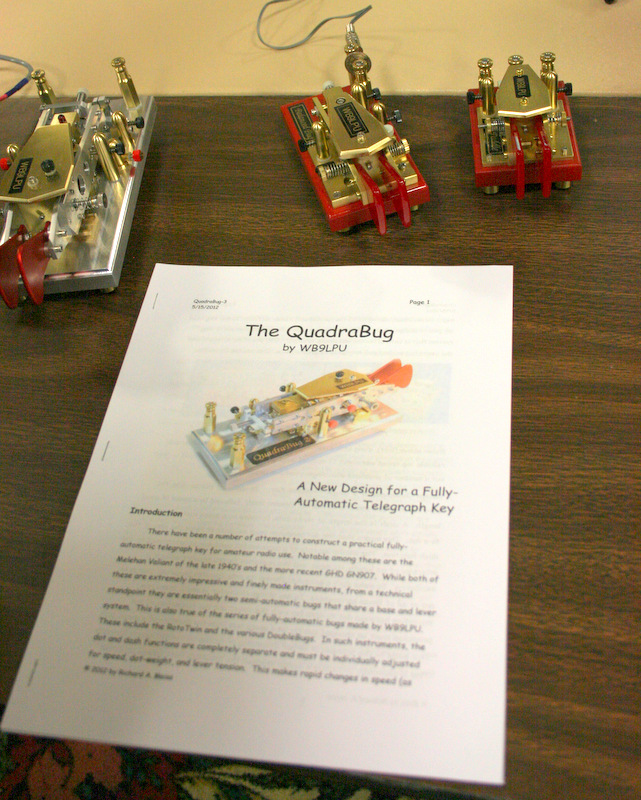 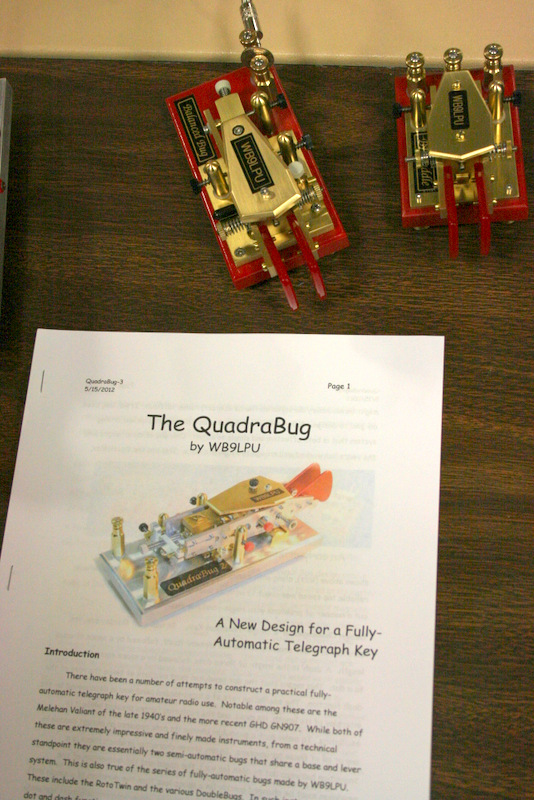 There were an amazing number of home-brewed projects on display, and even a home-brew contest. I didn’t capture photos of them all, but I did manage to snap a few.

One that really caught my eye (being a shortwave receiver enthusiast) was David Cripe’s (NM0S) version of Hutch’s Radio. The original Hutch’s Radios were built by US and British POW’s in WWII. Built in canteens, often from confiscated parts, these radios gave POWs hope by allowing them to tune in the outside world, via the BBC WS and Voice of America. In the spirit of the original, David challenged himself to build his version prior to FDIM, with original parts of the era, and in “secrecy.” Secrecy? As many of the components had to be purchased from suppliers on eBay, David tried to intercept all of the incoming packages without his wife noticing. His success was brief–alas, his wife discovered the mission–but fun; still, the end result was a very cool piece of historical recreation with a humorous story to match: 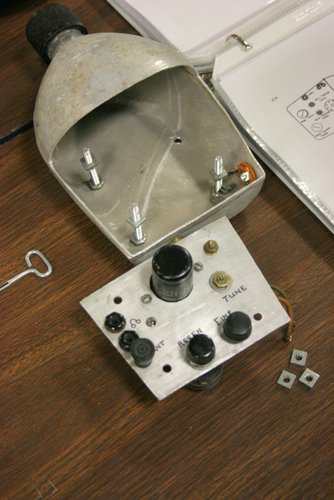 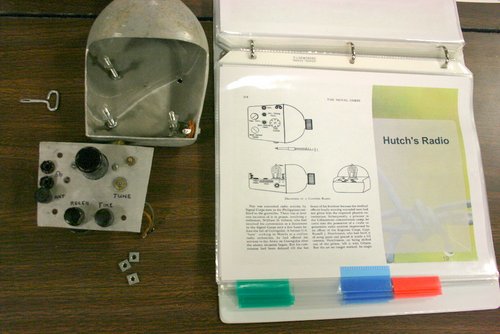 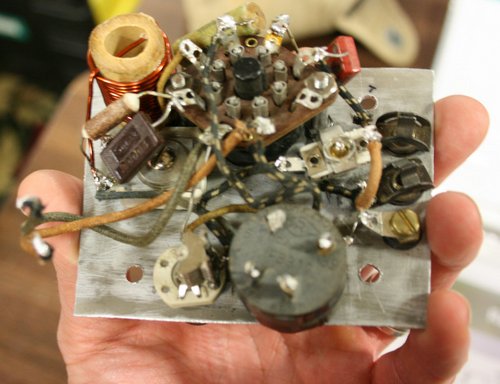 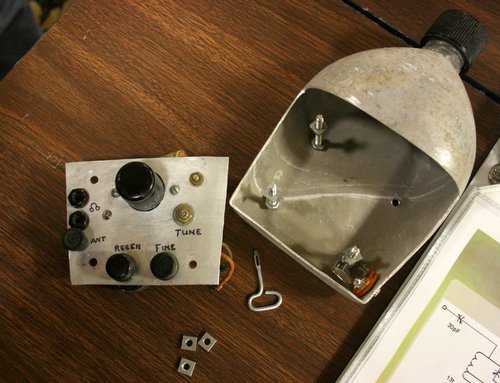 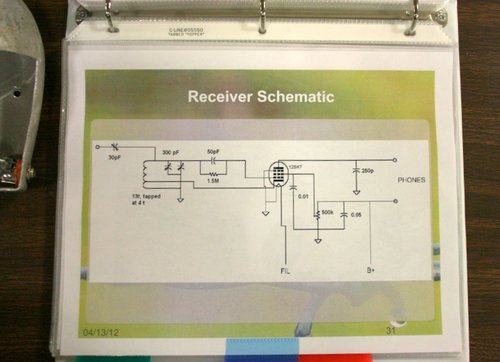 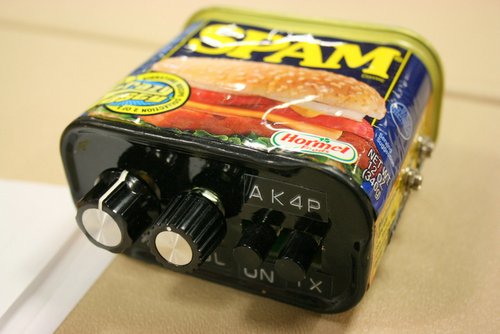 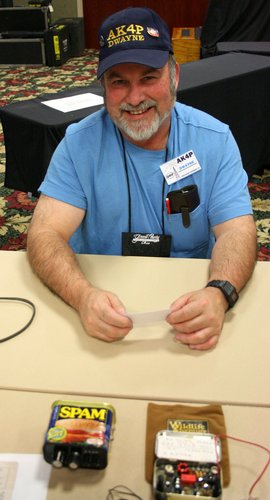 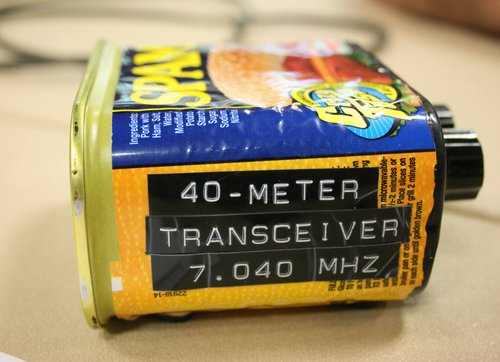 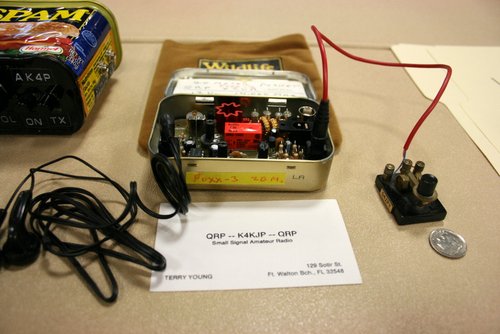 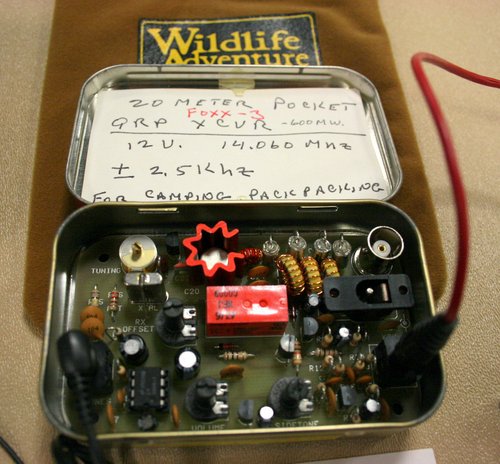 And Alan Shapiro, NM5S, should have won a prize for the most compact set of CW paddles.  These paddles are so small that they can be clamped onto your log book. Much to my surprise, they were amazingly easy to use, and would be a great addition to any field-portable radio: 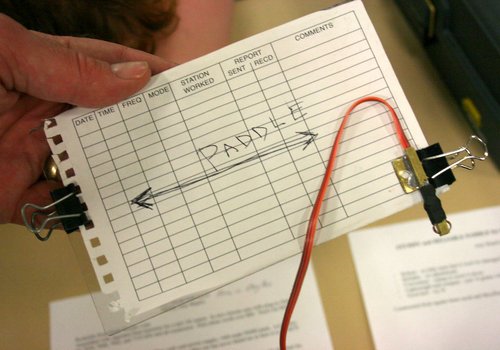 If FDIM 2012 is any indication (yes), this is a mere sampling of the stuff you’ll see at Four Days In May 2013.  I encourage you to attend: if nothing else, make a little time either Thursday, Friday or Saturday evening to visit the evening displays at FDIM–they’re free and open to the public.

If you can’t attend, I hope you’ll earmark your calendar for a future date. I do plan to bring my camera again this year and will share some photos. Hopefully, I’ll post them a little earlier this go-around!

Hope to see you at FDIM and the Hamvention. For the third year in a row, I will be representing my charity, Ears To Our World (ETOW), at an inside exhibit at the Hamvention. We should be in booth 601 in the East Hall. Please feel free to stop by and introduce yourself! (And if you feel so inclined, you can even donate a few bucks to our worthy cause.)  See you there–!